On this day: One driver’s heartbreak, another’s underdog glory 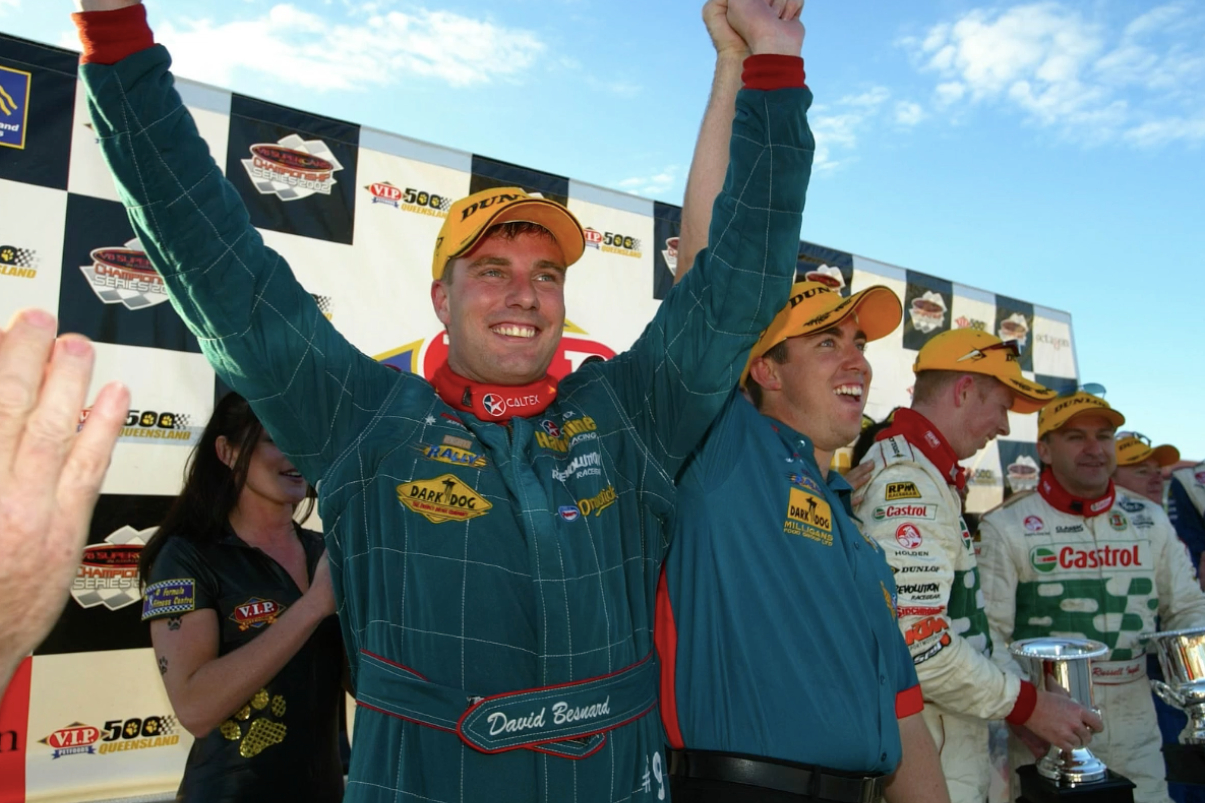 Few enduro underdog victories have had as many different storylines as that of David Besnard and Simon Wills in 2002.

On September 15, 2002, Besnard and Wills combined to claim a stunning Queensland 500 victory for Stone Brothers Racing.

SBR had enjoyed success with Marcos Ambrose in 2001, but its run to three straight championship-winning seasons was born out of Besnard and Wills' giant-killing breakthrough.

The Ford team had a bright start to the weekend, with Ambrose qualifying on pole for the 161-lapper.

The #9 Caltex Falcon was in the hunt all day, with neither Besnard or Wills having previously won a race in the championship.

That all changed after a dramatic final few laps, which saw the lead change in heartbreaking fashion for Greg Murphy.

It even more remarkable for Wills who - after leaving Briggs Motor Sport mid-season - was acting as a fill-in for Wayne Gardner who was only available for Bathurst. 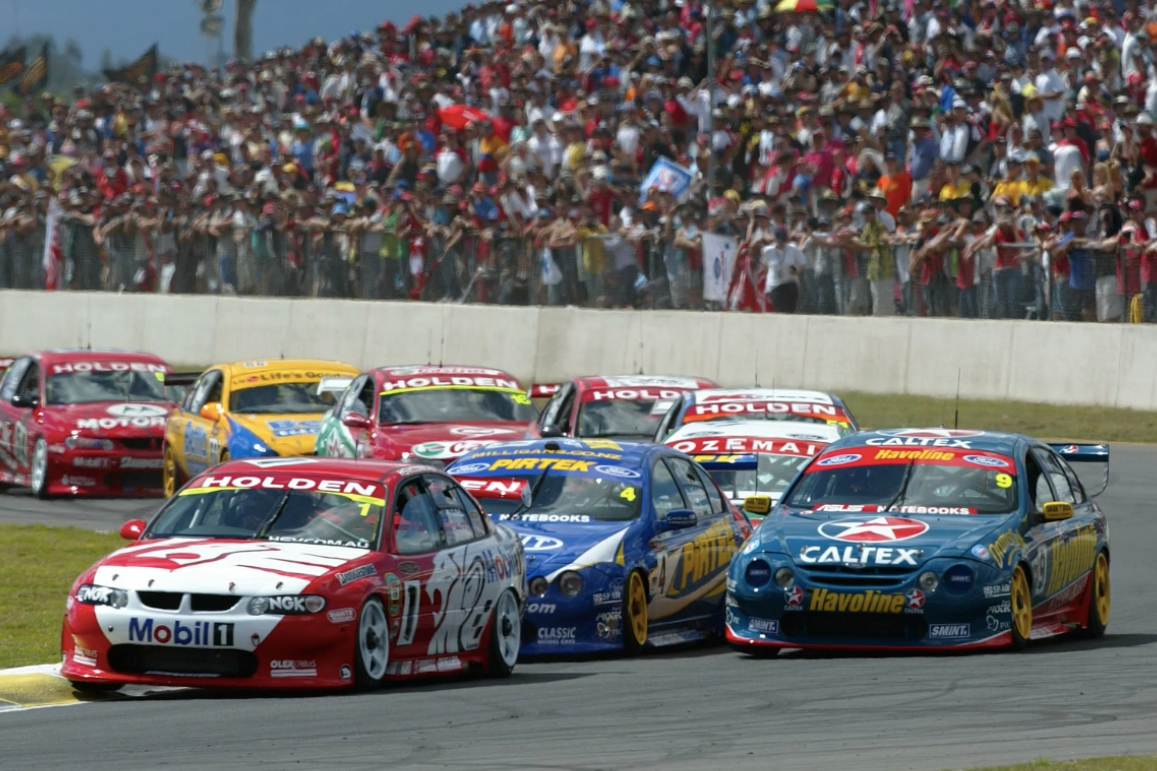 Besnard and Wills led 43 of the race’s 161 laps at SBR’s home venue, with Ford desperate to break a 12-month long winless drought.

Commodores had won 12 rounds on the bounce dating back to the 2001 season, which was dominated by Mark Skaife.

Skaife, who claimed a third straight title in 2002, wouldn’t even see the end of the race.

The sister Holden Racing Team car of Jim Richards and Tony Longhurst claimed fourth from 20th on the grid.

Skaife and teammate Jason Bright went out with engine dramas. 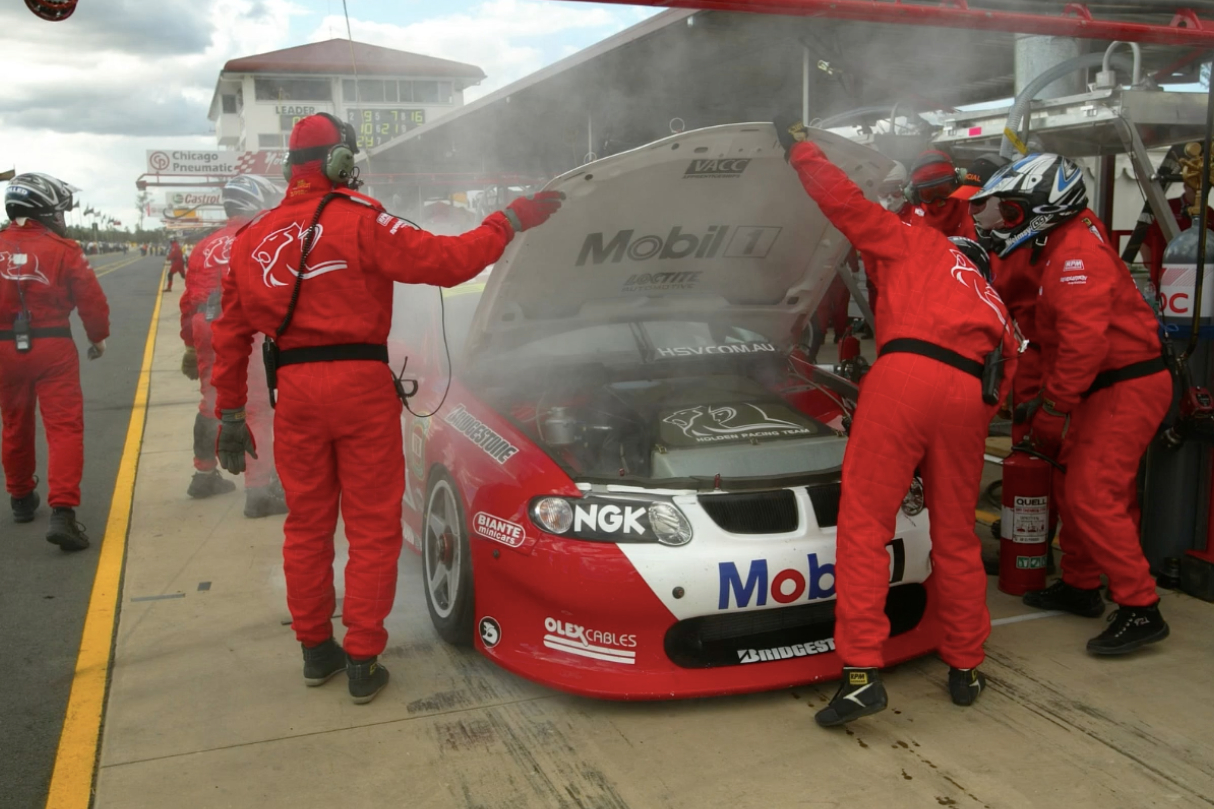 Notably, a teenager by the name of Jamie Whincup made his championship debut in the race aboard the second Garry Rogers Motorsport Commodore alongside speedway veteran Max Dumesny.

Ambrose was only good enough for fifth.

The day belonged to the other SBR Falcon crew, Besnard and Wills combined for the upset of upsets.

In a race which saw nine cars fail to finish, the result was only known until the dying seconds. 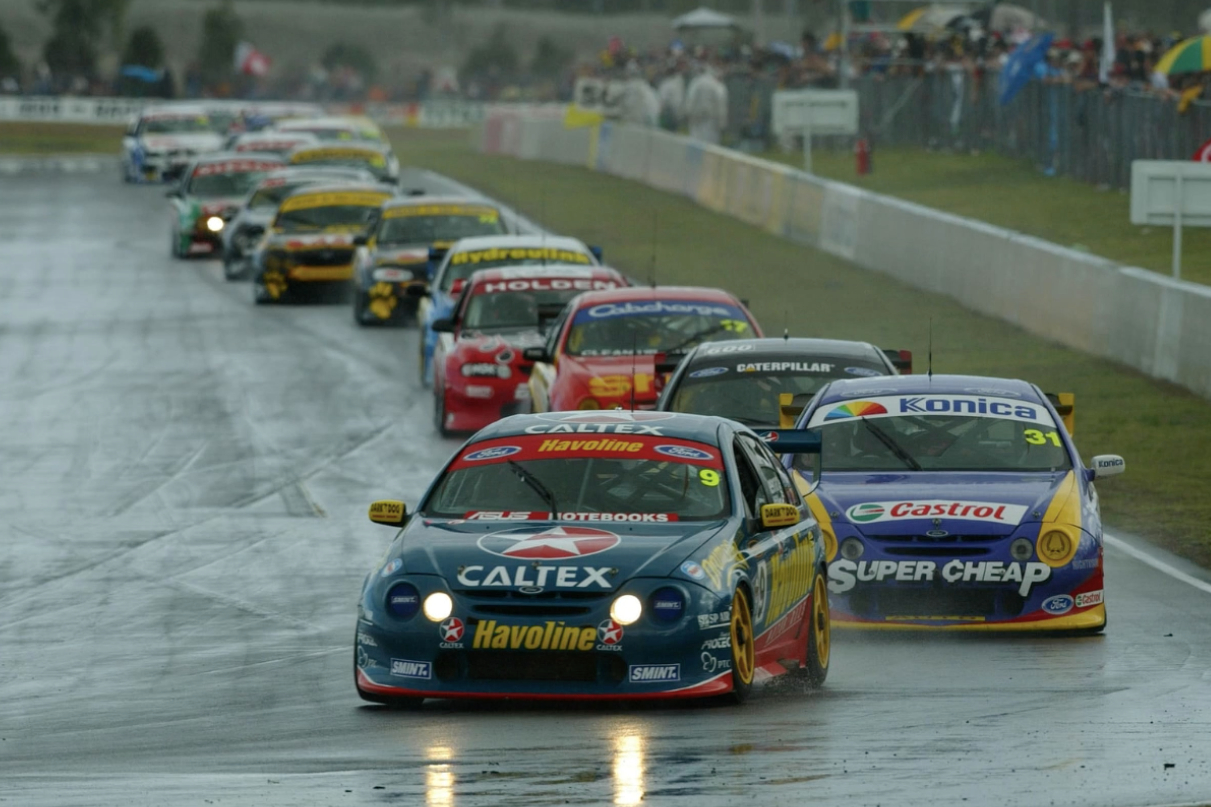 Besnard was running second and making inroads on Murphy.

However, there was a major question mark over Murphy and whether the #51 Kmart Commodore had enough fuel to reach the finish.

It was bad news for Murphy, who faced a three-lap sprint to the flag with Besnard behind, safe on fuel.

On lap 160, Murphy’s car coughed out of Turn 3, and Besnard sailed through. 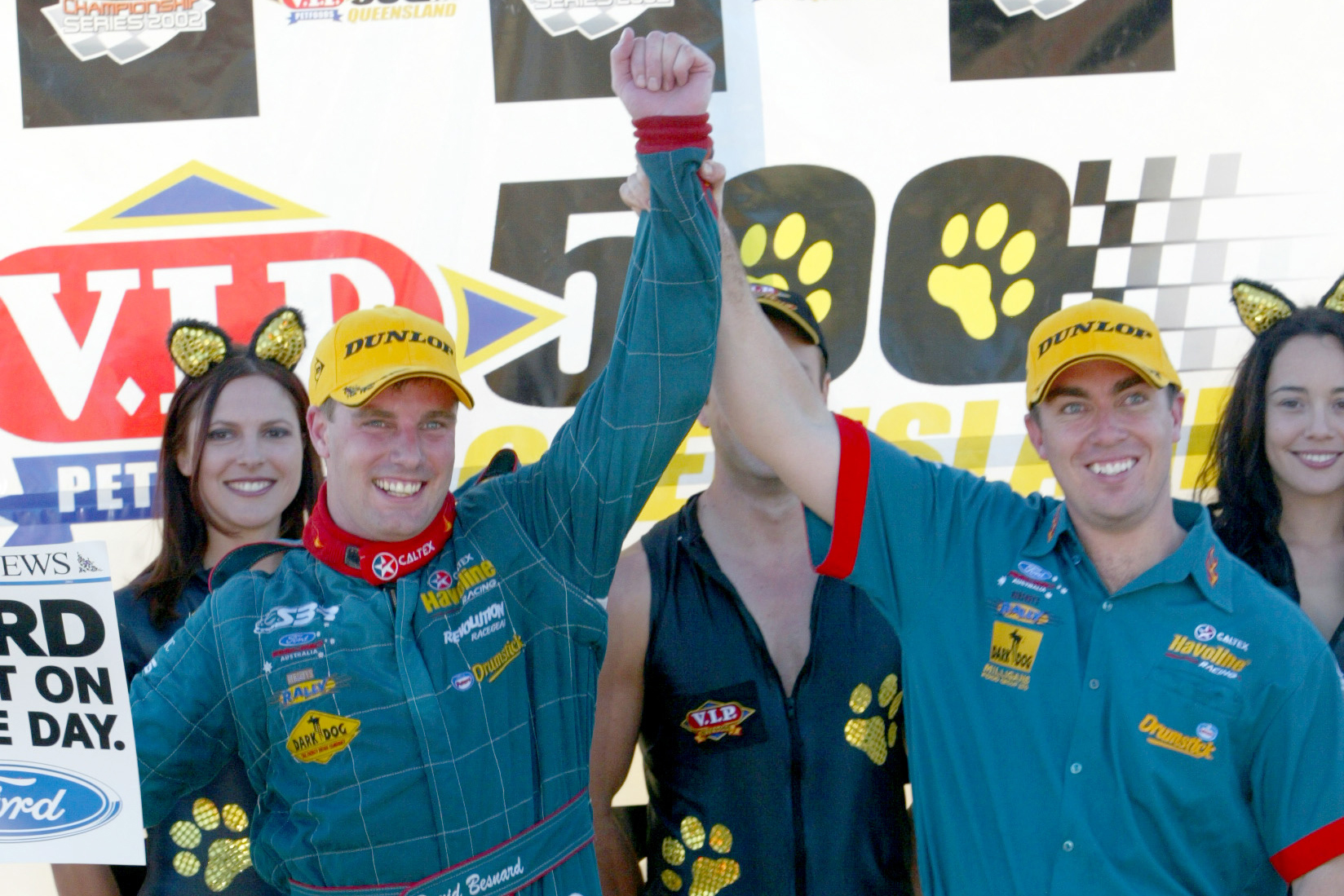 Murphy could only watch the green Falcon streak away, before he was tipped into a spin at Turn 6 by Steven Richards after another cough.

Besnard met the chequered flag, which was being waved by Dick Johnson, whose name emblazoned the circuit’s pit straight.

It was a combination few gave a chance of winning, with both drivers boasting remarkable stories amid their journey to the top.

Besnard, a karting junior, suffered a major Formula Ford accident at Eastern Creek Raceway in 1995 and broke his leg.

He made a brave comeback and won the title 12 months later, before embarking on a career Stateside. He won the 1998 US F2000 National Championship and entered in the following year’s US Formula Atlantic Championship. 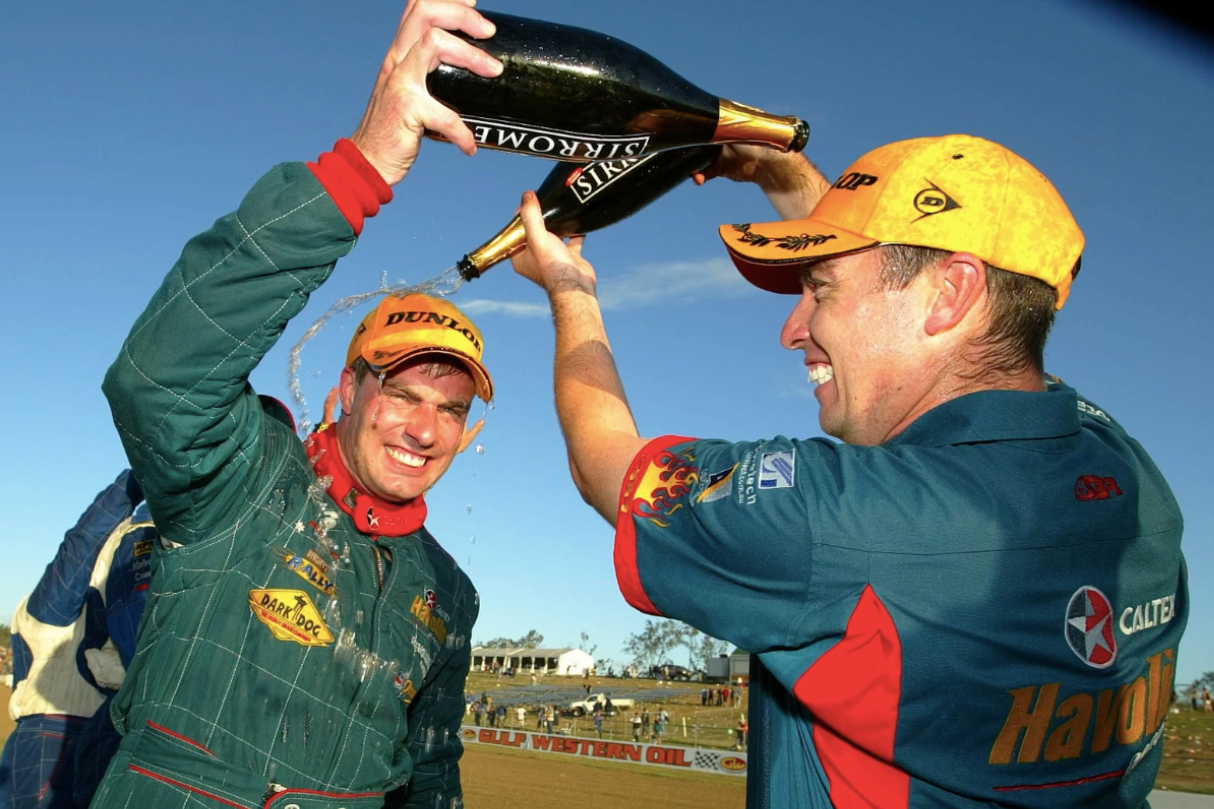 He returned to Australia and competed in the the Konica V8 Supercar Series and the Bathurst 1000 for SBR.

In a devastating twist of fate, Gardner crashed the Caltex Falcon out of the 2002 Bathurst weekend after a major practice accident.

Besnard moved to Ford Performance Racing before shifting to WPS Racing, and claimed a remarkable Tasmania win in 2004 from 29th on the grid.

He also drove for the likes of Briggs Motor Sport, Team Dynamik and Brad Jones Racing in 2007. 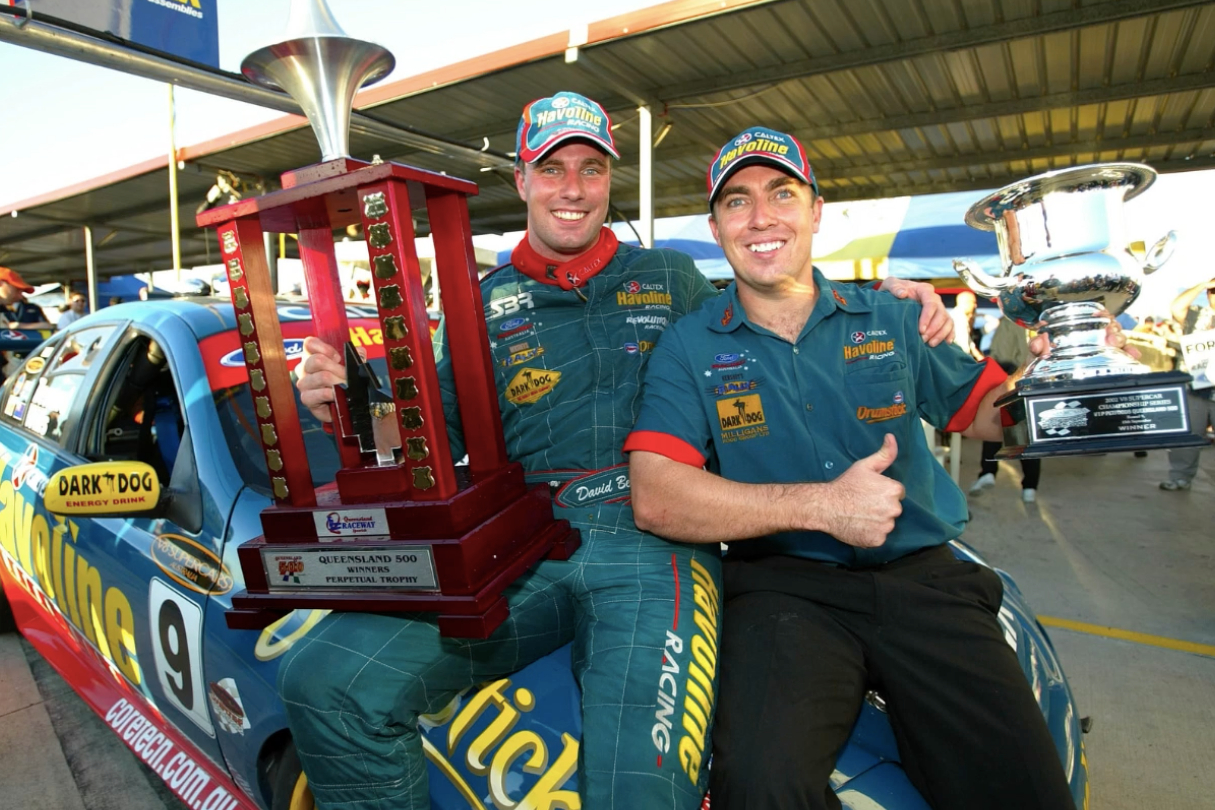 Regardless, the 2002 Queensland 500 win was the highlight for both drivers, with Besnard returning to SBR and claiming Bathurst podiums with James Courtney in 2007 and 2008.

"It was very satisfying,” Wills said of the win in the years after the race.

"I jumped in and led my whole stint and once we won the race it was quite neat to see the Briggs guys that I got along with well come out and clap on the wall for me.

"It was a one-off drive because Wayne Gardner wasn’t available and could only do Bathurst.

"I think everyone thought Marcos would be the one that year to break the Holden winning streak but we were pretty happy it was the green [Caltex Havoline] team and not the blue [Pirtek] one."