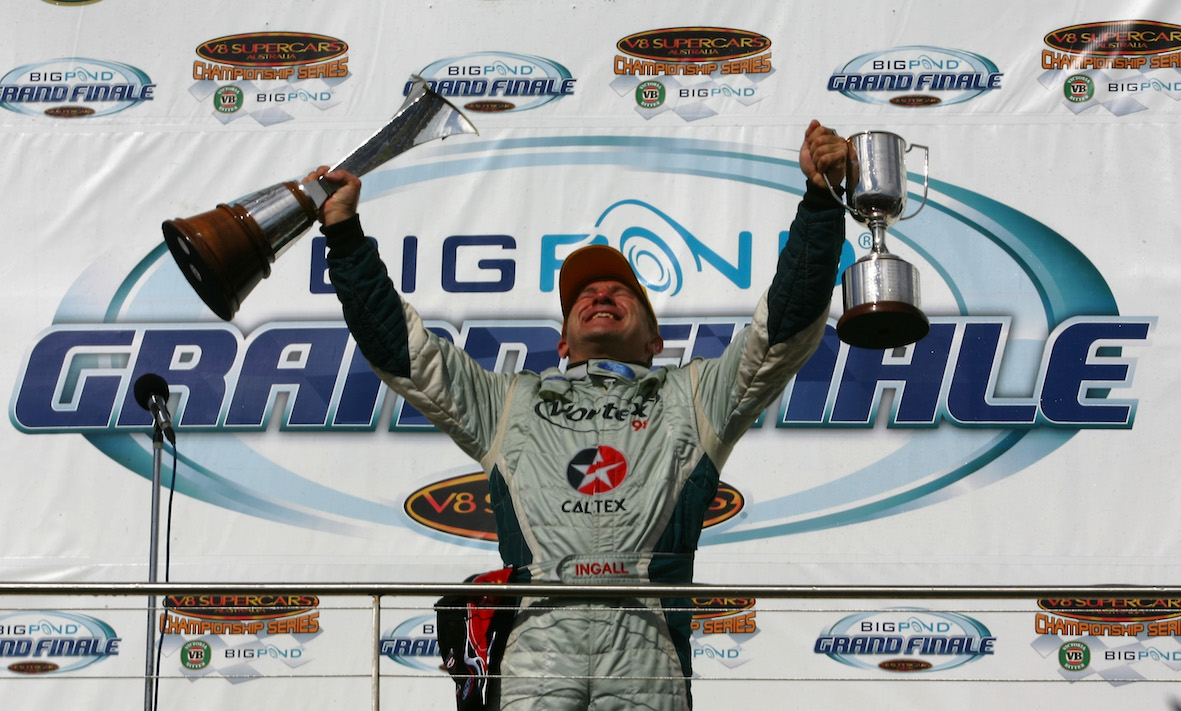 It only feels like yesterday that Russell Ingall was performing Dunlop-killing burnouts at Phillip Island celebrating his maiden V8 Supercars Championship crown.

But can you believe it was already 11 years ago, on this very day – November 27, 2005 – that the perennial bridesmaid finally broke through for his first championship win in the top motorsport category in the country?

But on his day of glory at Phillip Island the 2005 championship was an-all Ford affair to be decided between he, Triple Eight’s Craig Lowndes and Ingall’s Stone Brothers Racing teammate Marcos Ambrose. 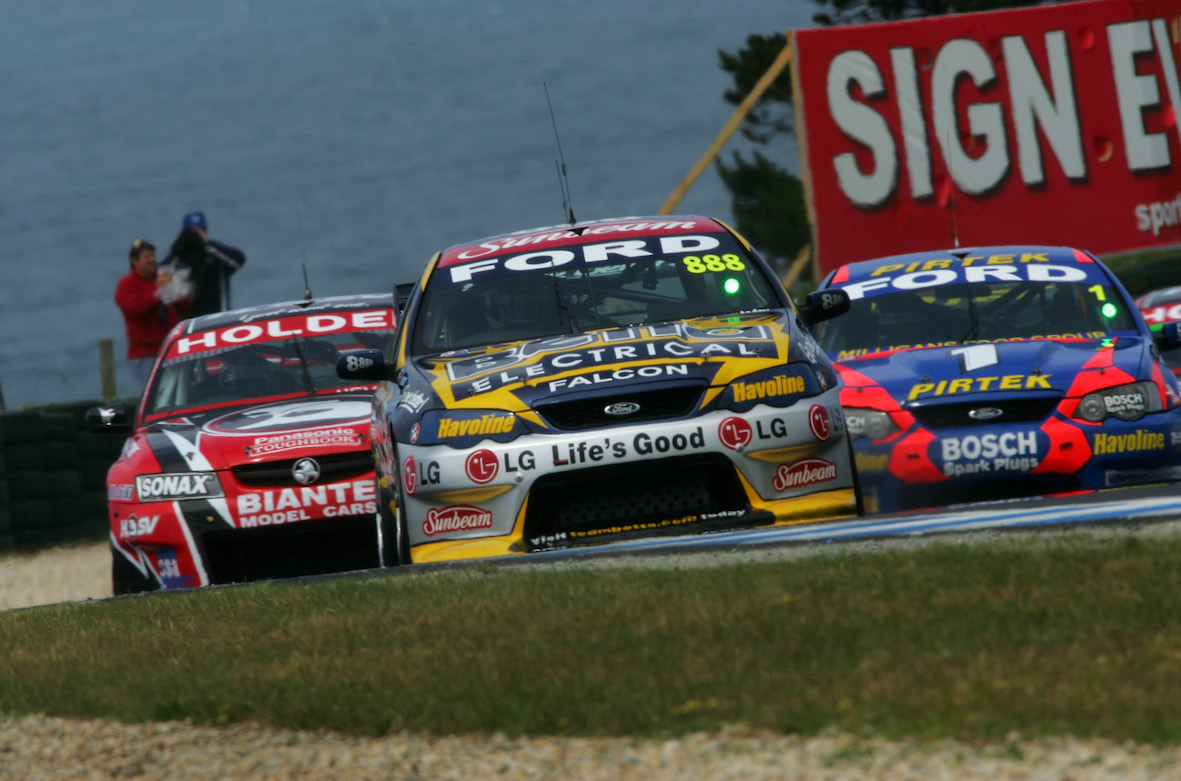 Ingall came into the weekend with a 49-point series lead over Lowndes, needing only to finish in eighth position or better to claim the title if Lowndes won each of the weekend’s three races.

While Ingall was the man most likely, Lowndes went into the weekend aiming to win each race but needing the Caltex pilot to have issues to snatch the title.

Ambrose, driving the Pirtek Falcon, was a long shot to win his third consecutive crown.

The 2003 and 2004 series champion was departing the following year for a career in the US driving NASCAR and, while he was hungry to finish his last V8 Supercar race with a win, his real chance of taking the title was minimal. 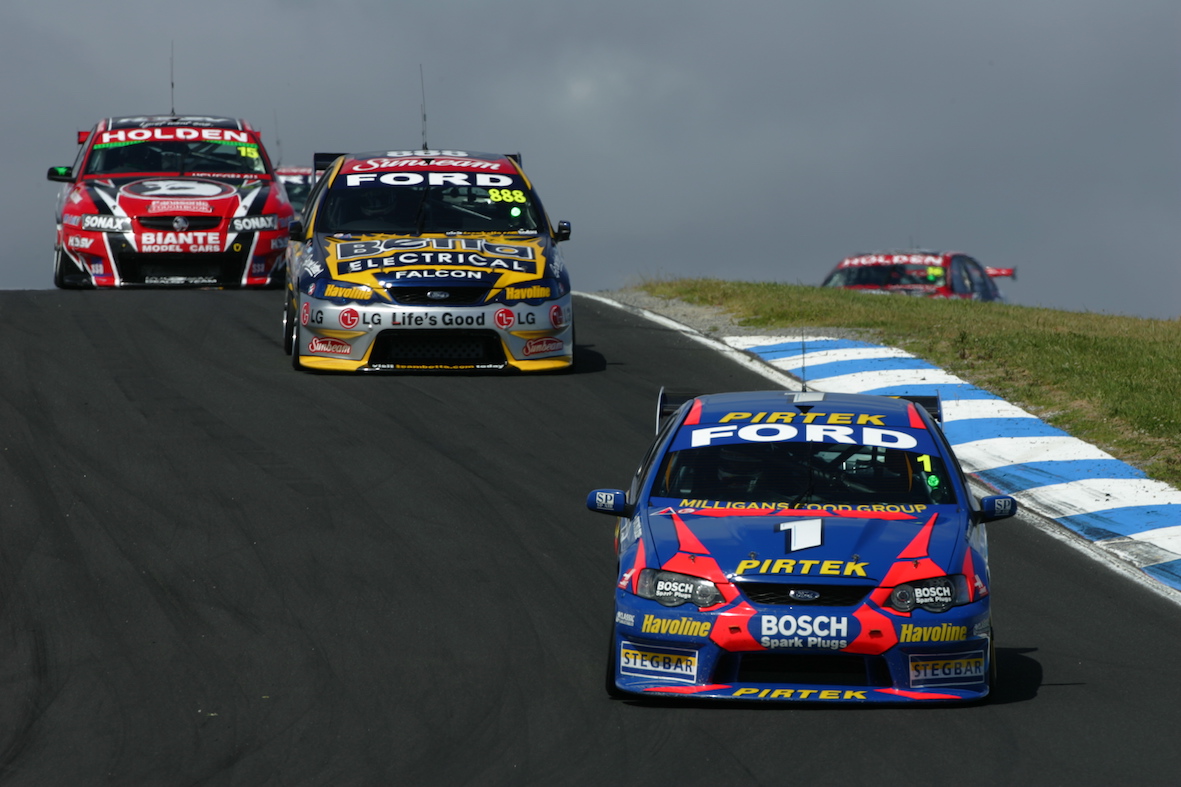 The wildcard in the pack for the weekend was Holden. The Phillip Island circuit was the nominated test track that season for virtually all of the major Holden teams, including the Holden Racing Team and HSV Dealer Team cars.

With 2005 Bathurst winners Mark Skaife and Todd Kelly in the HRT cars and Garth Tander and Rick Kelly in the HSV entries enjoying a late season surge of performance, the Commodore pilots could more than make life hard for the Ford title-challengers.

Ingall met his objective of finishing eighth or better, coming home in fifth before Ambrose turned the tables on Lowndes and took victory in Sunday morning’s second race with Ingall fifth again.

Heading into the third and final race the equation for Ingall to claim the title was straightforward. If Lowndes won, Ingall needed to finish 19th or better to be crowned champion.

Ambrose stormed away from the start to record a convincing race and ultimately round win for Stone Brothers and Ford in his farewell to the championship but the title showdown was a fizzer between the other two Falcon aces.

Lowndes was controversially penalised with a drive-through pit lane penalty after a spare wheel nut rolled into the fast lane as his crew was setting up for his pit stop.

Triple Eight’s Campbell Little questioned the integrity of the decision and V8 Supercars’ motivation for the penalty over the team radio for all to hear – and earned a $10,000 sanction of his own for his comments!

This indiscretion meant Lowndes dropped well down the field, racing back to finish 15th in the race and just recovering enough points to narrowly take second in the championship from Ambrose.

It’s hard not to forget the enduring image from that day of the Caltex Falcon performing smoky celebration burnouts on Phillip Island’s front straight – a beaming Ingall hanging out the door enjoying the moment.

“I’m waiting for it to sink in,” he said post-round.

“I’m very happy for the team and glad I can give one to them. 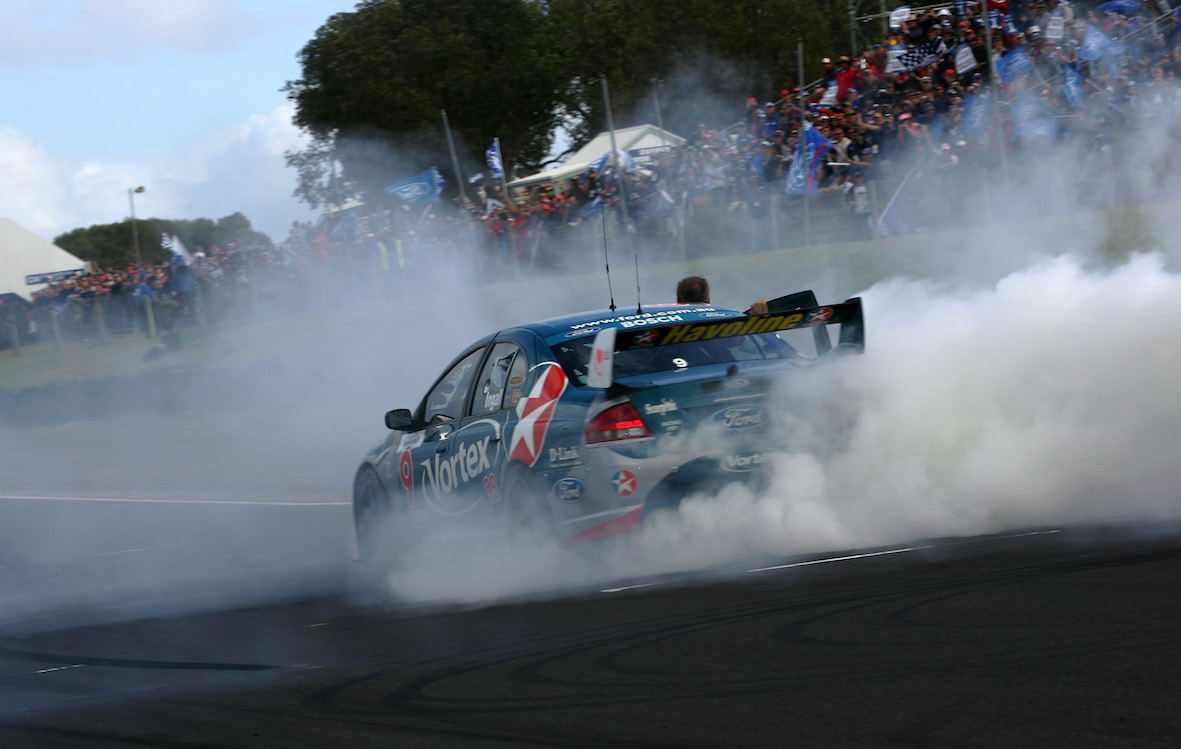 Ingall said he would have enjoyed racing more aggressively during 2005 but for the points system of the era, where consistency was the key to overall triumph.

“I had to change my strategy with this point system. After 10 years I will take what ever I can get,’’ he said.

HSV Dealer Team’s Tander and Kelly filled the podium positions with Ambrose, saving face for Holden on a day largely belonging to the blue oval.

As the celebrations of a new champion raged on, further down pit-lane, another piece of V8 Supercar championship history was starting its long and successful journey.

Having completed his last race for the fledgling Tasman Motorsport, a young Jamie Whincup was unceremoniously gaffer-taped to a trolley, rolled down pit-lane and delivered by his old team to his new squad at Triple Eight Race Engineering.

But that, is the start of a whole other story…