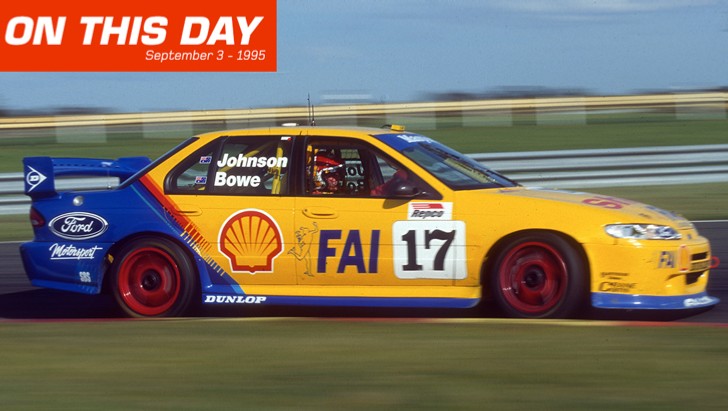 This weekend is Father's Day but it was on this very day, September 3, 20 years ago that V8 Supercars Hall of Famer Dick Johnson gave himself the best Father's Day present possible - a second straight win in the 1995 Sandown 500.

Johnson and John Bowe paired up in the famous #17 Shell-FAI Falcon EF to complete a Ford 'blue wash' of the podium on that sunny Sunday at Sandown, leading home the Peter Jackson Falcon of Glenn Seton/Allan Grice and the second Shell-FAI entry shared by Dick's son Steven and Charlie O'Brien. 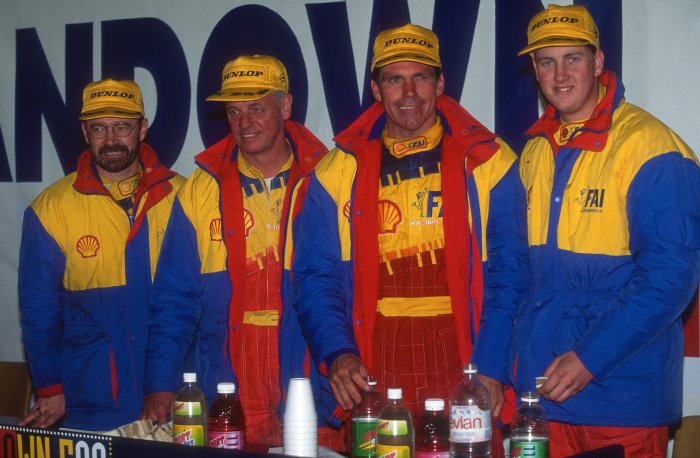 However, though Bowe crossed the line nearly a minute in front of Seton, the road to victory had not been an easy one for the lead Shell Falcon.

After qualifying seventh on the grid, they had to overcome a 10-second stop-go penalty for passing a recovery vehicle in the slow lane of pit lane - but such was the pace of the #17 Falcon (and a good call to make their first pit stop under Safety Car) they were able to charge their way back through the field, hit the lead on lap 115 and go on to claim victory. 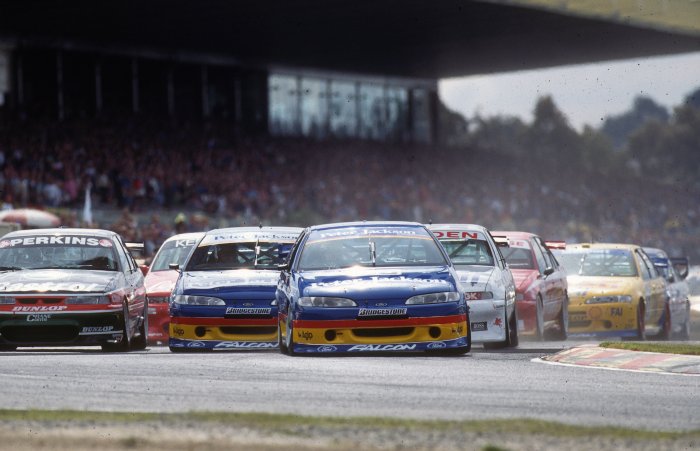 Johnson had tried for years to win the Sandown endurance race through the 1980s and early 1990s. He finally scored victory in 1994 (he and Bowe started 15th!) and the floodgates were opened with another win 12 months later.

The win in the '95 Sandown 500 followed on from Bowe winning the ATCC that year and Johnson and Bowe winning the Eastern Creek 12 Hour production car race for Mazda the week prior to Sandown.

The V8 landscape was very different too back in 1995. For starters, the Sandown 500 was not a round of the championship, rather a stand-alone race at the completion of the sprint race-based Australian Touring Car Championship.

Then-Sandown 500 promoter Jon Davison had stocked up the grids for the race in the previous three years by permitting production cars to compete alongside touring cars, but 1995 was the first time in history that Melbourne's endurance classic had a field made up exclusively of Holden and Ford V8s.

In total, there were 21 starters for the 1995 Sandown 500 and an interesting blend of drivers with plenty of 'young guns' that would go on to make a name for themselves in the sport over upcoming years.

The Holden Racing Team paired its full-timers Peter Brock and Tomas Mezera together in the #05 Commodore, leaving #015 for Craig Lowndes, who had been sitting idle during 1995 working on European racing programs. 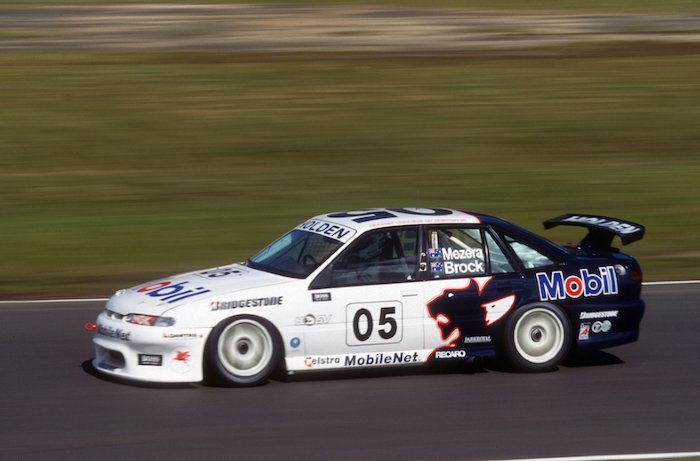 His Sandown co-driver, Kiwi Greg Murphy, was making his first-ever V8 race appearance on this day 20 years ago, having been signed up on the back of his efforts with Brad Jones' Audi Super Touring team during that year. 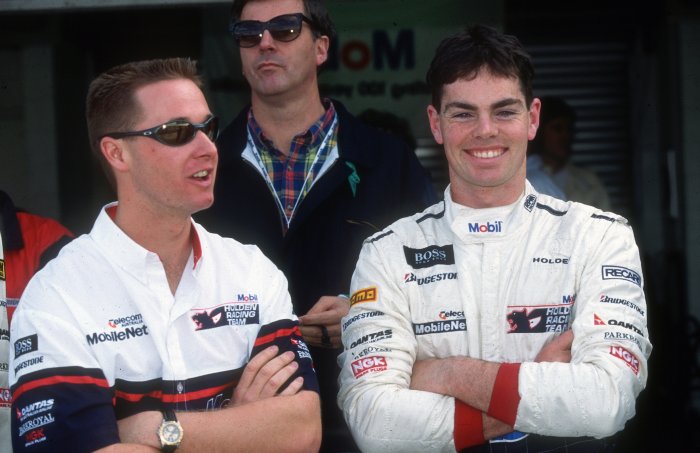 Lowndes sparkled in 1995 at Sandown on Saturday, claiming his first V8 pole position in the Top 10 Shootout 12 months after his first appearance with the factory Holden team.

But on Sunday he'd let youthful exuberance get the better of him in the opening laps and promptly spun himself off into the first corner sand trap while tussling with Glenn Seton.

It was a miserable day for HRT, the Brock/Mezera car the first retirement after 67 laps due to an exhaust issue and Lowndes/Murphy dropping a cylinder while running many laps down after the early-race spin.

The day also marked the debut of what would become a famous V8 Supercar driving combination: Larry Perkins and Russell Ingall. 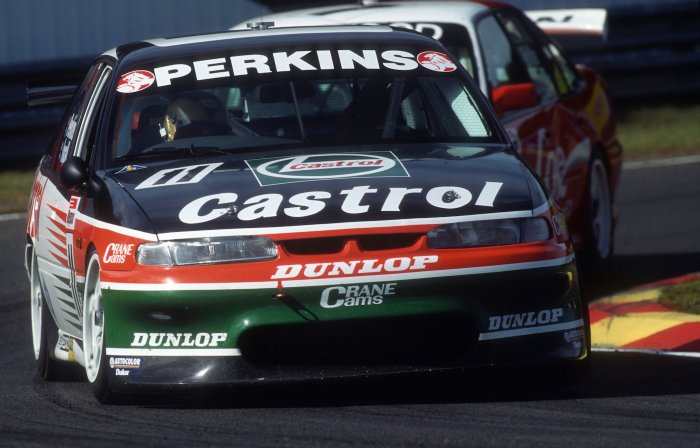 Ingall was signed by the Castrol Holden team boss to be his endurance co-driver in the wake of the death earlier in the year of his 1993/1994 partner Gregg Hansford.

The duo didn't have the pace of the Fords and were the top-finishing Holden, one lap down and fifth overall. As history shows though, they got their revenge at Bathurst a few weeks later!

Twenty years on and the Perkins/Ingall combination is back at Sandown next weekend - no one in 1995 could have guessed that Russell and young Jack Perkins would one day share a Holden Racing Team Commodore in the race! The two are testing at Winton today.

Glenn Seton had plenty happening this time 20 years ago with news breaking that teammate Alan Jones was leaving his employ - and taking sponsor Phillip Morris with him for 1996.

Jones would team with DJR team members Ross and Jim Stone to create Alan Jones Racing, which would become Stone Brothers Racing in 1998 after the brothers bought out the 1980 Formula 1 World Champion.

The race on this day 20 years ago also marked the final appearance in a touring car of two-time Bathurst winner (and 1972 Sandown enduro winner) John Goss, who shared a privateer Commodore with David 'Truckie' Parsons. They failed to finish with their Perkins-built Holden ending up in the sand with brake problems.

Just three cars finished on the lead lap on this day back in 1995 at the Sandown 500 with the Castrol Falcon of Tony Longhurst/Wayne Park fourth in front of the Perkins/Ingall Commodore.

Paul Romano and Troy Dunstan finished two laps down in sixth place and were the top privateer finisher home.

Hall of Famers Mark Skaife and Jim Richards were eighth in the single Winfield/Gibson Motorsport Commodore, delayed by a throttle problem that cost them six laps.

Just 11 of the 21 starters were classified as finishers as the 161-lap, 500-kilometre journey proved that the cars of the era were far from bullet proof.

Both of the Coke team Commodores failed to finish (Wayne Gardner/Neil Crompton out with drivetrain vibration and Brad Jones/Win Percy with wheel bearing failure) and the second PJ Falcon of Alan Jones and David 'Skippy' Parsons fell out after 136 laps with engine problems. 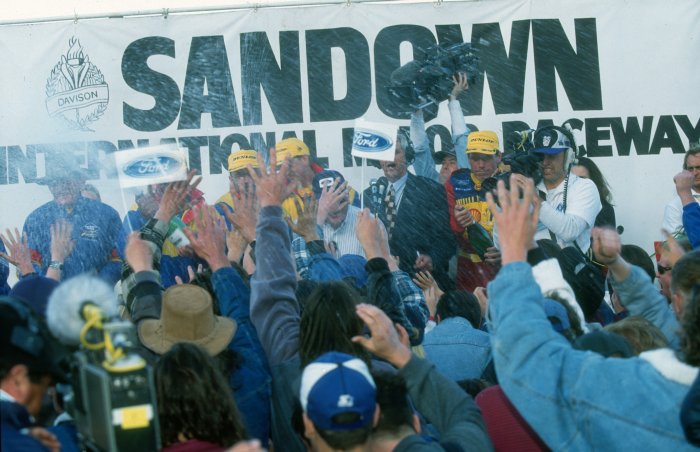 Much has changed in 20 years of top-line V8 racing, but the fact remains that getting a result in the Sandown 500 is still a brilliant launch pad for an assault on the Supercheap Auto Bathurst 1000.