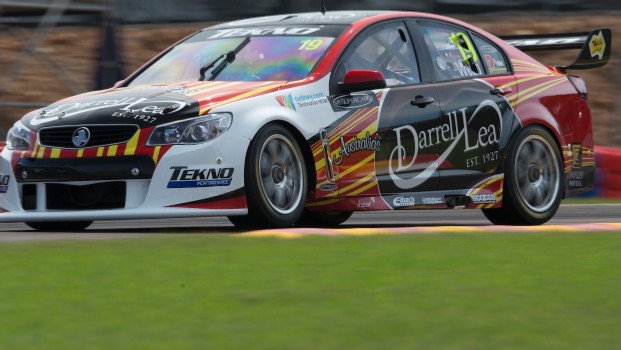 His name hasn’t been in the winners' list this season, but Jonathon Webb has quietly achieved and may well be one ofthe dark horses in this year’s V8 Supercars Championship.

Though he wasn’t a race winner, Webb – inhis Darrell Lea TEKNO Autosports Holden Commodore – bagged the most pointsat the last event in Darwin. Teammate Shane van Gisbergen had the secondhighest points haul there.

And while he wasn’t awarded the race win,Webb came out of Race 15 in Austin with the most points after the top threedrivers were slapped with penalties after issues relating to the safety carrestart.

It’s been a long time between drinks forWebb, who’s last – and first – V8 Supercars victory was at the Homebushstreet circuit in 2010. But with so much promise over the last two events, whenis Webb’s next win coming?

“We’re pushing hard and hopefully it’ssoon,” Webb said. “It is tough – there’s a bigger mix this year than ever,as far as drivers winning races. At the front it’s tough.

“Shane got a good start to the year and gotthose results under the belt – but we are definitely pushing hard.”

TEKNO looked like a force to be reckonedwith at the start of the season, when the team’s new recruit van Gisbergensecured ARMOR ALL Pole Position and started from the front row for both races.And while SVG has recorded wins this year, Webb hasn’t held up the trophy asyet.

At the start of the year Webb was confidentit would all come together – and each event he is looking morethreatening. He currently sits 10th in the points, just seven points shy of Holden Racing Team's James Courtney.

“As everyone saw, we came out and had agood hit in Adelaide – Shane being on the top step was above even ourexpectations,” Webb said.

The TEKNO team owner and driver said it wasfrustrating to know he earned the most points in Race 15 in Texas – after thetop three were penalised – but didn’t have a race win.

“Definitely after Texas and a few fourthswhere we didn’t quite get on the podium – it’s so close you can taste and smellit.

“We’re not quite there but it gives meevent more drive to push hard in Townsville for the car and the team.”

And while he agrees there was a lull inperformance around the Perth event, Webb didn’t feel there was a major issue with the car – it wasjust a matter of fine tuning and getting the car right for the circuit.

“After Darwin I feel like I’m in a goodplace,” he said.

Van Gisbergen told v8supercars.com.auqualifying was something he needed to improve, and Webb felt the same way,though he has made up positions in most instances (click here to see Webb's season progress, which overlays qualifying and race results).

“It’s definitely something we’ve spokenabout in the last couple of rounds – we need to really work onqualifying,” Webb said.

“But it’s not the be all and end all– we’ve shown we’re not qualifying that well but can still get goodresults.”

Webb looks forward to Townsville and istaking the opportunity to spend a few days at the destination before the eventstarts.

“I think, like any street circuit, it’s afine line between pushing as hard as you can and making sure you stay off walls.It’s a fast flowing track I’ve really enjoyed in the past. It deservesrespect.”

Tickets for the Sucrogen Townsville 400 are available through Ticketek.

Shane van Gisbergen  ›
15' Team Darrell Lea STIX ›
2013 Austin 400  ›
2013 SKYCITY Triple Crown  ›
2013 Sucrogen Townsville 400  ›
Stay In The Know
Sign up to the Virgin Australia Supercars Championship Newsletter
This website uses cookies to improve your user experience. By continuing, you will be providing your consent to our use of cookies.Ok