He admits he's trying to be calmer, but Nick Percat also insists he has no qualms about turning into a post-race television star after his second spray of a rival driver this season was broadcast at the Sydney Motorsport Park SuperSprint.

Percat, who earlier this year in Darwin blasted Will Davison's driving on television after an on-track melee, stormed into the Brad Jones Racing pit post-race to remonstrate with Dale Wood, after he drove into him on the cool down lap.

While Wood sat mostly stony faced, the Lucas Dumbrell Motorsport driver delivered an expletive laden spray, demanding he pay for the damage to his car.

"I only went down there to say 'don't crash into me on the in-lap because it has probably done $15,000 damage to the car' and then he didn't want a bar of it and it turned into what it did," Percat told v8supercars.com.au this week.

"To be honest I am getting more coverage out of that than the guy who wins the race.

"It creates some action, keeps everyone talking, makes the news and helps V8 Supercars with some good viewing."

But the Repair Management Australia Holden Commodore VF driver revealed his temperament was a key reason reasons he and team-mate Tim Blanchard swapped engineers before SMP. 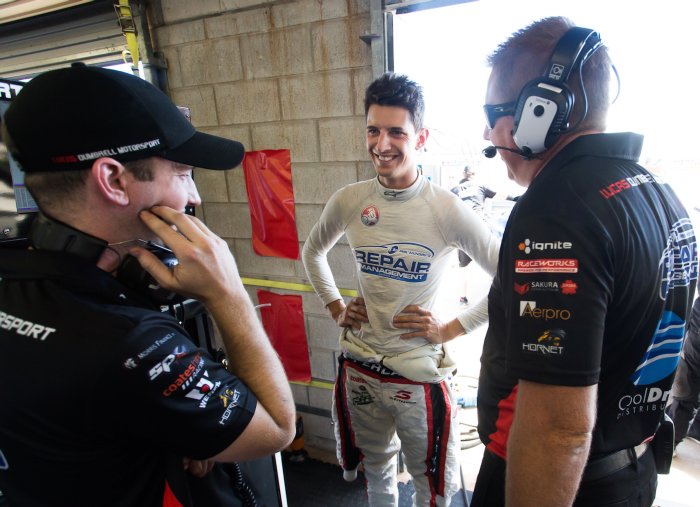 Percat's engineer Brendan Hogan shifted to the CoolDrive Commodore, while Chris Stuckey moved the other way.

"We had an engineer change on the weekend to one who is a lot calmer, so that was a positive," explained Percat.

"You only get as fiery as the person you are on the radio to and Brendan is really passionate about the sport and so am I.

"So we tried the engineer swap because we want to try and get a bit more angst into Blanchy and dial me down a bit. And that's why the personality swap with the engineers was perfect.

"I think it worked out really well."

Blanchard, who has struggled this year in his return to the championship for a variety of reasons including poor quality practice and testing tyres, has been on a physical and mental training targeting a lift in results in the Pirtek Enduro Cup.

The drama between Percat and Wood began during the opening race on Saturday when they clashed at turn seven and the GB Galvanizing Commodore driver gyrated off the track. He drove into Percat's car on the slow-down lap breaking an upright, exhaust and wheel.

"I think it's pretty dangerous," said Percat." I wasn't even holding the steering wheel properly because I was on the in-lap and talking on the radio and all of a sudden the guy next to you is driving into the side of it.

"It ended up costing us a decent result in race two because I ended up driving the race with a cracked upright so we had variable toe and camber."

Percat fought back with a strong ninth place finish in Sunday's 200km race, twice driving into the top 10 after qualifying only 17th because of a wheel nut failure and then being caught out on strategy by the rain that fell mid-race.

"I think any time we are in the 10 it's pretty impressive for our team because the budgets we run on compared to everyone else on pitlane is minute," said Percat. "We still do a good, solid job and try and get all the little things correct and make sure the cars are pretty easy to drive.

"You get back to where we should have been in that first stint was good and passing people like Frosty and getting on to the back of Whincup was pretty satisfying for us. Then we pitted and came out on cold softs and it rained so then we had to pit again straight away.

"Instead of starting again eighth or ninth we restarted 19th or 20th and then to drive back through everyone again was pretty good. The car was really good in the wet and it was good experience for the enduros with the normally changing conditions at Bathurst and Sandown."

Percat will be joined by Briton Oliver Gavin for the Pirtek Enduro Cup. The pair combined for the first time last year in a Walkinshaw Racing-prepared Commodore and finished a brilliant third in the Supercheap Auto Bathurst 1000.

While most Victorian teams will test early next week, LDM will run at Winton on Monday September 7, the week of Sandown.