Nissan Motorsport co-driver Aaren Russell took out a chaotic opening ARMOR ALL Race for the Grid at the RABBLE.club Sandown 500.

An early Safety Car followed by a heavy shower - and a burst of hail - meant the 20-lap race for co-drivers was far from straightforward.

Russell, teaming up with Andre Heimgartner, was in the group of drivers to stay out and brave the conditions on slicks.

Shell V-Power Racing kept its Falcons out, with Alex Premat and Tony D'Alberto finishing third and fourth from 14th and 12th on the grid.

By contrast, the Red Bull Holden Racing Team Commodores of early leader Paul Dumbrell and Earl Bamber came in for wets and had to settle for 11th and 16th.

Starting first on the grid thanks to Jamie Whincup's earlier efforts,  Dumbrell initially showed the pack a clean pair of heels. 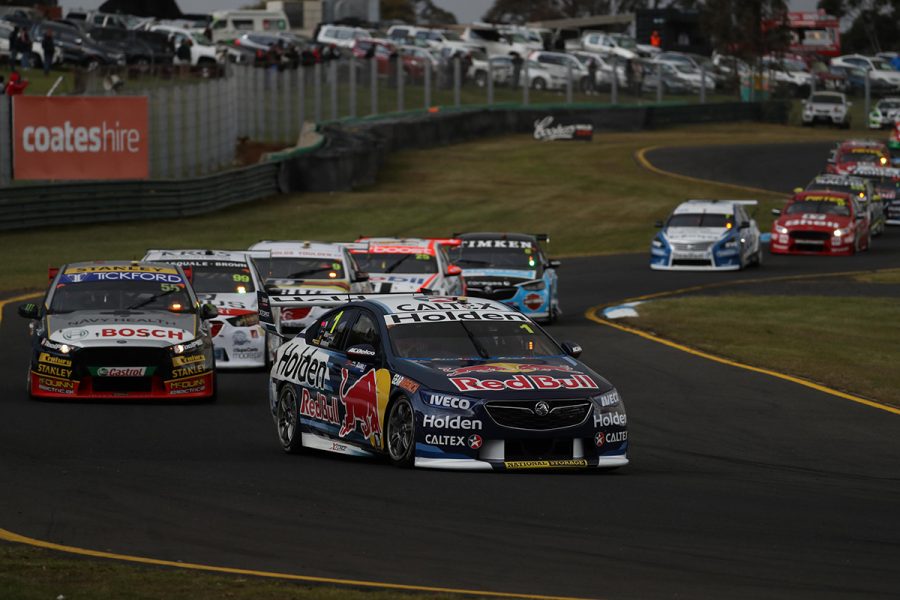 He led James Moffat by four seconds when the Safety Car was called on lap four, with Jason Bright's Preston Hire Commodore crashed at the final corner.

Bright tangled with Warren Luff - who started fifth but fell to 21st with a bad start - coming onto the front straight, firing into the outside wall.

Heavy rain and even hail started to fall, especially on the first half of the circuit, as the field came back to racing conditions on lap 10.

Dumbrell led half of the field into pitlane at the end of the tour for wet tyres, as Moffat stayed out to head those on slicks.

Moffat went off at Turn 4 on lap 12, forced wide by contact from Macauley Jones, who was sandwiched between Moffat and Aaren Russell.

That handed Russell the lead as the rain subsided, the Nissan sitting 1.5s ahead of Youlden with Premat and D'Alberto third and fourth.

Youlden closed up behind the ACE Nissan in the closing laps, but Russell did enough to bring it home.

“The rain threw everything at us," Russell said.

"I was so nervous in the car when it was wet down one end and dry at the other.

“I kind of got lucky and got to the lead and just pushed on, our car was so good then actually.

“I’d get a gap on Luke and then the lapped cars would ruin everything… that was tough. But I’m just pumped for everyone in the whole organisation."

The result means Heimgartner and Reynolds will share the front row of the grid in the second Race for the Grid.

“That’s the most nervous I’ve ever been watching that,” Heimgartner added.

Premat – despite overshooting Turn 3 late – and D'Alberto grabbed third and fourth, for Scott McLaughlin and Fabian Coulthard later this afternoon.

“It was a team decision. The track was wet on four corners, but the rest was pretty dry,” Premat said of staying on slicks.

“The car was pretty good, I gained three or four spots, and on the restart too. I’m pretty happy about the work. It’s a great start.”

Jones came home fifth, with stewards to investigate his incident with Moffat, who had to settle for 10th.

“It was very wet into Turn 4, we both braked at the same time," Jones said.

“I tapped him a bit, he got sideways, then the car behind me hit me square in the back and I just continued to hit Moff in front of me.

“I’m sorry about that, but I think it was very tough conditions.”

Moffat added: "There’s not much you can do when you get drilled from behind.

"I felt the first hit from Macauley and that was fine, but it sounds like he’s been drilled from behind.

"Aaren Russell was probably pretty keen to get things moving and doesn’t realise you can’t just drive into the back of people, you’ve got to drive to the conditions sometimes.

"He’s young and eager and you learn those things along the way.

"We were able to recover back to 10th, so not the end of the world, but disappointing to give up that track position, that’s for sure."

Dumbrell was the first car home on wets in 11th, 45s behind Russell, in Whincup's Red Bull Holden.

Will Brown took 12th, ahead of Steven Richards, Jack Perkins, David Russell and Earl Bamber, who had do double-stack behind Dumbrell.

Garry Jacobson's Nissan picked up major front-end damage early, when he made contact with the rear of D'Alberto's Falcon at Turn 4.

He crossed the line 20th, two spots ahead of Luff, with stewards opting against any further action on the latter's early clash with Bright.

Alex Rullo overshot the first corner on lap two, and later retired, along with Bright and Bryce Fullwood. 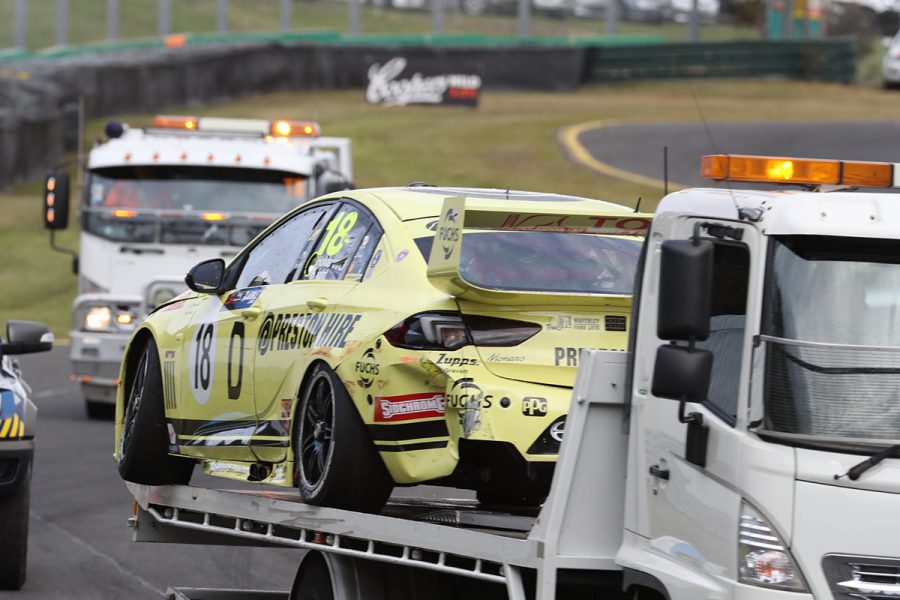 The second ARMOR ALL Race for the Grid starts at 4:15pm, with those results determining where drivers start Sunday's PIRTEK Enduro Cup opener.