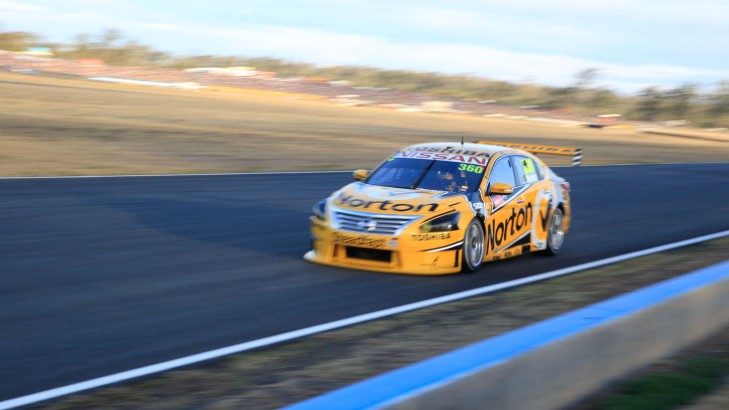 After claiming his first V8 Supercars pole position and racing for the win last weekend, factory Nissan star James Moffat believes the Altimas can be at the front of the pack again at the next Championship event, the August 22-24 Sydney Motorsport Park 400.

Just like Queensland Raceway last weekend, they think the Eastern Creek circuit's combination of fast corners leading on to short straights should aid the four-car Nissan squad, which has had a tough year as it hunts for more horsepower from the Altima's engine.

"Eastern Creek is a track that might suit us based on the style of circuit it is," he told v8supercars.com.au. "But we have to go there and be on our game 100 per cent as soon as we roll out of the truck to keep this momentum going.

"We just have to keep pushing, keep our heads down, keep working as hard as we have been.

Last weekend's performance at the Coates Hire Ipswich 400 showed just how competitive the Nissans can be on the right circuit.

On Saturday Norton Hornet Michael Caruso qualified second for Race 24 and was battling for the lead until a controversial clash with Volvo's Scott McLaughlin led to a drive-through penalty.

On Sunday Moffat claimed his first-ever V8 Supercars Championship pole position for Race 25 and finished fifth in the 200km mini marathon, but only after he ran wide while making a last lap bid for third place.

The Jack Daniel's Altimas also had their moments, with Rick Kelly finishing fifth after a stellar battle with Ford's Mark Winterbottom in Race 24 and Todd qualifying fastest Nissan for Race 23 in 12th spot.

Todd Kelly admitted the team was surprised just how competitive it was at QR after officially playing down its prospects pre-race.

"To be honest it has been a little bit of a surprise, but having said that the engineers have done an incredible job with the cars and the lap that Moff did was 'holy cow, that's insane'.

"I never saw that coming, the guys genuinely did an unbelievable job to be able to pull that off."

Kelly says the Altima lacks the acceleration and straightline speed of their rivals, but handle very well. That means circuits with fast corners on to straights are good for them and circuits where there is a high percentage of corners versus straights work best.

That's why the Altimas ended up working well at QR and why they could star again at SMP.

"Eastern Creek will be interesting because there are a lot more good high-speed corners than there are straights and you come on to the straights with a bit of momentum," Kelly explained.

"The handling of it - when we do a good job of tuning it - is as good as any car out there," he added. "But until we get the acceleration and straight line speed sorted out we are not going to have the consistency that the car really deserves."

The Nissans are expected to receive a small cylinder head upgrade by the time the Pirtek Enduro Cup kicks off with the Wilson Security Sandown 500 in September, but significant development work won't flow through for the VK56DE engine until 2015.

So that means the Altimas should be competitive at SMP and the Gold Coast street circuit, venue for the Gold Coast 600 in late October, but Sandown and the Supercheap Auto Bathurst 1000 are more likely to be struggles.

Moffat said whatever the expectations there was only one way the team could proceed.

"The important thing for us is to understand why the car worked well last weekend and get a good solid understanding of how we tune it going forward so there are a lot more results like that."

James Moffat  ›
15' Nissan Motorsport ›
15' Jack Daniel's Racing ›
2014 Sydney Motorsport Park 400  ›
Stay In The Know
Sign up to the Repco Supercars Championship Newsletter
We use cookies to ensure that we give you the best experience on our website. If you continue to use this site we will assume that you are happy with it.Ok