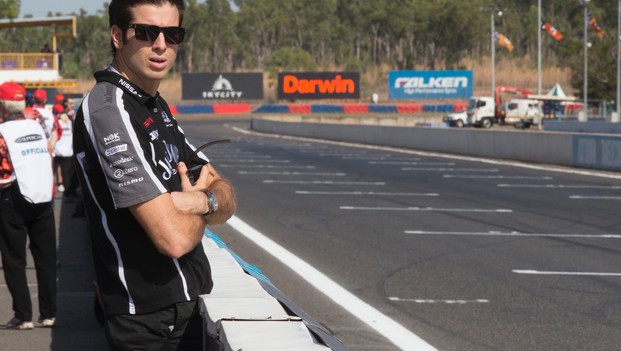 Rick Kelly achieved the best ever resultrecorded in a Nissan Altima on the weekend during the SKYCITY Triple Crown at Hidden Valley Raceway, but whileSaturday meant a great finish in fifth, Sunday was a turn for the worse.

Kelly’s Jack Daniel’s Altima qualified deadlast in Race 18 and struggled for pace during the first of the day’s races.

“We didn’t really change it from yesterday, butwith the soft tyre it just hasn’t worked for us.”

While Saturday’s qualifying and race meant teamswere only allowed to run the hard control Dunlop tyre, Sunday rulings statedteams had to run both soft and hard compound tyres during each race.

Not only was the strategy of bolting on theright tyres at the right time a big consideration, but the way the car ran on both compounds, particularly with a very limited allocation of rubber forthe weekend.

While Kelly’s team chipped away on Sunday, thetight nature of the category meant it was near impossible for the squad toreturn to the front of the pack and back up the previous day's fifth placing.

“It’s hard – people are so competitive thatyou can make gains, but it’s hard for us to pass cars as well,” Pender said ofthe situation in Race 18. He couldn’t pinpoint one issue with the car – itwas slow all over the track.

Pender said they had some ideas for the secondrace – and Kelly ended up finishing 12th, even after starting 25th.

The Pender-Kelly pairing has a strong history– the two worked together in 2006, the year Kelly won his soleChampionship in V8 Supercars, in the days of the HSV Dealer Team. They also scored two second placings at the Darwin circuit in 2007, which Penderdiscussed in his engineer preview for V8Supercars.com.au last week.

Kelly was not available for comment after therun in Race 18, but at the end of the day mused he either had a great run atthe Hidden Valley circuit, or the exact opposite.

“Last year was probably the worst race I’d hadin a long time … but the year before that we got gifted a lot,” the #15 Nissandriver said.

While fifth was an outstanding result for theteam, he admitted they “got lucky” to be in that position when crossing thechequered flag on Saturday.

But despite finishing outside of the top 10 inthe second race, Kelly praised Pender’s work afterwards.

“For the second race, Erik made some changes tothe car and it was beautiful compared to the first race.

“We were able topass a couple of cars, which is fantastic, and if the race was longer we wouldhave kept moving forward.

"It's great tofinish a weekend on a high when we started the day so poorly."

The race was Kelly’s teammate and brother Todd’sturn to battle at the back – he was the last of the finishers, when eightfailed to complete the race, mostly due to the big accident on the first lap.

Rick Kelly  ›
15' Jack Daniel's Racing ›
2013 SKYCITY Triple Crown  ›
Stay In The Know
Sign up to the Virgin Australia Supercars Championship Newsletter
This website uses cookies to improve your user experience. By continuing, you will be providing your consent to our use of cookies.Ok