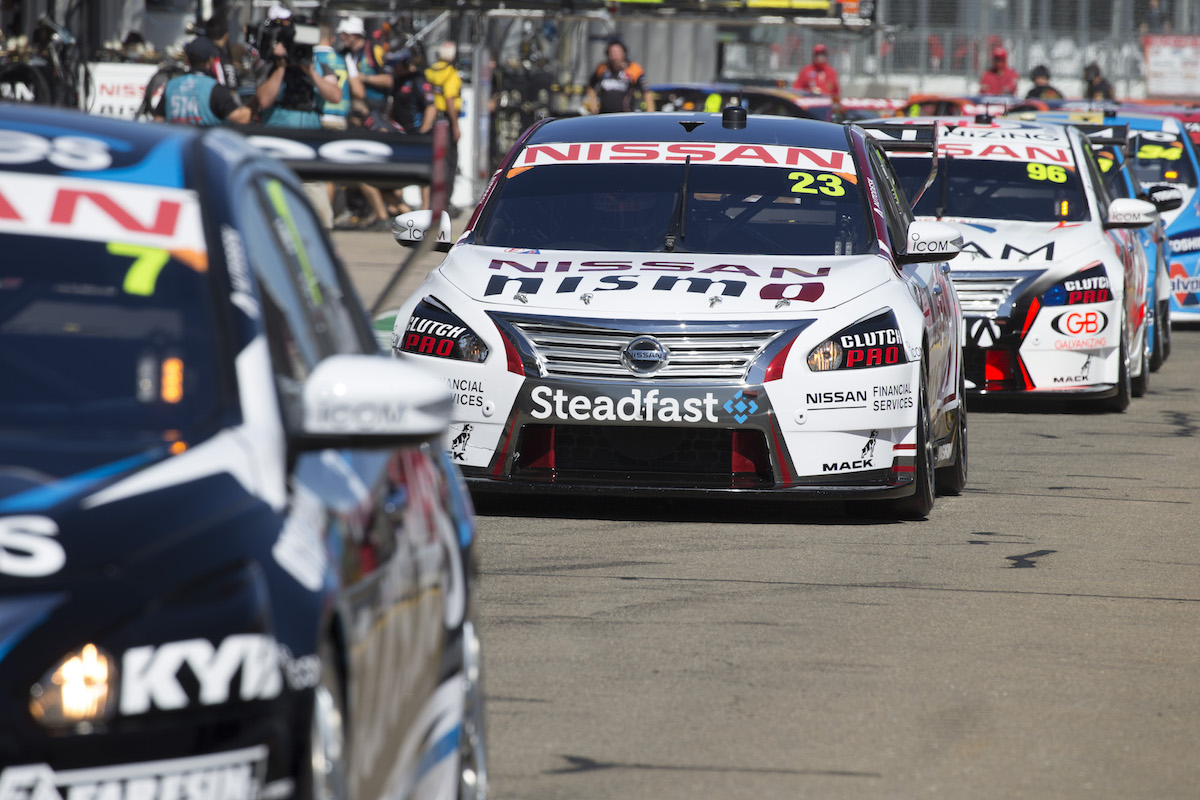 While Nissan’s on-track progress has been underlined clearly at the Clipsal 500 V8 Supercars championship opener, progress towards a decision on the automotive giant’s involvement in the category beyond 2016 remains slow-going.

Michael Caruso leads the drivers’ championship in the Nismo Nissan Altima after scoring a second, a sixth and a 13th across a weekend of intense and sometimes bedlamic racing.

Backing that up, his team-mates and team co-owners Rick and Todd Kelly also were regulars in the top 10 during qualifying and the three races at the Adelaide parklands circuit.

Nissan Australia CEO Richard Emery was on-hand to watch the factory-backed team’s strong performance, but could confirm only that he hoped a sign-off on the company’s continued involvement in local motorsport would come by late April.

Flowing on from that, the decision would be made on the structure of that involvement, in terms of categories that would be supported, which team or teams would get that support and how many Nissans would be backed.

Emery said there was strong support for a continuation of Nissan Australia’s motorsport program both in Australia and Japan, but made it clear that such major investment decisions took time to progress through such a large organisation.

“Companies have a few levels of decision making and Nissan has a few more than I would like,” he said with a smile.

“I’d rather ask the question at the right time when I when have all my ducks in a row.”

Emery made it clear that continuing the V8 Supercars program made the most sense because of its position as Australia’s highest profile motorsport category.

He also made it clear the longer it took to get a thumbs up from Japan the more likely the locally-developed V8 engine in the Altima would continue, rather than swapping to a twin turbo V6 engine as made possible by the introduction of the Gen2 technical regulations in 2017.

“But I am getting the gut feel no-one is going to do much different next year so that is giving me comfort that I don’t have to rush a decision about any sort of change in terms of packaging,” he added.

Meanwhile, Caruso wasn’t getting carried away with his 15-point championship lead over Red Bull’s Jamie Whincup, praising his crew but also making the point that the battle had just begun.

"A lot of effort has gone in over the off season to start the championship in the best way possible, and there’s no better way to finishing the weekend in the lead of the championship,” he said.

“A lot of credit to everyone involved, not just at the track, but also back at the factory for their hard work.

“Now the real hard work begins and we have to maintain these results and keep pushing hard so we can stay at the front of the field."

This is the first year since the Nissan program started in 2013 that the cars have not had their aero package overhauled over the summer break.

The cars are also benefitting from further engine development based on a new cylinder head design introduced late in 2015.

On to the AGP