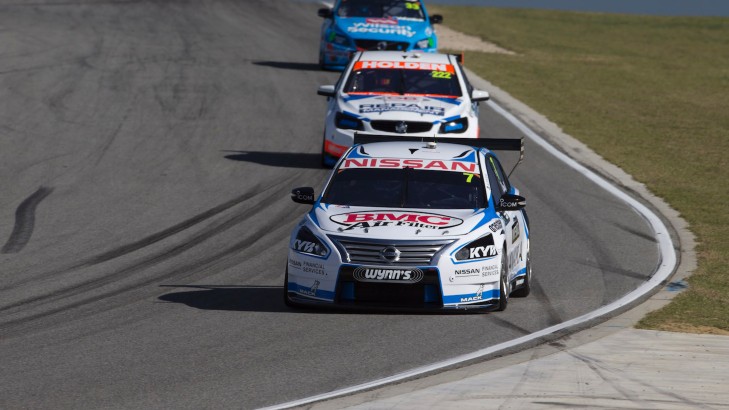 Two years on from its only V8 Supercars race win, Nissan Motorsport's long and costly program to uprate the VK56DE engine is close to crunch time.

If dyno and testing in the Altima goes as well as possible the new-specification powerplant could debut as soon as the Coates Hire Ipswich SuperSprint at Queensland Raceway in late July.

But if there are issues then September 11-13 Wilson Security Sandown 500 is where the engine needs to be available and performing if the four-car squad is to have a decent shot at being competitive in the prestigious Pirtek Enduro Cup co-driver races, which include the Supercheap Auto Bathurst 1000 and the Castrol Gold Coast 600.

"Ipswich would be big (to debut the engine by) but we are really going to struggle if we don't have an improvement by Sandown," confirmed Nissan Motorsport co-owner Todd Kelly.

"If we go to Sandown and Bathurst with where we are at now it's not going to be fun."

The problem for Nissan Motorsport has been the racing engine's modified road car cylinder head.

The size and shape of the port in the head it doesn't give the team's engine development department enough flow to overcome the power and drivability deficit the Nissans have battled against since they debuted in 2013.

The team claimed victory at Winton in 2013 when James Moffat and Michael Caruso scored the controversial 'jungle juice' win. The team returns to the venue this weekend for the NP300 Navara Winton SuperSprint.

The current generation cylinder heads have been machined to the edge of reliability and there is no more development scope available.

Cylinder head blanks supplied earlier this year by a Nissan plant in Mexico have allowed the team to develop a proper racing head.

But Kelly warns that even after 18 months effort, there is a long way to go yet for the project to be successful.

"No-one is blas about the fact it might take a fair bit of work," cautioned Kelly. "It won't be just get the heads, dyno it, homologate it and happy days.

"Manifold testing, camshaft testing, exhaust system testing; everything we have done up until now to get the engine where it is we almost need to go right back to the start to do all that again to optimise the new spec parts.

Kelly explained the testing of the new cylinder head design starts on the dyno, before transferring into the race car. Even then, there is no guarantee the initial findings will translate into better performance on-track.

"The R&D to get it to the point where we get it on track and homologate it - because it's an expensive process - could be two weeks on the dyno or it could be two months," he said.

"When we physically have the parts to test and we go through the testing process the first two runs we do with what we want to try could just hit the spot based off our theories and calculations. Or it could take months of research and development to get what we want out of it and that's still a pretty big unknown.

"Until you get right into that process you just don't know - everything stacks up like it should be a really good gain and get us to where we need to be with it.

"It is hard because a lot of what it reads on the dyno and what it runs on the track isn't always the same thing. How it accelerates off the corner sometimes you can make an improvement in that without it showing up on the dyno."

With just one private test day left for the season, in-car testing of the new engine will pose its own issues. If the timing aligns, the engine could be fired up in anger on-track for the first time at a pre-enduro test.

Or it might debut at a race meeting in one car, before being spread to all four teams. Which driver - Todd or brother Rick Kelly, James Moffat or Michael Caruso - takes on the job of sampling the engine first will be an interesting question to answer in itself.

"The only way you can verify the spec is on a racetrack and considering the investment to multiply that into four cars I don't think we have any choice but to test it in one car before we commit it to four.

"We would hope it would only be one round where the other three cars wouldn't have it."

Kelly's co-driver for the 2015 Pirtek Enduro Cup is still to be confirmed, with the driver hoping to dip into Nissan's pool of international drivers, similarly to last year when he drove with Alex Buncombe.