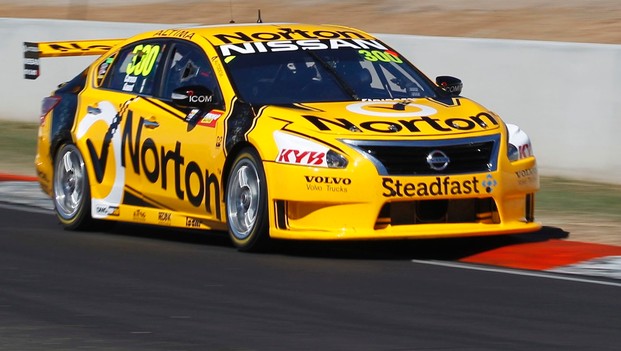 The designer of the radical Nissan Zeod RC experimental electric race car is assessing the aerodynamics of the struggling Altima V8 Supercar.

While much attention has focussed on the performance of the VK56DE V8 engine used in the four Nissan Motorsport Altimas in their debut season in the Championship, there is an emerging belief high speed aerodynamic deficiencies are primarily responsible for the car’s top-end speed problems.

UK-based Bowlby has been asked to examine the Altima and make recommendations and provide guidance to Nissan Motorsport in Melbourne.

“It’s going to be interesting,” Bowlby told motoring.com.au at Fuji Speedway in Japan, where the Zeod RC was making its public debut. “I would love to nudge it in the right direction and chat and talk and help. It’s all part of the family for us. We’ll see what happens.”

Bowlby’s involvement is a further indication of the increasing attention Nissan global headquarters is paying to the Australian V8 Supercars program, which has netted one win this year for James Moffat at Winton with Michael Caruso second.

At the Supercheap Auto Bathurst 1000, the first Nissan home was Moffat and co-driver Taz Douglas in only 18th place in the 29 car field.

A Bathurst-spec VK56DE engine has been shipped to the Yokohama HQ of Nismo, Nissan’s global motorsport and performance vehicle partner, for further development work.

While Bowlby is best known for the Zeod RC and its Deltawing predecessor, he also has extensive sedan experience from his own racing days and designing touring cars when at Lola and NASCARs for Ganassi.

“I have been involved in that shape of car for 30 years in one way or another,” he said. “What I have done within technical teams is help people who have to do the work focus on areas where there is maximum reward.”

He said there were certain key guidelines required for a sedan to gain an optimum aero specification.

“You are looking for balance, drag, downforce and some sensitivity to the aero. That is in a way similar for every car if you want to look at it at a broad level, but there are always detail things that are especially important for certain types of car.”

Nissan has an opportunity to adjust the Altima’s aerodynamics for 2014 because the new Volvo S60 V8 Supercars will undergo aerodynamic parity testing in January.

Bowlby said the coast-down testing regime used by V8 Supercars was appropriate if there was no rolling road wind tunnel available.

“Coast down testing is extremely valuable. I think it is one of the most important ways of evaluating a car’s performance. If you don’t have access to a rolling road wind tunnel you would be crazy to do anything other than a straight line coast down testing.”