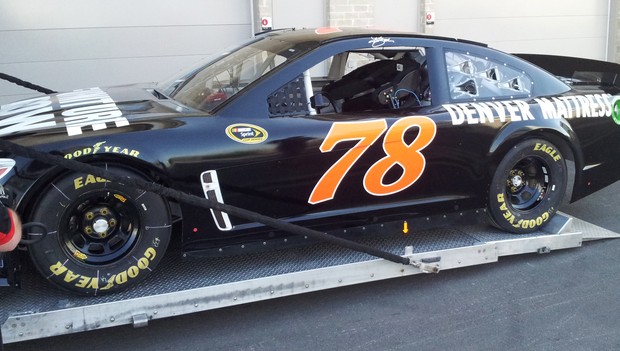 Kurt Busch’s Furniture Row Racing Chevrolet SS NASCAR has arrived at the Circuit of the Americas.

Holden Racing Team’s James Courtney willswap cars with the experienced NASCAR Champion and steer the Chevrolet SS around the circuit ahead of V8 Supercars’ debut at the Austin circuitnext month from May 17-19.

Both have expressed excitement at the‘driver swap’ opportunity, Busch having said driving a V8 Supercar was on histo-do list – click here for comments from Busch.

Courtney has already had the chance to cutlaps in the Car of the Future prototype Holden Commodore in the US over theweekend.

The two are joined by Lockwood Racing’sFabian Coulthard and Australia’smost decorated Supercross rider Chad Reed, who will also test the V8 Supercarat the circuit.

Both V8 Supercar drivers have been on thepodium this season – with only nine races completed so far for 2013– and with Coulthard’s team Brad Jones Racing looking like the ones tobeat, the race in Texas will be ever-important for scoring points in theChampionship race.

V8Supercars will contest four 100km sprints at the stunning Austin racetrack withtwo races on Saturday May 18 and Sunday May 19, preceded by a qualifyingsession each morning.

James Courtney  ›
2013 Austin 400  ›
Stay In The Know
Sign up to the Virgin Australia Supercars Championship Newsletter
We use cookies to ensure that we give you the best experience on our website. If you continue to use this site we will assume that you are happy with it.Ok