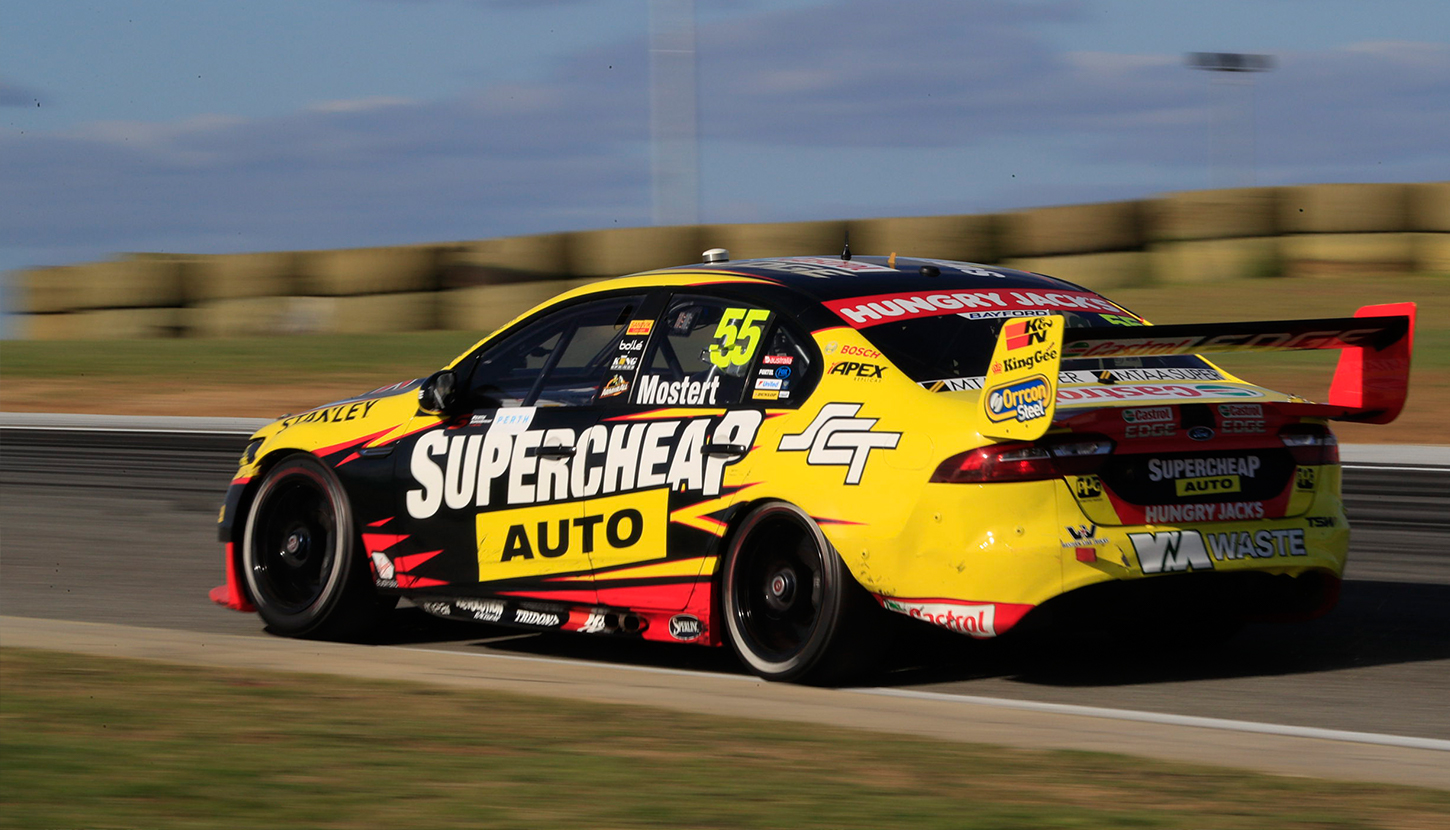 Prodrive Racing Australia will analyse Chaz Mostert’s performance over the weekend in Perth to see if the issues he is experiencing are car or driver related.

The young star – who has returned this season after a shocking, bone-breaking accident at Bathurst last year – says he and the team have some work to do, as he pushes to get back on the podium after just one top three finish in 2016.

Mostert has had no trouble banking ARMOR ALL Pole Positions with two already to his name, but managing the soft Dunlop tyre has been tough – in a season where the softer compound is used at most circuits.

“I think for us definitely know we’ve got one lap speed at the moment which is good, but for me I really struggled to conserve the tyres this weekend,” Mostert told v8supercars.com.

“We’ve got some good data coming out of this weekend so we’ll go back to the workshop and the boys will work out whether it’s more of a driving style type of thing or if it’s more of a car thing.

“The good thing is we had a good solid weekend, a reasonably straight car – 12th and a sixth is not too bad, but when you start from pole you definitely want to go out there and be able to at least secure a podium.”

After starting from P1 on Sunday Mostert ran the alternate strategy to Prodrive stablemate Mark Winterbottom, taking three pit stops, and ended the race 5.1 seconds off the eventual winner, coming home sixth. He led for a time later on but was caught by Craig Lowndes off the start.

“Basically after race one … we really thought with our tyre life the way it was in race one the best option would be to keep throwing tyres at it, so we did have another set there.

“The boys worked out the gaps and stuff like that and we really didn’t finish that far behind Frosty – one and a bit corners. So it’s just one of those things.”

Perth was a strong Prodrive track last year, as was next stop Winton with Mostert earning all three poles and a first and a third, before a mistake leading on Sunday left him last in the longer race.

“We hope every track from now on we have good results, but we’ve definitely got some work to do.

“For me, like I said, it could be driver, could be a bit of car – but we’ve got a bit of focussing to do before next round.”

A handful of teams have tested on the new surface at Winton recently, with Wilson Security GRM, Holden Racing Team, Nissan Motorsport and Team 18 spending a day prior to the test at the grippy circuit.

Prodrive did not elect to test a fortnight ago, but sampled the circuit in February at the pre-season run.

“It would’ve been nice to have tested before then [the round], but it’s just one of those things,” Mostert said.

“Winton has changed and the car handles – since the test day at the start of the year there – a bit different. We’ll just roll out with normal setup and see how we go.”

The 23-year old’s return from injury has been incredible after he broke his leg, wrist and suffered knee issues in the Mount Panorama smash. While he is fine in the race car, he does still walk with a slight limp and required a knee brace across the weekend given the chilly low temperatures in Western Australia.

“The brace is fine, it just keeps the heat in it for me. It’s been pretty cold here in Perth – I didn’t expect it to be this cold. I brought my brace along and just chuck it on to keep the heat in.”

Mostert left Winton eighth in the Championship last year, and leaves the fourth round 12th this season.

But the young gun said after Phillip Island he’s best left to do his thing out of the spotlight.

“Maybe just forget about me because I perform better when I’m under the radar, when I’m not under pressure,” he said.