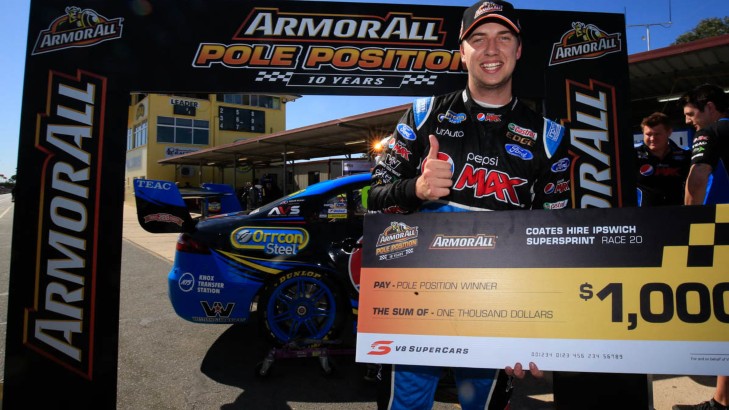 He may be out of action for the rest of the season, but Chaz Mostert is still in-line to win one of the key awards for 2015.

Blistering single lap pace has meant Mostert notched up 10 ARMOR ALL Pole Positions before his Bathurst accident, earning his career first pole in Perth and taking four straight from Barbagallo to Winton.

While the 23-year old had hoped to head to Phillip Island this weekend to support his team, Mostert will remain in Queensland with family.

He said his recovery was going well though, and was thrilled to have a shot at the Pole Award, while his Prodrive team battles for the teams championship and the drivers championship via Mark Winterbottom.

"My recovery is coming along well," Mostert said.

"It's only really been in the last week I've been cleared to start a more intensive program as we had to wait for the knee to recover and heal after the additional surgery I had.

"It was always going to slow the first part of my recovery but will make things much easier once I am mobile. It does mean I won't make it to Phillip Island but I have become the master of the Foxtel remote and speak to the team daily so I am getting a little bit of a fix still."

Volvo's Scott McLaughlin and Red Bull's Jamie Whincup - who both scored 10 pole positions last year, funnily enough - are the only two men who could topple Mostert. But either would need to earn every pole position from here to do it. While Craig Lowndes also has four pole positions, in the case of a tie the award is decided on count back, and he has not earned enough second place starts to beat Mostert.

"Our car speed has been incredible this year across the whole team and that shows with Frosty and Dave [Reynolds] 1-2 in the points," Mostert said.

"I was obviously having a great run up until my crash so while it is a bit of a surprise to be in contention, the FG X has been amazing to drive so it is a credit to everyone at Prodrive Racing."

While the Pole Award would be a great personal achievement, for Mostert, seeing the team take the top honour is what would ease the pain of this season.

"If the team can win one or both of the championships this year then it will certainly make what happened to me a little easier to swallow.

"Winning the Pole Award [would be] nice, it shows we've been the fastest over one lap all year which I believe we were. But now I am on the sidelines as a super fan I just want the team to win their title and also the driver title. That is what we all do this for."

While he feels it would be a tough ask for 'Frosty' to stitch up the title this weekend at Phillip Island, Mostert has faith his teammate will bounce back.

"Mathematically it would be pretty hard to win in this weekend but Frosty can certainly go a long way to making it very hard for someone else to win which should be his goal.

"Our car will be strong there, it has a lot of characteristics which suit it and he's won there before so I have every confidence he'll have a strong weekend after a couple of tough ones recently."

For Mostert, next year's Clipsal 500 is the targeted return to the seat. While there is no official test day confirmed to kick off the season, there is every chance Prodrive will put Mostert in his V8 Supercar before the first point-scoring round.

"Clipsal is obviously the main goal as that is when the points start getting handed out," he said.

"Given there is no group pre-season test I've got a few more weeks which will be handy.

"The team will test before the season kicks off so that will be my chance to shake the cobwebs out before we go racing.

"My rehab will accelerate rapidly by year's end so as it stands we are on schedule to go racing from race one."

It was announced yesterdaythat Mostert will run in new colours next year, with Supercheap Auto coming on-board to sponsor the #6 Prodrive Ford Falcon FG X. 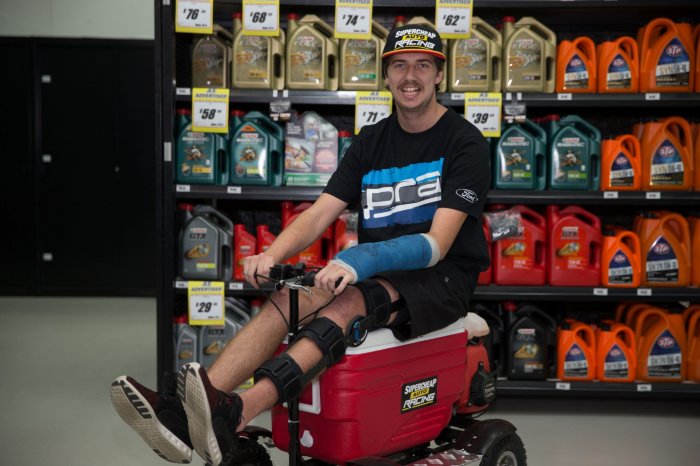 Chaz Mostert  ›
15' Pepsi Max Crew ›
Stay In The Know
Sign up to the Virgin Australia Supercars Championship Newsletter
We use cookies to ensure that we give you the best experience on our website. If you continue to use this site we will assume that you are happy with it.Ok