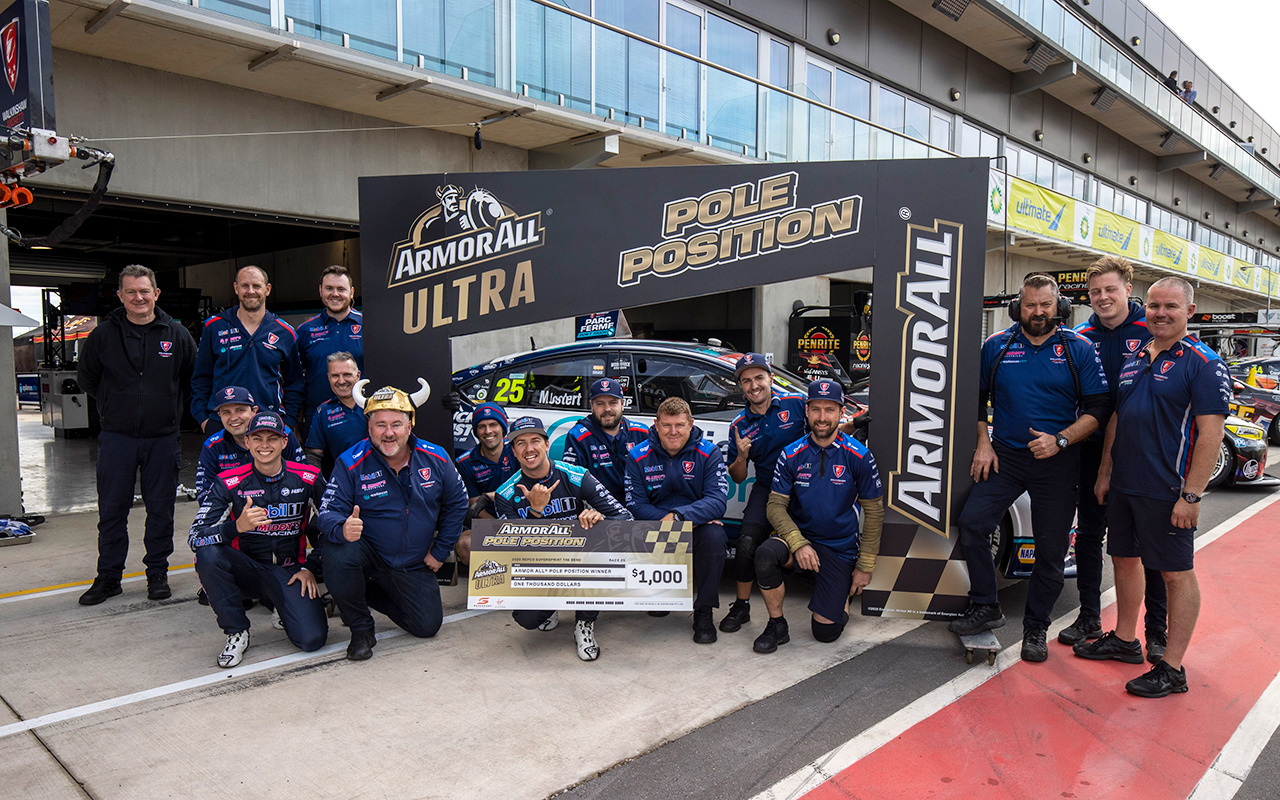 Chaz Mostert took a surprise ARMOR ALL Pole in the Top 15 Shootout ahead of the opening race at the Repco The Bend SuperSprint.

All three parts of qualifying were held in dry conditions, with the downpour that hit during Practice 2 having cleared.

The Walkinshaw Andretti United Commodore was the fifth car out in the Shootout, having been just 11th in Q2.

Mostert recorded a 1:47.9688s to eclipse previous fast-man Anton De Pasquale, who had been the first runner in the Penrite Racing entry.

One at a time Mostert’s rivals failed to better his benchmark, with Scott McLaughlin – the 13th out on track – coming closest, 0.0057s adrift.

It marks the Walkinshaw team’s first pole since 2016, when it ran as the Holden Racing Team.

Red Bull HRT teammates Shane van Gisbergen and Jamie Whincup will share the second-row of the grid for the 24-lap race.

Van Gisbergen topped Q2 – jumping from last to P1 with the chequered flag flying in that session – but couldn’t do anything about Mostert when it mattered.

“It was so close with Scotty there,” said Mostert, who is the fourth different polesitter in the last four races.

“I don’t think I have ever seen a margin so close – it looked like he had us but then it was good to just see him just fall in behind.

“I’m super stoked for the team here at WAU, we’ve been trying for this and it’s just good to reward the team and all of our sponsors for sticking with us in this tough year.

“I thought Shane was going to come out and smoke us at the end there but maybe we were a bit lucky to go earlier in the Top 15 Shootout than the other guys.

“We’ll take it any way we can get it. It’s just great to reward the guys and get a front-row start and hopefully we can get off the line and have a good crack.”

Fabian Coulthard was second in Q2 but dropped to fifth in the Shootout, losing valuable time locking an inside-front tyre into Turn 6, while De Pasquale improved from 15th to sixth.

Jack Le Brocq and Rick Kelly also made ground in the Shootout to be seventh and eighth, while Lee Holdsworth, Andre Heimgartner and Cameron Waters made it seven Fords in the top 11.

David Reynolds, Bryce Fullwood, James Courtney and Nick Percat will start 12th through 15th, with Percat throwing his lap away at the last corner.

“I just touched the white line on turn-in and it’s still wet,” he lamented. “Young kids at home, stay off the white lines when it’s been raining.

“Who would have thought? Racing driver 101. Seriously, I’m angry with myself.”

The previous ARMOR ALL Pole winner, Todd Hazelwood, who took a maiden career pole in Townsville, failed to even make the Shootout at The Bend.

He ended up 16th in Q2, with his best sectors across two laps indicating he had the potential to make it, but didn’t put the lap together.

Team 18 also had a bit to digest after Q2, where its drivers Scott Pye and Mark Winterbottom were just 17th and 19th, split by Matt Stone Racing’s Garry Jacobson.

Team Sydney’s Alex Davison was slowest in Q2, while Jack Smith, Macauley Jones, Chris Pither and Zane Goddard were eliminated in Q1 and will start 21st through 24th.