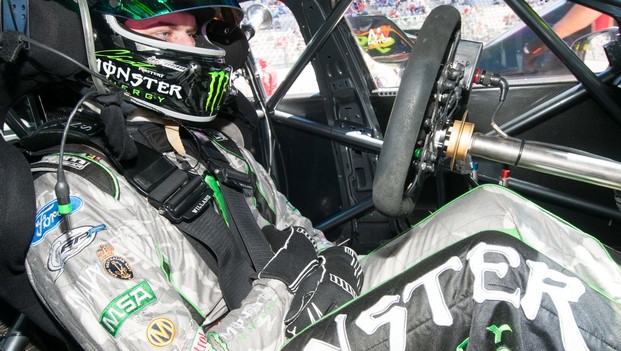 Fresh from hisfirst test with Dick Johnson Racing, Chaz Mostert was excited to have spent theday in his new Ford Falcon.

The 21-yearold driver was announced in the #12 seat late last week and hasn’t wasted anytime getting behind the wheel.

“I had a goodcrack today,” he said, estimating he had completed between 50 and 60 laps.

“I’ve finishedon a massive high after being on the black stuff all day – it’s been positiveand I’m quite comfy in the car.

“I had a fairbit of time in the car today, just to get all the nooks and crannies outcomfort-wise, but it was a pretty productive test day… I feel like I’ve got myeye in.”

The week hasbeen a whirlwind for the young driver who has jumped up into the main game after competing at the Clipsal 500 in the Dunlop series and is 'on loan', so to speak, from Ford Performance Racing.

“It’s been a pretty quick transition... But DJR isalmost like an exact mirror image of FPR – the guys are passionate andnice.”

Earlier today, FPR’sMark Winterbottom got in the car and completed 10 laps to get a feel for thecar and help mentor Mostert.

“Frosty did acar evaluation to see what it feels like in the car and helped me out a littlebit driver-wise,” Mostert said.

“It was goodto have someone at his experience level – he’s a frontrunner in theChampionship, so it’s wicked to have him on my side.”

To hearWinterbottom say the car felt close to his and was competitive, gave Mostert areal boost of confidence ahead of Perth.

As the teamsdon’t race or test at Morgan Park – DJR only used the facility todaybecause regular test circuit Queensland Raceway wasn’t available – Mostert thought it was tricky not having any previous data to run against.

Heading to theChill Perth 360 for his first Championship event from May 3-5, Mostert feelsthe biggest challenge will be the long races on such a hard, coarse track.

“Today on thetest day I didn’t have too many long runs, it was just to get me comfortable inthe car,” he said. “But in Perth they are long races… in the Dunlop series theywere short sprint races, so I think that will be the hardest thing to learn.”

See Mostert inaction at his first event – details on the Chill Perth 360 here.

Chaz Mostert  ›
2013 Chill Perth 360  ›
Stay In The Know
Sign up to the Virgin Australia Supercars Championship Newsletter
We use cookies to ensure that we give you the best experience on our website. If you continue to use this site we will assume that you are happy with it.Ok