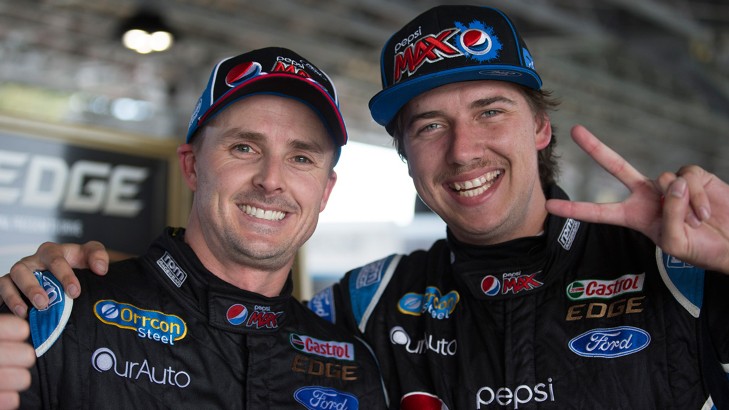 Prodrive Racing (Australia) has confirmed reports this morning that Chaz Mostert will remain with the team until at least the end of 2017, locking the young star in with the team for a further two years.

It was revealed earlier this year that Mostert - who debuted in the V8 Supercars Championship in 2013 with Dick Johnson Racing, though he was on-loan from PRA - could have been one of the big movers for next season.

But the team has recently decided to exercise that option, bringing his contract in-line with teammate Mark Winterbottom, also set to stay until at least the end of 2017.

"We had an option on Chaz for a further two years and while there was no rush to sort things out, there wasn't any reason to delay either, so we exercised our option a while ago and we can continue on without any further speculation," Edwards said.

"Chaz has been a breath of fresh air for the team and the sport. He is one of the next generation of stars and he keeps performing at a very high level so we're very pleased with his development thus far.

"He and Mark (Winterbottom) will be driving together for at least the next three seasons so our fans and commercial partners have got a lot to look forward to."

Mostert is looking forward to continuing with the team that gave him his opportunity.

"Prodrive Racing has taken up its option on me so I will be racing here for at least a further two years but our joint focus remains on success this year and more immediately on Winton this weekend," Mostert said.

"This is a great team. I get along great with the crew, we've enjoyed a lot of success in a short time and I am enjoying challenging and being challenged by Frosty (Winterbottom)."

The 23-year old scored his first Championship ARMOR ALL Pole Positions over the weekend in Perth and has earned three podium finishes this season, placing him eighth in the Championship.

While Mostert showed impressive pace last weekend at the UBET Perth SuperSprint, he came home fourth after qualifying on pole after his team's risky strategy, starting on and recycling soft Dunlop tyres.

He told v8supercars.com.au he is aiming for the top five this season and wasn't yet concerned about his Championship position.

"You know what it's like when you come out of Bathurst, come out of Gold Coast - there's a long way to go. [These are the] first races; we'll keep doing our thing, it's good being in eighth and we'll see what happens."

The team announced yesterday it would pair Mostert with rising star Cameron Waters for this year's Pirtek Enduro Cup - Waters is another young gun the team is grooming for the future, supporting him in the V8 Supercars Dunlop Series.