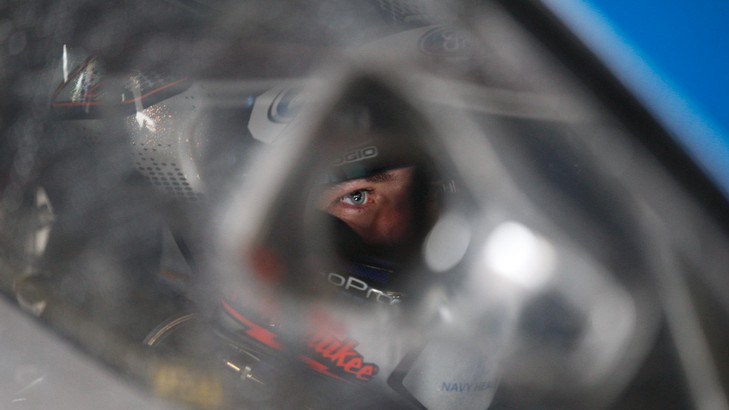 Already having earned a race win in V8 Supercars, it’s easy to forget Chaz Mostert will be contesting his first ever main game Clipsal 500 next week.

Having won the 2012 and ’13 rounds in the Dunlop Series, short races in the previous incarnation of a V8 Supercar means he won’t be as familiar as his more established competitors.

While Mostert said a strong result at the opener would be fantastic, his first priority is leaving the concrete-lined circuit with a straight car.

“The start of the season at Clipsal is one of the hardest – mentally and physically – tracks on our calendar, so to try and get through there clean with a good bank of points is the only goal I’m thinking about,” Mostert told v8supercars.com.au.

It doesn't hurt that Saturday’s distances are more aligned with his Dunlop Series experience, either. Last year, the development category ran 20-lap and 23-lap races – Mostert was second in the first, and won the final.

“I think it will help me out – a couple of shorter races suits me a little bit better, just to get the hang of the track,” Mostert said.

“A lot of these guys have been racing a couple of main game series, now they head to Clipsal and it’s all there in the back of their mind, whereas for me it’s still a little bit cloudy, exactly what I have to do there.

“I think the short races will be a benefit for me and they make more action packed racing too, (in) shorter races no one really runs off in the distance as much and it’s going to be pretty cool.

“The schedule’s going to be cool now for TV as well – we get a twilight race, so hopefully of the people watching TV around Australia there will be more watching V8 Supercars.”

While rival team principal Roland Dane has suggested Mostert will not perform as former FPR pilot Will Davison did, the young gun has nothing but confidence heading into the 2014 season.

Ford Performance Racing has been a long-time supporter of Mostert, so there is no unfamiliarity with his surroundings. In fact, he described the switch back from Dick Johnson Racing, where he was 'on loan' last year, as coming home.

He continues on with race engineer Adam De Borre, who is now in the FPR garage after also being loaned to DJR as part of the two teams’ technical alliance.

“We’re kind of progressing together, we both know what we kind of like and what we want out of the car,” Mostert said.

“It’s a bit of a step up when you take a step to a new team you haven’t raced in the main game with … (but) just feels like you’re back at home, to be honest. Come straight back into work and everything’s gelling. It’s a great bunch of guys at FPR, they are hard working and dedicated to what they do – racing, and racing hard.”

Similarly, Walkinshaw Racing’s Nick Percat lines up for the first time in the V8 Supercars Championship at the Clipsal 500, after having competed in the Dunlop Series in 2012 and Carrera Cup in 2013 at the circuit.

While Dale Wood and Jack Perkins return to top tier racing, both contested the main game Clipsal 500 in 2009.

Valvoline Racing GRM’s Robert Dahlgren is the only V8 Supercars driver to have never steered the Adelaide Parklands track in any form of race car.

Beginning next Thursday February 27, tickets are available for the Clipsal 500 now. The event boasts an impressive on and off-track line-up with a range of support categories, concerts by night and the first ever twilight race hosted by the circuit.