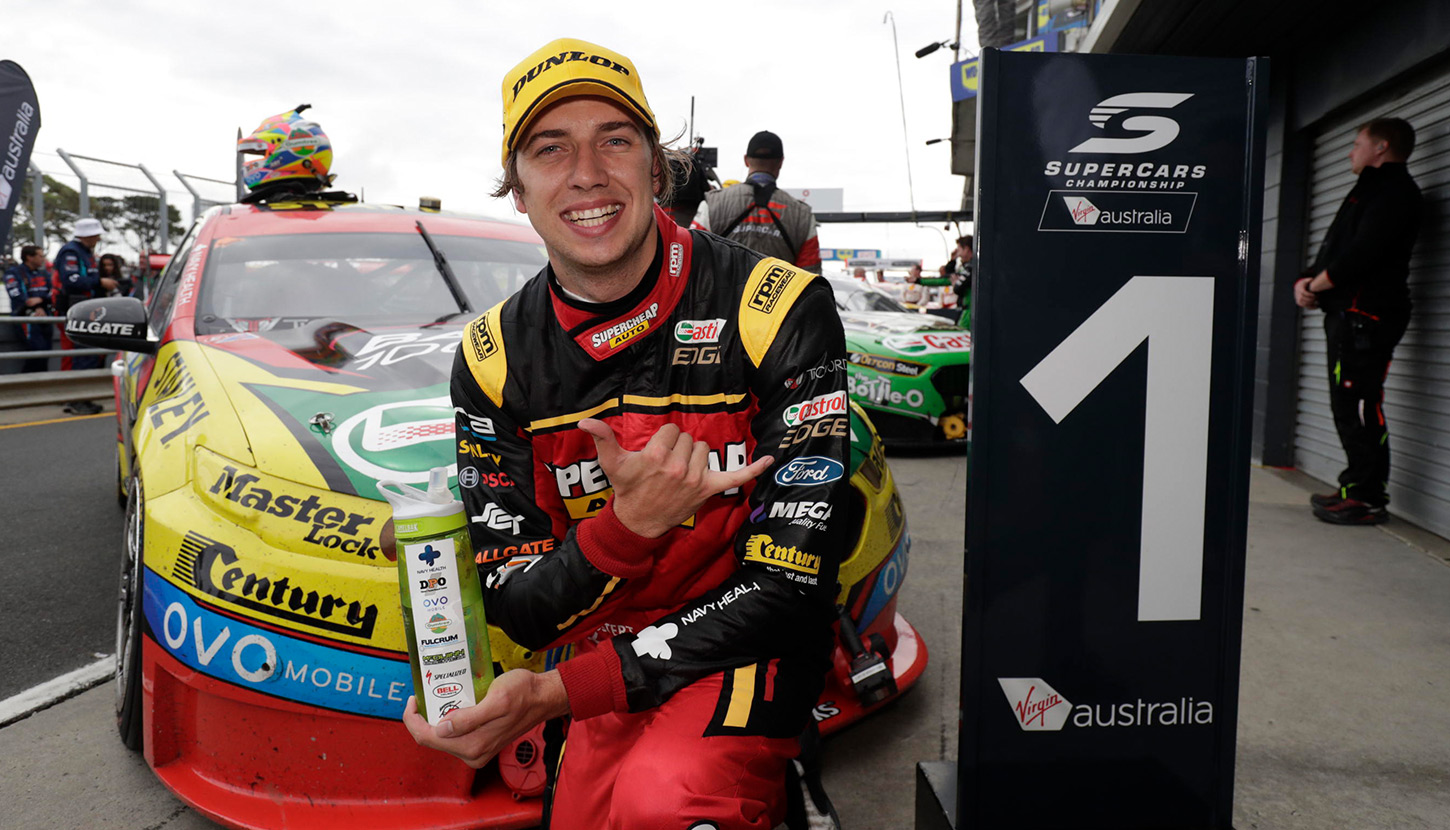 Chaz Mostert led Prodrive to a one-two finish at the WD-40 Phillip Island 500 after their major rivals struck trouble in Race 6 of the season.

In a reverse of yesterday’s opening 250km leg, it was smooth sailing for Prodrive as the three Triple Eight Holdens were struck down by tyre failures.

That allowed Mostert to take his first championship race win since August, 2015, ahead of team-mate Mark Winterbottom and Erebus Holden driver David Reynolds.

Coulthard’s championship lead over Van Gisbergen has been cut to seven points as a result, with Mostert leaping to third – just 37 shy of the top spot.

“It’s been long enough,” beamed Mostert, who won a non-championship race at Albert Park in March.

“It’s a credit to all the guys who after blowing two right-rears yesterday turned the car upside down. The whole win is on those guys.

“It means a lot to win straight away after making a couple of mistakes in Tassie.”

For the second day in succession the opening lap saw chaos at Turn 2, this time thanks a three-wide squeeze involving Nick Percat, Will Davison and Jason Bright.

That left McLaughlin to head Coulthard, Whincup, Mostert and Winterbottom through a relatively quiet period before tyre failures began to strike.

Taz Douglas was the first to suffer before Michael Caruso, van Gisbergen and then Whincup had right-rear failures, causing a second Safety Car to clear the debris on lap 24.

The bulk of the field used the opportunity to complete their second stops, with Mostert and Winterbottom among those able to take on enough fuel to satisfy the minimum 140 litre fuel drop and make it to the end without an extra stop.

Others including Triple Eight drivers Craig Lowndes, Whincup and van Gisbergen pitted multiple times under the yellow in order to reach the 140 litre minimum, ensuring they’d restart at the back of the pack.

Coulthard meanwhile fared even worse, earning a drive-through penalty for rejoining from his pitstop against the red light at pit exit.

The out-of-sequence McLaughlin did not pit under the second yellow and therefore continued to lead from the restart until he made his final stop on lap 42, from which he rejoined 23rd.

Mostert subsequently took over the front-running and led Winterbottom to the flag, with the two Prodrive Ford drivers nursing their tyres through a nerve-wracking final 28 lap stint.

Lowndes sat fourth when he suffered his failure just six laps from home, putting a final nail in a horror day for Triple Eight.

Van Gisbergen finished as the lead Triple Eight car in 16th ahead of Whincup (18th) and Lowndes (23rd).

A tense debrief is also expected at Nissan after Caruso and team boss Todd Kelly traded paint as they battled for ninth in the closing laps.

Rick Kelly made it through both of his team-mates during the battle, with Caruso ending up 10th and Todd Kelly dropping to 11th.