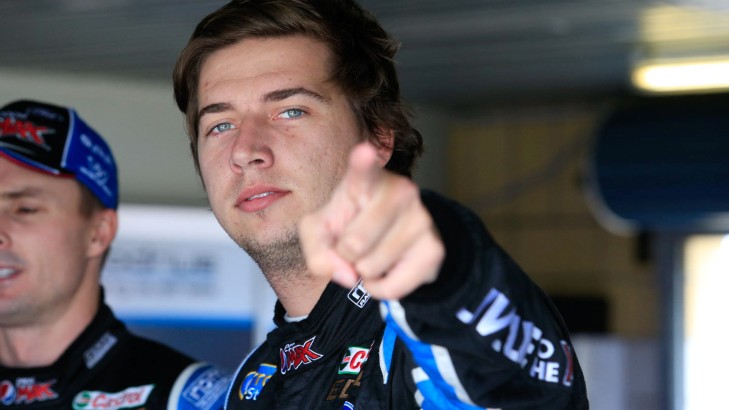 Chaz Mostert will join Inside Supercars tonight, discussing the many highs and lows of his 2015 V8 Supercar Championship campaign to date.

The 23-year-old Bathurst Champion scored second place in the 200km haul at Symmons Plains, repeating his success from the 2015 Australian Grand Prix where he took the chequered flag in second across all four races and in race one at the Clipsal 500.

However, the 2015 season hasn't been all smooth sailing for the Queenslander, succumbing to Adelaide's infamous turn eight in race two at Clipsal, while he speared into the wall on the last lap of Sunday's race at the season opener after his controversial contact with Jamie Whincup.

The panel will quiz the rising star on his up-and-down season to date, while Holden Racing Team's James Courtney will be on hand to give his side of the story about his face-to-face confrontation with Will Davison in Tasmania.

Erebus Motorsport V8's Ash Walsh will talk through his step-up to the V8 Supercars Championship after graduating from the V8 Supercars Dunlop Series this year, while Greg Rust catches up with David Wall at the Wall family workshop.

The Inside Supercars team willdebate international events, the number of events and the allocation of championship points, with Riana Crehan assessing the social media activity from the week - join in on the conversation throughout the show by using the hashtag #InsideSupercars.

Catch Inside Supercars tonight on FOX SPORTS 506 at 7.30pm AEST for all of the insight and opinion from the world of V8 Supercars.

2015 Tyrepower Tasmania SuperSprint  ›
Stay In The Know
Sign up to the Virgin Australia Supercars Championship Newsletter
We use cookies to ensure that we give you the best experience on our website. If you continue to use this site we will assume that you are happy with it.Ok