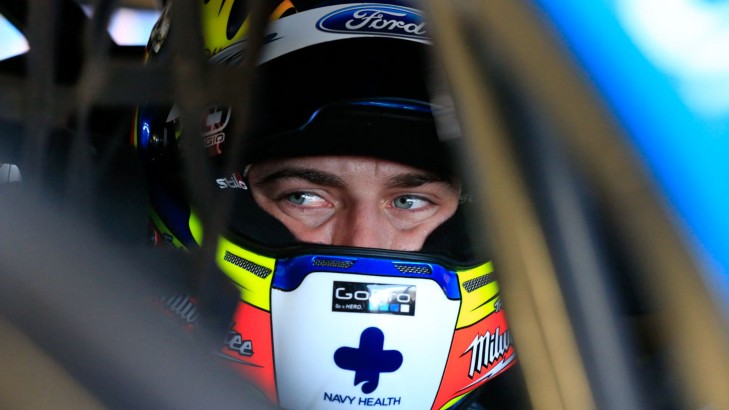 He qualified on the second row, then the first, and the final race of the weekend at Queensland Raceway was his for the taking.

After joining the category for the fourth round in Perth last year, Chaz Mostert managed his first V8 Supercars win in just five events in Ipswich, bringing Dick Johnson Racing back into the winner's circle for the first time since James Courtney's Championship win in 2010.

While the young gun -who was leased to DJR from FPR -was expected to do great things, the early win surprised many and cemented him as one to watch.

Now 22-year old Mostert is excited to return to the track and having recorded one win already this season in Perth, and receiving praise from team boss Tim Edwards on his performance at challenging Townsville when he managed to hold off Craig Lowndes on Saturday, there's no reason why he can't earn more valuable points and push for his goal of finishing top five in this year's Championship.

"Now we go to Queensland Raceway where we had a win last year, and it's the home crowd for me as well so it's going to be fantastic," Mostert said.

After the Sunday 'double points' race at Townsville, the #6 Pepsi Max Crew racer was concerned he had fallen out of the top 10 in the standings, having finished seventh . But he's just there in 10th, trailing stablemate David Reynolds by one solitary point, and ahead of 11thplaced Jason Bright by 88.

"Weprobably didn't get as many points as we wanted to this weekend to try and hunt down that top five," Mostert said.

"There's still a long way to go, we have enduros and heaps of stuff to go, so you just never know where you'll end up. But still, the main goal is to get into that top five.

"If we can't do that, staying in the top 10 is definitely where I want to be for my first full year in the Championship."

It seemed Mostert took some time to find his feet in the new team, with the pressures of a factory drive, involved in some early incidents in 2014, but after landing on the podium in the 200km dash in New Zealand, his performances have been solid and impressive.

Townsville was challenging for both he and teammate Mark Winterbottom, neither of them scoring what has become an expected podium result. Hovever, Mostert was encouraged by the improvements the team made over the weekend, and the ability to minimise the damage a bad round can have on a drivers' standings.

"It was a pretty tough weekend for us, to be honest.

"We rolled out not quite as strong as we wanted to, but we really turned it around, which not many teams can do, so it's a big credit to our guys of the Pepsi Max Crew and all the boys involved with FPR.

"They did an awesome job to turn a weekend that looked like a horror to a big bank of points."

Ford Performance Racing is yet to confirmed whether it will test prior to the Coates Hire Ipswich 400.

Winterbottom continues to lead the Championship after the Townsville event, with a 96-point margin over Jamie Whincup.

Chaz Mostert  ›
15' Pepsi Max Crew ›
2014 Coates Hire Ipswich 400  ›
Stay In The Know
Sign up to the Virgin Australia Supercars Championship Newsletter
We use cookies to ensure that we give you the best experience on our website. If you continue to use this site we will assume that you are happy with it.Ok