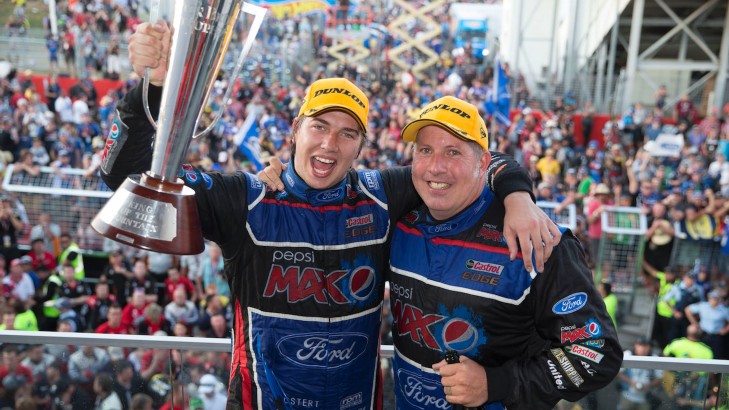 He's on a hot streak when it comes to qualifying a V8 Supercar, but defending Supercheap Auto Bathurst 1000 champion Chaz Mostert has never set an official qualifying time for the Great Race, let alone participated in the ARMOR ALL Top 10 Shootout.

And there's no doubt the Prodrive Racing Australia Pepsi Max Ford Falcon FG X driver is keen to correct that this October.

Mostert crashed his Dick Johnson Racing Falcon FG in practice for his first 1000 in 2013 and the car could not be repaired in time for qualifying, so he started from 28th and second last position on the grid. He and co-driver Dale Wood finished 21st.

Last year he set the 14th fastest time in his Pepsi Max FG but was booted to the back of the grid for passing under a red flag in qualifying.

Famously, he and co-driver Paul Morris raced through from 26th on the grid to win an incident-packed race, passing Jamie Whincup's coughing Red Bull Holden Commodore VF II on the last lap.

This year Mostert, who runs second in the championship behind team-mate Mark Winterbottom, goes to Bathurst with 10 ARMOR ALL pole positions already under his belt this year and on-track to pass Whincup's all-time record of 13 poles in one season.

And he has form at Bathurst, qualifying on pole for the 2012 Dunlop Series event with a sizzling time.

It is not being at all sensational to suggest Mostert could go from qualifying zero to qualifying hero at Bathurst this year; from setting no time to being the pole position holder.

"That would be cool if that happened," Mostert told v8supercars.com.au.

"Obviously, as far as starting positons go I have had a bit of bad luck the first couple of years at Bathurst - mainly driver related stuff.

"So not the real successful qualifying rate there, but not a bad finish rate from last year's point of view!

"It's crazy how those stats come up, but I have only started the Bathurst 1000 twice, so only very early days - at least I hope so anyway."

Mostert remembers watching the Top 10 Shootout on television as a young kart and open-wheeler racer, as well as live when he camped at the race as a 12-year old.

"I would love to do it," he says of taking part in the ARMOR ALL Top 10 Shootout.

"There are so many dreams that V8 Supercars drivers have and to have the mountain all to yourself for one lap trying to see how quick you can push that car with the whole world watching - and everyone in Australia and on the mountain watching you - would be a pretty amazing thing.

Mostert makes the trek to Bathurst this year with a new co-driver in Dunlop Seriespoints leader Cam Waters who hasemerged in 2015 as a true superstar of the category, having claimed five wins so far this season.

So whirlwind has the experience been that Mostertadmits he hasn't really had the time to come to terms with that epic 2014 victory and enjoy it.

"It's been really hard in the period from last year to this year to accept that I have won the race," he admitted. "But as we are getting closer and closer to the event I am going 'wow okay we did win last year'.

"But now I am going 'I might lose the crown this year'. It's one of those things that is helping sink it in as the race getting closer and closer.

"It's a weird thing, I wish I'd kind of embraced it over the year a little more, but in saying that there is the job you've got to do at all these other tracks as well."

Mostert says one thing that he learned from last year's win in 1000 that truly sunk in is to never write yourself off as a chance for a result.

"Always try your hardest and anything can happen. You just have to be there. In the last 40-20 laps you have to be up there in the top five with a fast car and a straight car.

"The rest of the day doesn't sound like it means that much, but in every part of the day something can go wrong. As a driver you can make a mistake, you can come into a pit stop and something jams in the car. Many things can really hurt you.

"But the beauty of Bathurst is if it happens early in the day you can redeem yourself."

Tune in to Inside Supercars tonight for more from the 2014 Supercheap Auto Bathurst 1000 winner at 7.30pm on FOX SPORTS 506, and post any questions for Mostert later this morning as he joins v8supercars.com.au for a live chat.