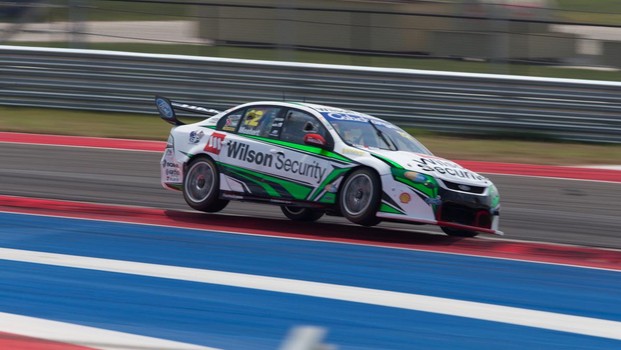 Mostert, whoimpressed on debut at the Chill Perth 360 last month in his #12 Ford Falcon, raninside the top 20 at the last event in Austin, Texas, despite the challenge ofcontesting a circuit teams had no data for.

The 21-yearold is looking ahead to achieving his goal of finishing 2013 in the top 20 inChampionship points. He has already overtaken one current driver, ErebusMotorsport’s Maro Engel, to sit 27th after just seven races.

“Starting latein the Championship, it’s hard to see where to set a goal,” Mostert said. “ButI think if you can stay inside the top 20 as a young driver, you prove yourselfand that you belong in the series while you’re still learning and getting youryears of experience.”

Mostert foundthe challenge of Austin “different” to what he faced on debut  – and is expecting this weekend’s SKYCITYTriple Crown to be another story altogether.

However,Mostert has the advantage of having contested Hidden Valley Raceway in anothercategory, while two others in the field – Engel and Scott McLaughlin – havenever been to the Top End circuit.

“To have that– to have been to the track and competed in a category – it’s a lot betterthan (going to) a place like Austin where I’d never been.

“(Almost)Everybody else has been in a Supercar there and I haven’t, so it’s a littlechallenge to push myself hard, be fast in Practice and get on top ofeverything.”

The weekend’smixed tyre strategy will pose a challenge for teams – FPR’s MarkWinterbottom said he felt the category was short a set of tyres in Darwin– and Mostert knows it is something that will need to be planned well.

“My engineerAdam (De Borre) has been around quite a few years more than I have in the maingame – every call he runs past me, and everything we’ve gone through sofar is the way I’d do it. He thinks in the most common sense way, I love theway he thinks and makes decisions.”

Teams can onlyrun hard tyres on Saturday – with a qualifying session, ARMOR ALL Top 10Shootout and the 60/60 Super Sprint race split into two halves – while onSunday teams need to use both hard and soft tyres during the two races.

“It’sdefinitely going to make us try and get right on top of the set up with tyrelife, the way the whole weekend revolves around it will make it interesting.I’m looking forward to Darwin.”

Mostert hasquickly learned how important qualifying is in V8 Supercars.

“It means alot more than what it would in my DVS days,” he said. “It’s 28 guys reallyclose together, one tenth of a second off is back six to 10 positions – it’shurts a lot.

“So I have totry and get the most out of my self and the car during qualifying.”

The SKYCITYTriple Crown at Hidden Valley Raceway begins on Friday June 14, with ticketsavailable through Ticketek.

Chaz Mostert  ›
2013 SKYCITY Triple Crown  ›
Stay In The Know
Sign up to the Virgin Australia Supercars Championship Newsletter
We use cookies to ensure that we give you the best experience on our website. If you continue to use this site we will assume that you are happy with it.Ok