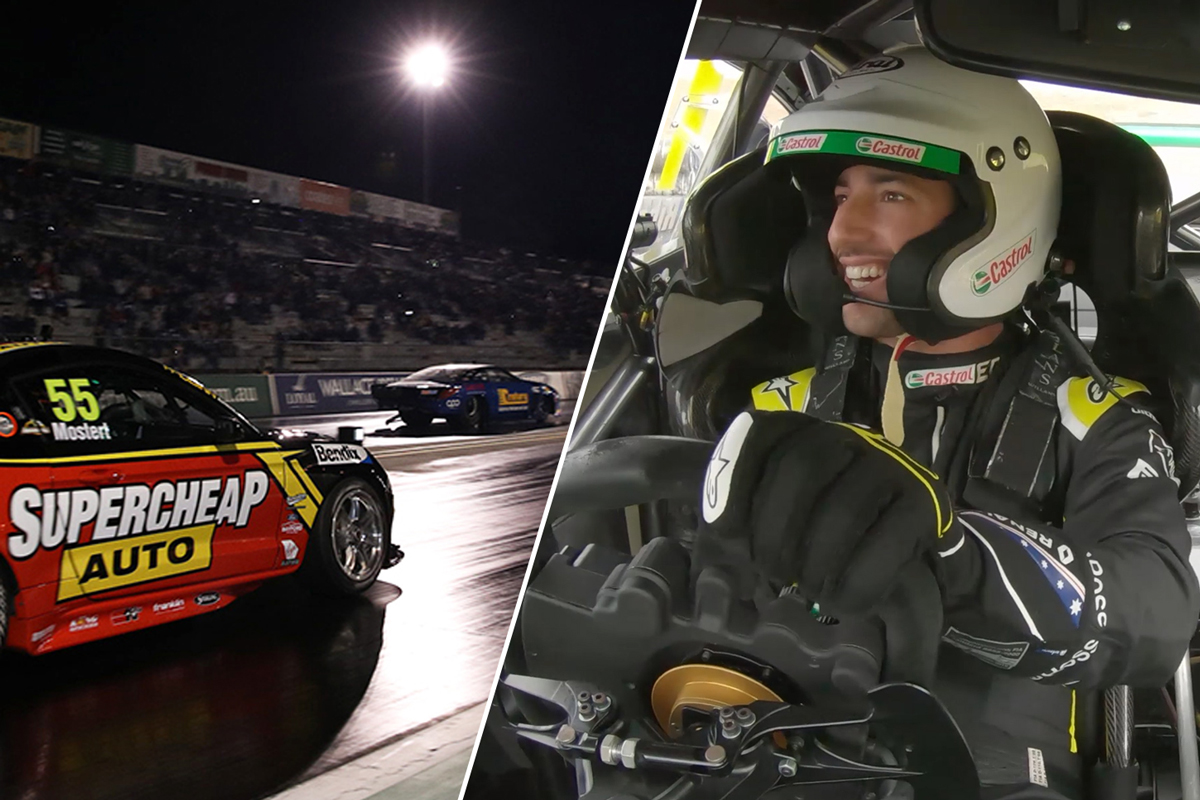 From a Formula 1 star in a Supercar to a unique drag racing challenge, these were the videos that had you clicking on Supercars.com this year.

10) Mostert crashes out of Top 10 Shootout

It was a troubled October for Chaz Mostert.

After tangling with teammate Cameron Waters at Bathurst, the Tickford star’s Vodafone Gold Coast 600 ended early thanks to a heavy crash in the Saturday Shootout.

In the lead-up to the Australian Formula 1 Grand Prix, Kelly Racing had something special in store for Renault’s Daniel Ricciardo.

Thanks to a common sponsor in Castrol, the Aussie hero sampled Rick Kelly’s Nissan at Calder, subsequently declaring an ambition to race in the Bathurst 1000.

8) Chaos breaks out in pitlane under Safety Car

The flashpoint of Adelaide’s season opener happened not on the track, but the pitlane, amid a flurry of stops under Safety Car in the Sunday race.

Chaz Mostert was released into the path of Rick Kelly, with contact turning the Supercheap Ford sideways, much to the shock of the packed grandstands.

Jamie Whincup’s decision to illegally pass the Safety Car in the Sunday race at Pukekohe earned a drive-through penalty, taking the former leader out of contention.

Following the race, Whincup did not hold back, slamming the actions of CAMS officials with comments that drew a ‘please explain’ from the governing body.

After appearing in camouflage colours for testing in late 2018, Ford took the wraps off its Mustang Supercar proper in early February.

5) Coulthard penalised for holding back field

It was the big talking point of the Supercheap Auto Bathurst 1000; Fabian Coulthard holding back the field under Safety Car as a critical round of pitstops unfolded.

The drama didn’t stop at the chequered flag, with the team subsequently found guilty of breaching Obligation of Fairness regulations, slapped with the biggest fine in Supercars history.

Bathurst wouldn’t be Bathurst without some pre-race drama and it didn’t take long for the Mountain to bite in 2019.

Luke Youlden suffered a heavy hit at Reid Park in Thursday practice, putting the 2017 winners – who’d come so close to a repeat in ’18 – on the back foot.

It was hardly a fair fight – Chaz Mostert’s Supercar against a purpose-built drag car – but it sure grabbed some attention at the Winternationals.

Mostert faced off against Ben Bray’s Toyota in a series of runs at the Willowbank venue, arranged by common sponsor Century Batteries.

Rookie Macauley Jones suffered a series of unfortunate impacts in 2019 and, while it was far from the biggest, his Bathurst practice mistake had a spectacular consequence.

The angle of the hit between the Commodore’s right-rear corner and the concrete in The Cutting lifted the roof of the CoolDrive entry, adding to the day one drama on the Mountain.

No surprises here; Scott McLaughlin’s 43G impact with the Surfers Paradise concrete was the most watched video on Supercars.com in 2019.

The Shell Ford driver escaped sore but uninjured from the crash, which destroyed his Bathurst-winning Mustang and delayed securing the championship until Sandown.

27/12/2019
Stay In The Know
Sign up to the Virgin Australia Supercars Championship Newsletter
We use cookies to ensure that we give you the best experience on our website. If you continue to use this site we will assume that you are happy with it.Ok