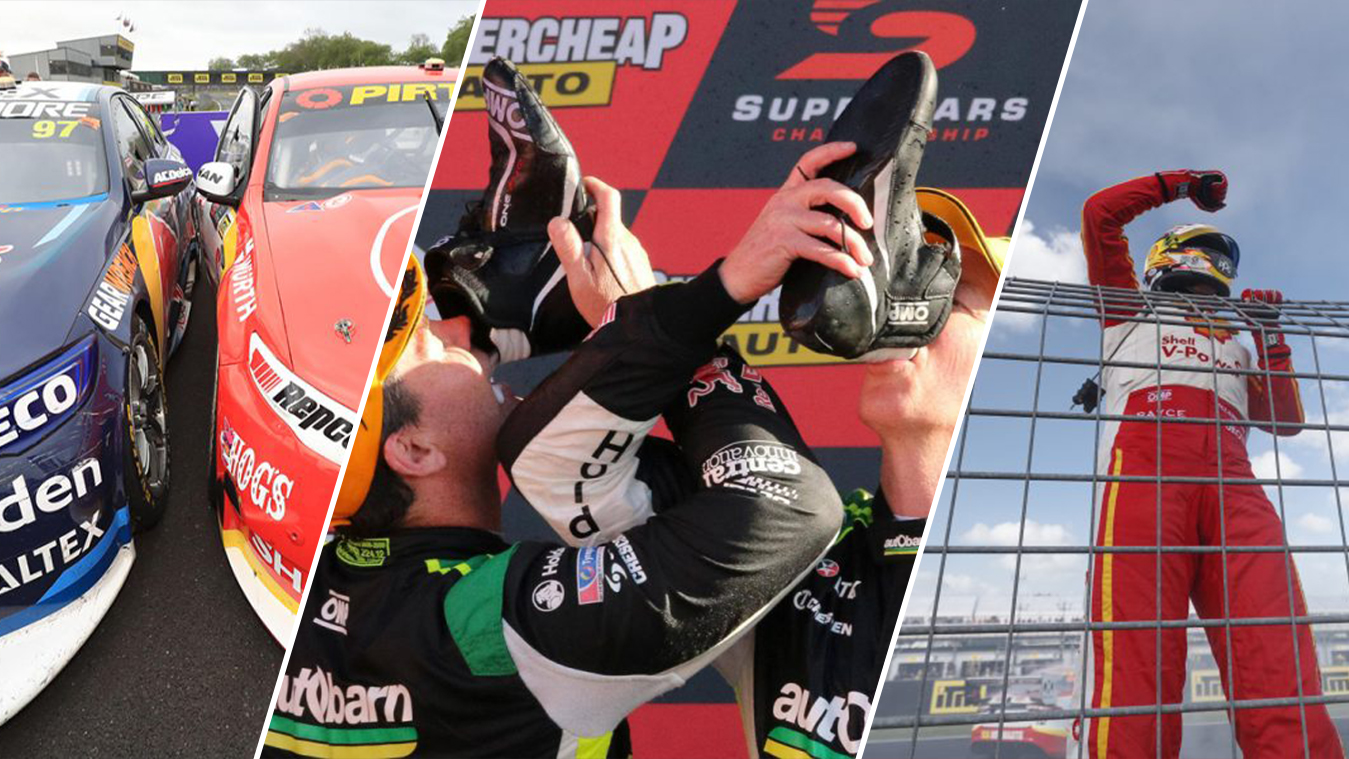 Supercars race winners let it all hang out in 2018.

As Supercars.com concludes its look back through the year that was, we highlight the five best post-race celebrations of the season. 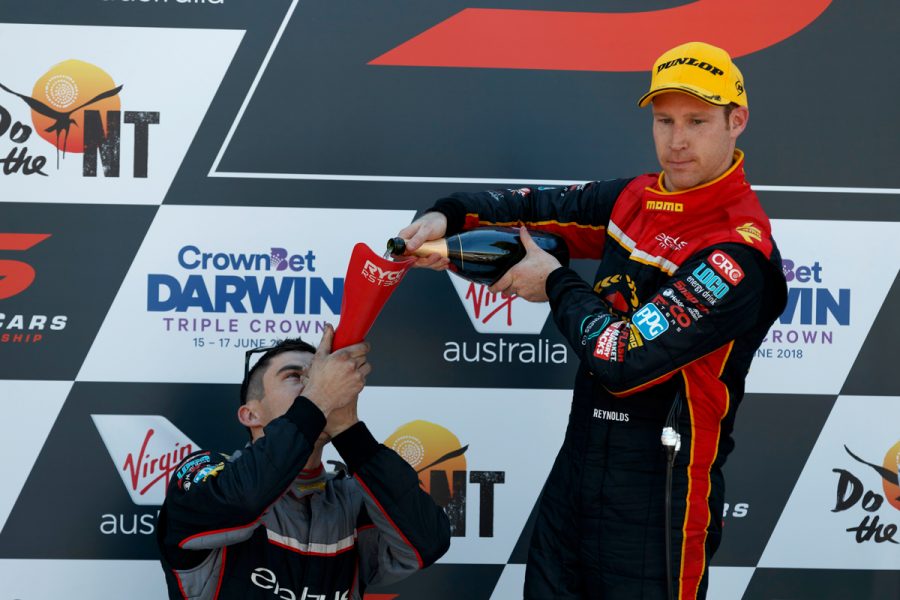 At the same place he introduced Supercars to the ‘shoey’ three years earlier, David Reynolds was at it again after winning on Sunday at Hidden Valley.

The noted class clown and mechanic Brad Tremain planned ahead in 2018, bringing a funnel from team sponsor Ryco to the podium to complement the regular shoey.

“Once we get to the really tall podiums, we’re going to make a contraption that’s going to revolutionise piss drinking,” Reynolds later joked.

It followed a move from Formula 1 to take out a trademark on the shoey, which had been adopted by Daniel Ricciardo following Reynolds’ 2015 antics. 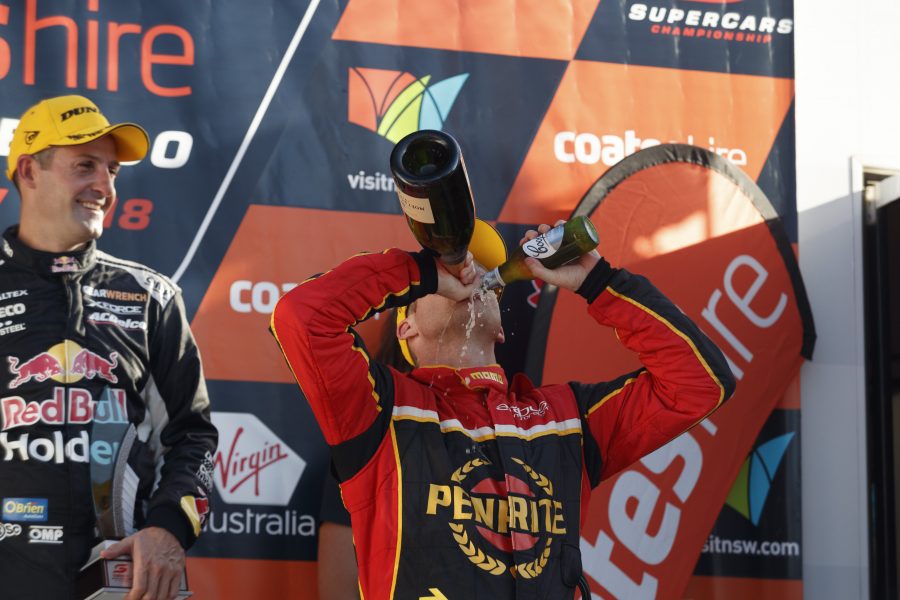 Reynolds' other two 2018 wins also came with notable post-race moments, including adding a BYO beer to the provided bubbly at the Newcastle finale.

At Albert Park in March he dropped a champagne bottle from the podium, which smashed in the pitlane, triggering a ban of the practice that later caught out Jamie Whincup at The Bend. 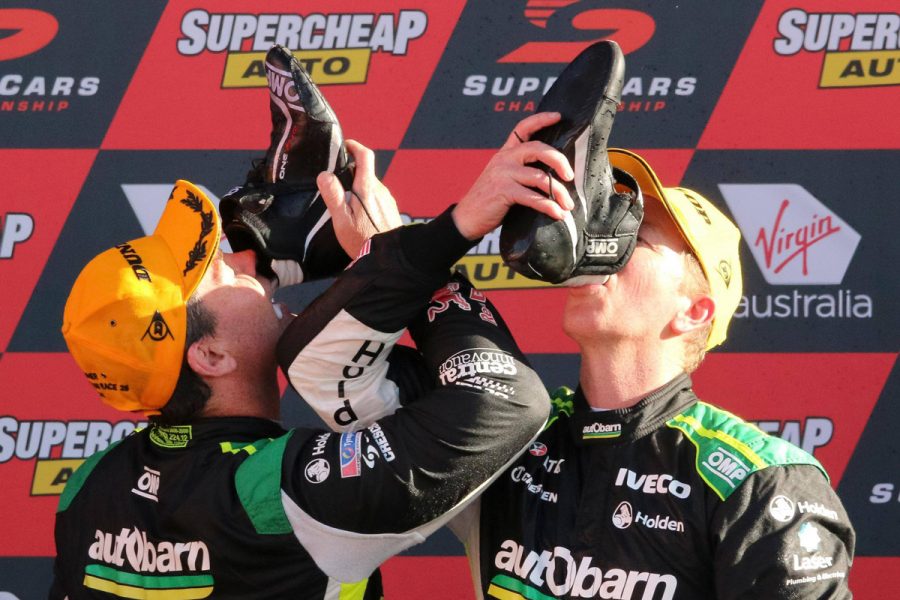 Not to be outdone, Craig Lowndes and co-driver Steven Richards stepped the shoey game up a notch at Bathurst, performing a rare double-shoey on the podium.

It followed a daring ‘superman’ act from Richards on the pitlane wall at race end, leaning over the circuit as Lowndes came by after taking the flag. 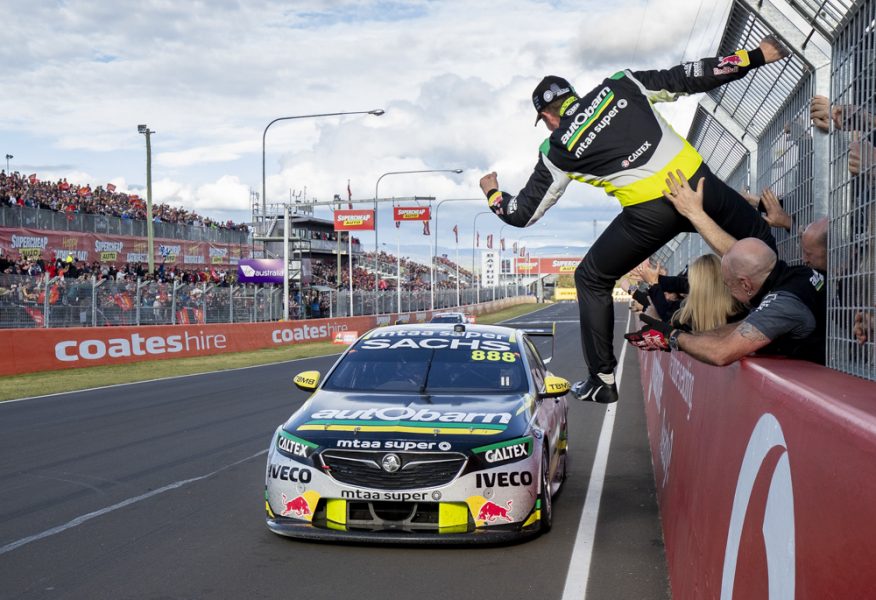 “I was just trying to celebrate with Lowndesy,” Richards later told the Fox Motorsport podcast of his pit wall antics.

“It’s one of the best moments in world motorsport, not just Australian motorsport.

“I don’t think too much about it, I did it probably to a lesser degree in 2015, but I was just excited.” 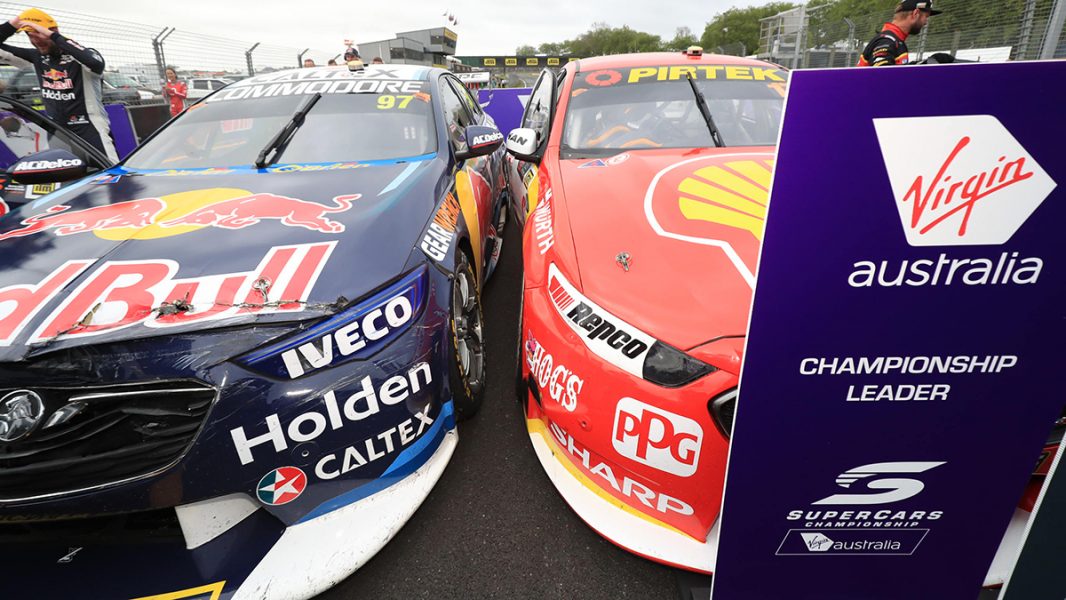 Van Gisbergen again gave us some of his legendary burnouts in 2018 – including during his mid-season purple patch at Queensland Raceway, Townsville and Sydney Motorsport Park.

But whether he meant it or not, the Pukekohe parc ferme ‘park-in’ with title rival McLaughlin proved the most talked about post-race move of the year.

It had plenty fired up, with commentators quick to label it deliberate, fans up in arms, and McLaughlin determined to get his revenge on the Sunday.

Through it all though, van Gisbergen protested his innocence, later musing that “the shit parking mistake turned out to be a big shit fight, more than I thought". 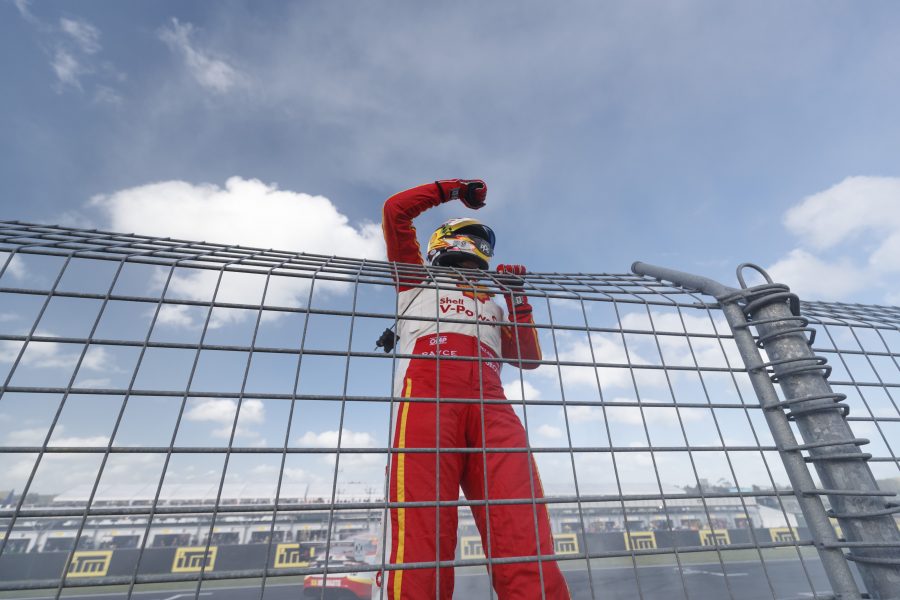 The ‘Spiderman’ fence climb was made famous by Team Penske IndyCar star Helio Castroneves in the early 2000s.

When Scott McLaughlin took a decisive, and hugely popular, win on home soil in the Sunday race at Pukekohe, the 25-year-old wasted no time in sharing it with his fans.

Up on the fence!

"It was just so cool, to see the fans up on the fence," he said afterwards.

"I was so close to them, you could see all their faces. They were pumped. It's something that I'll never forget.

"I've been meaning to do that for like... whenever I've won, I just wanted to pick a good time.”

Craig Lowndes’ final full-time drive in Newcastle didn’t produce the results he was after, with 23rd and 11th place finishes far from a true representation of his season.

Regardless, the 44-year-old made sure he won the post-race burnout contest, well and truly up-staging new champion McLaughlin. 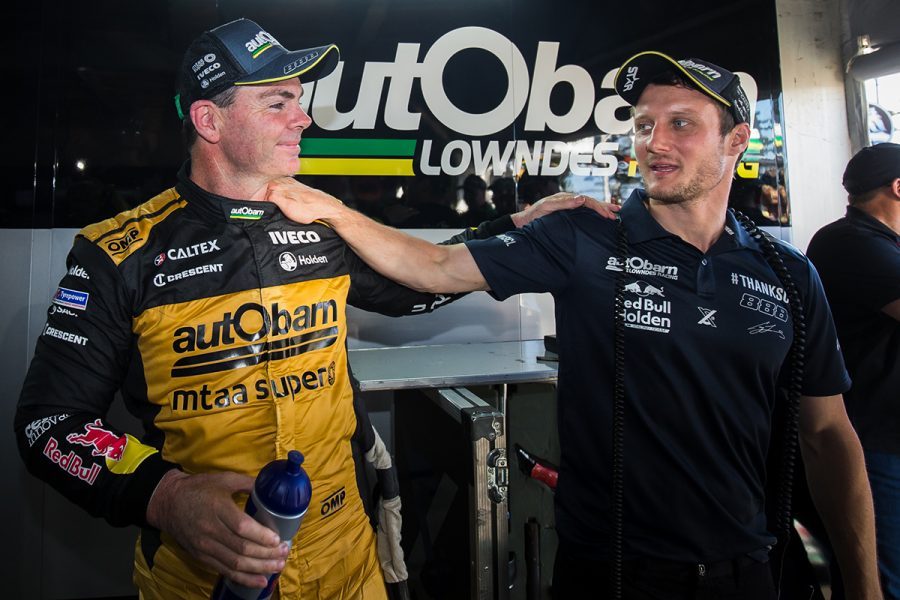 “All I wanted to do was do a bigger one than Scotty,” beamed Lowndes of his burnout post-race.

“But I made sure the engine was alright. I think it got to about 105 degrees, I was in third gear, so I was making sure I didn’t blow it up!”

While this list is dedicated to the heat-of-the-moment victory celebrations, McLaughlin’s Sunday night antics in Newcastle should not go unmentioned.

The new champion made headlines on the Monday when, during a media call, he casually dropped in a piece of trivia about the trophy.

“I certainly had a couple of sherbets here and there and the trophy was filled up with beer, spirits and Chicken McNuggets,” he said.

“You can actually fit 40 McNuggets in the trophy which is quite interesting, that is a fun fact for everyone.”

The comment was backed up by a cheeky Instagram video from McLaughlin, putting a light-hearted full-stop on an unforgettable season.

What was your favourite celebration of the season? Cast your vote in the poll below:

Steven Richards  ›
Stay In The Know
Sign up to the Virgin Australia Supercars Championship Newsletter
We use cookies to ensure that we give you the best experience on our website. If you continue to use this site we will assume that you are happy with it.Ok