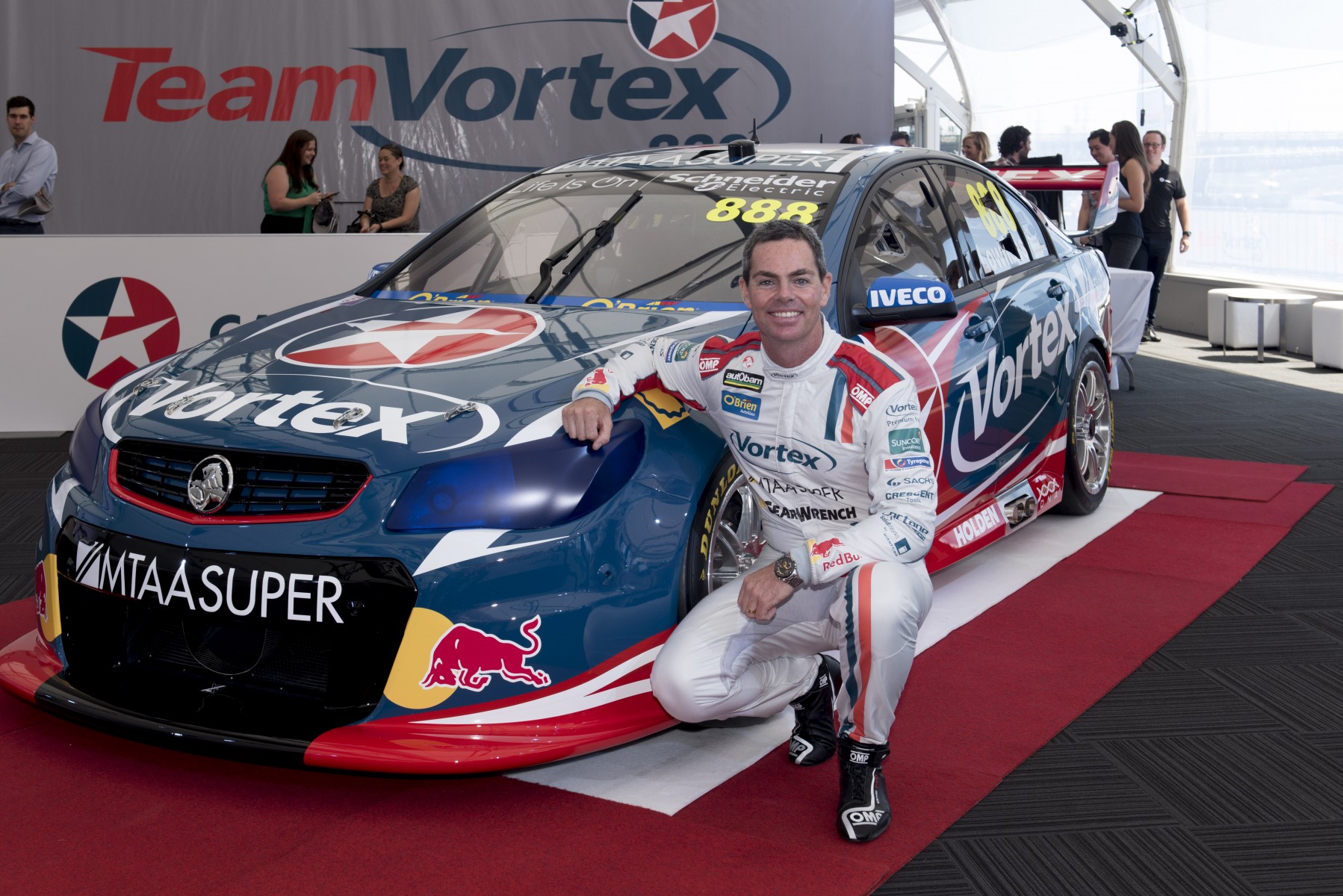 Lining up in the team’s third car for 2016 – which was unveiled in Sydney yesterday – Lowndes has over 100 wins in a V8 Supercar and at the season opening Clipsal 500 will break the record for the most starts in the category.

At 41 years of age, he’s one of the oldest drivers in the field yet still one of the most successful, finishing runner-up to Mark Winterbottom last season and winning the Supercheap Auto Bathurst 1000 with Steven Richards.

“Last year he was second for the sixth time in the 11 years he was racing with us, and he won plenty of races,” Dane said.

“He’ll be running at the front of the field snagging more wins and trying to keep just ahead of Jamie all the time in the token number of race wins.”

Triple Eight teammate Jamie Whincup is right behind Lowndes in race win statistics with 97 victories, but is in a different garage this year, sharing with new recruit Shane van Gisbergen, while Lowndes’ TeamVortex entry pairs with TEKNO Autosports and Will Davison in the pit lane.

But even though Lowndes is running as a third car – which some feel can be looked upon as the third priority – Dane insists there will be no preference given to the two Red Bulls. He has tasked the team’s technical mastermind Ludo Lacroix with engineering Lowndes, with every expectation the #888 will continue to perform well.

“They’ll all be given equal opportunity to produce the best result,” Dane said of the three drivers, despite the structure.

“Normally the reason the third car is seen in the light you suggest is because it’s not funded properly – this one is properly funded and as such is the equal of the other two.

“TeamVortex has everything that the Red Bull Racing Australia cars have got and that team has got, so I think that’s the starting point of it for most operations.

“The money isn’t always there to get the same job [with a third car] … but here that’s not the case.”

Lowndes is pleased to work with Lacroix this season and is as determined as ever to succeed, with another Supercheap Auto Bathurst 1000 win his ultimate goal.

“Ludo’s obviously been part of the team for such a long time and has been an active engineer at times – I think that it’s great,” Lowndes said of the pairing.

“He’s worked very closely and still works very closely with [engineer David] Cauchi last year so for me it’s great to work alongside a guy who also works outside the square. I think for me it’s a great opportunity.”

French engineer Lacroix ran Whincup for his first two years with Triple Eight, was instrumental in turning around Whincup’s season in 2014 and engineering the headline grabbing XBOX wildcard at Bathurst in 2013.

“Ludo wants to keep developing the team and for me that’s exciting. I love the development side of it, thinking outside the square. Hopefully in the past we’ve shown, 90 per cent of the time when we’ve come up with a new component or part for the car it’s strong, faster and better … that’s where Ludo comes into his own. He’s very clever thinking about that.

“You can’t dismiss how fast the XBOX car was at Bathurst a couple of years ago – Ludo engineered that, and it was bloody quick so we all wanted to dip into his brain for that one, that’s for sure.”

While there’s a new major sponsor on-board to please, Lowndes says there’s no more pressure than usual this year.

“I think the pressure on myself is from myself,” he said.

“It really doesn’t come from sponsors, it never has … for me my expectations are to win races, there’s no doubt about that.

“We’re here to win races, we want to win a championship … of course we didn’t have a great time in Homebush here in Sydney last year, we didn’t quite get across the line, but we gave it a red hot go. And of course this year it’s no different.

“Bathurst is always my ultimate victory, we won that with Steve last year and looking forward to getting to the mountain later in the season to try and get another one.

“But it all starts at Clipsal in about a month’s time and that for me is the ultimate – start the season off on a positive note, get that momentum going and look forward to the rest of the year.”

While Lowndes admitted his preparation has been affected by a broken collarbone sustained over summer, he’s certain he will be fit for the season opener, running from March 3-6.