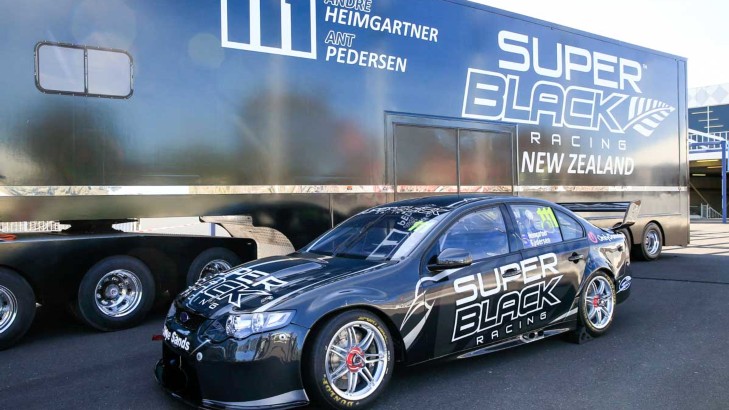 This year has seen the Kiwi contingent record stellar results in the V8 Supercars Championship.

Between Scott McLaughlin, Fabian Coulthard and Shane van Gisbergen in 2014 there have been six Championship wins, 11 ARMOR ALL Pole Positions and one particular jandal comment that continues to live on.

Pairing with Ant Pedersen in the all-Kiwi Super Black Racing Falcon, he will debut in a V8 Supercar at the Supercheap Auto Bathurst 1000 in the wild card entry.

Both drivers were part of the team's official launch and will test the Ford Performance Racing-prepared Falcon, which was on display at Sandown last weekend.

Proud to be part of the all-Kiwi squad, Heimgartner recognised the popularity and success of the current Kiwi drivers in the V8 Supercars Championship and how McLaughlin in particular has proven a particular path can lead to a main game drive.

"He's got a lot of following and last year he did really well," Heimgartner said of McLaughlin in particular, who experienced a huge boost in social media following and profile after his 'give it some jandal' podium speech in February, when debuting the new-for-2014 Volvo S60 V8 Supercar at the Clipsal 500.

"I've done a similar thing to what he has done, running (New Zealand category) SuperTourers and the Dunlop Series and he seemed to go real well when he jumped into V8 Supercars so we'll see what happens.

"If I can follow in his footsteps - obviously, he's set the bar pretty high for young guys coming in - but we'll have to see what happens."

While Heimgartner will make his V8 Supercars Championship debut in the Super Black Racing entry, he has driven a Dunlop Series car around Mount Panorama, finishing 17th and 12th in last year's 12-lap races.

One of the elements that will make the challenge more palatable is contesting the event in the FPR-prepared Falcon.

"Obviously it's encouraging to have last year's Bathurst winners running our car," he said.

"Saying that, a lot of it is in the driver so me and Ant will have to do our bit, but it is good to know we're going to have a good car."

Pedersen believes having last year's Bathurst winning team preparing the car puts them in a good position for a result.

"It's never easy in this game, but for us, we race in the New Zealand SuperTourer series and I've won races against Shane, Scott and Greg (Murphy), so it puts it in perspective," Pedersen said.

"If you give yourself the right opportunity with the right resources and a good team around you, you can have a crack at it."

Super Black Racing will test at Winton Raceway on Wednesday, ahead of Bathurst, which is the next event on the V8 Supercars calendar.