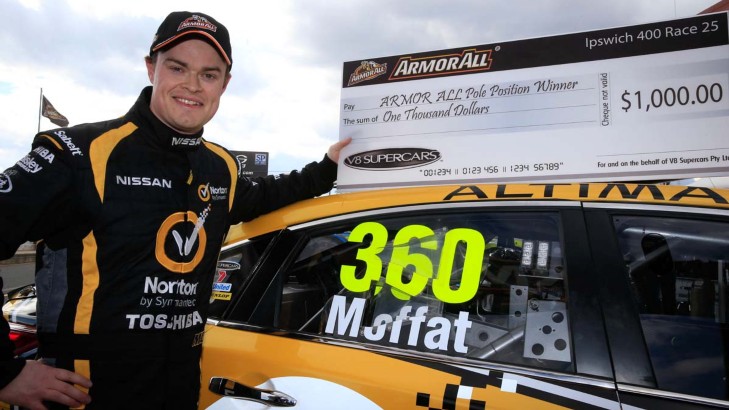 James Moffat has praised Norton Hornet teammate Michael Caruso and his engineering crew for playing a vital role in helping him achieve his shock first V8 Supercars Championship ARMOR ALL Pole Position in qualifying for Race 25 at the Coates Hire Ipswich 400.

After two days of struggle at Queensland Raceway, Moffat revealed he and his crew had last night gone through the set-up for Caruso's Nissan Altima and used them on his own car today.

Caruso had shown great pace on Saturday, qualifying second for Race 24 and contending for the win until being handed a drive-through penalty for tipping race leader Scott McLaughlin's Valvoline Volvo into a spin.

"We have got the 36 guys to thank a lot, we basically picked out their set-up as much as we could and then got it all together," Moffat told v8supercars.com.au.

"The car was driving much better. I don't feel like was driving any better today but somehow we are on pole."

And having achieved the first pole by a Moffat since father Allan last topped the grid of a touring car race 30 years ago, James says he is confident he can race for the win in this afternoon's 200km mini-marathon.

"We have had pretty good race pace on the soft tyre all year and in the 200km we have been able to come through the field most times, just that before today we have been starting too far back.

"So I have a good opportunity this afternoon to hopefully cash in."

The four-car Nissan Motorsport crew had arrived at QR with low expectations, but all four cars have shown pace in qualifying and races, with Rick Kelly fifth in Race 24 in his Jack Daniel's Altima the best race result so far.

"I am as surprised as anyone about today's result, but obviously Mike and Rick proved yesterday that the cars are quite speedy," Moffat said. "We were braced for a pretty tough weekend based on the layout of the circuit.

"But around here if your car is not working well it doesn't matter how much power you have got and we are confident in how our cars have been handling."

On a personal level Moffat said his first pole didn't mean a lot to him as yet.

"It will probably take a little while to sink in," he said. "Right now though, I am focussing on the race."