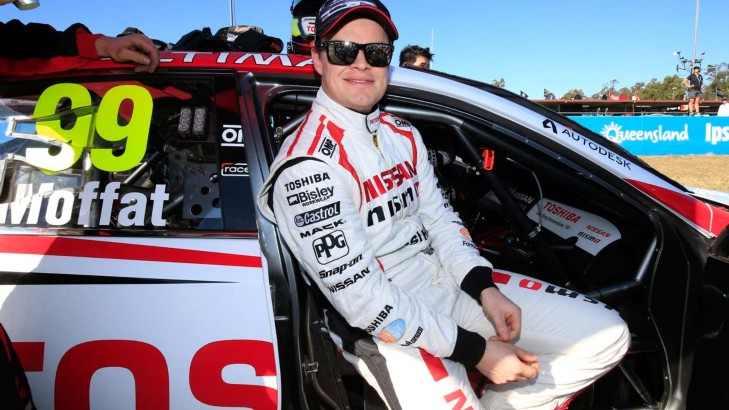 Moffat's contract with Nissan Motorsport is up at the end of this season and as yet the Kelly brothers-owned team hasn't found the commercial funding to re-sign him to a new deal.

While the team has long insisted retaining Moffat is its sole focus, Todd Kelly told v8supercars.com.au the team accepted the 31-year old might find his own deal somewhere else and move on before it can find backing.

"We don't want to do the wrong thing by James by dragging him out and not being able to put the deals together around him to re-sign him," said Kelly.

"It may come to a point where we may not have something to offer him and he may have another option which he will need to take.

"We might be able to put something together later in the piece, but it's one of those things you need to keep talking about on a weekly basis to see where everything is at without having expectations of a deadline for either party."

Kelly confirmed the team was still searching for money to keep Moffat in an Altima.

"It would be good to keep him for continuity reasons ... and the relationship with him and his crew and everything are quite good.

"So we just need to get a lot of things to stack up around that to make that happen. We are working pretty hard on that at the moment.

"There are a bunch of things that need to come together to sign it all off, which we are working hard on."

Kelly also acknowledged Nissan Motorsport might eventually have to select a driver for Moffat's car who can bring sponsorship.

"There are always a lot of drivers around who have sponsors that are in the market which would prefer specific drivers," Kelly explained.

"So there always those sorts of drivers who are around. We just have to keep working and we are not quite there and see where we get to."

Speaking on behalf of his client, Moffat's manager David Segal confirmed his driver's future was uncertain.

"He is keen to stay at Nissan but it depends on the team finding the funding," the managing director of Advantis Sports Management told v8supercars.com.au.

"We are exploring other options but it is a tough market as so many drives depend on funding now."

Fabian Coulthard is the front-runner at DJRTP and David Reynolds looks to be in a similar situation at BJR, while Moffat isn't understood to be the number one choice at Tekno. Just who is on Garry Rogers' list at Volvo is an unknown.

Whatever way the Moffat scenario pans out, Kelly confirmed the team would be lodging four entries for the 2016 championship.

The entry deadline for next year has been brought forward to Friday October 16.

"It's definitely going to be four cars," Kelly said.

"Our whole team and our business model and all the manufacturing and how our whole team operates is built around four cars.

"And obviously we have our agreement with Nissan and other sponsors which are along those lines as well. So either way it will be the same as it has always been."

Last year at Bathurst Moffat qualified in the top 10 and finished second despite co-driver Taz Douglas crashing twice on the crumbling surface.