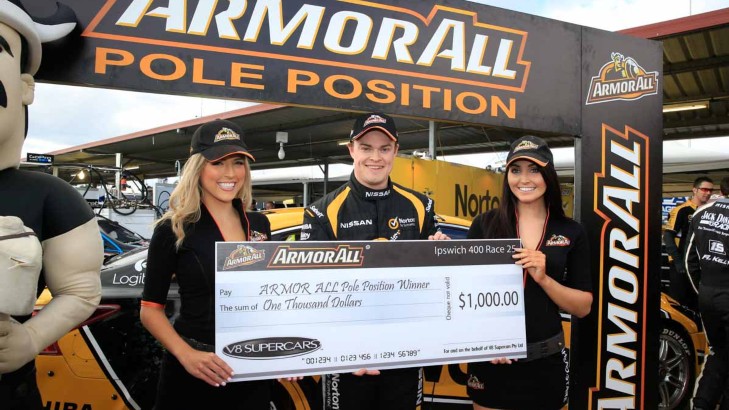 The roll continues for Nissan Motorsport, with another Norton Hornet to start from ARMOR ALL Pole Position at the Coates Hire Ipswich 400.

Today it was James Moffat with a 1min09.1539 lap, holding off Holden Racing Team's James Courtney by 0.182sec to earn his first V8 Supercars pole.

He has started from the front row just once in his career in the category, at the Gold Coast in 2013.

"I'm probably as shocked as anybody in pitlane is!" Moffat said jumping out of the car.

"We've really been battling this weekend. I put my little buddy's (Michael Caruso's) setup in today and it worked for us. He had terrible hard luck yesterday and probably should've had a win.

"To get the first Norton pole was pretty special."

The last time a Moffat started from pole was in 1984 at Surfers Paradise.

"Hopefully that gives dad at home something to be proud of when he watches this afternoon.

"Obviously there's a long 200km race to go. We've had good race cars over times, so hopefully we can keep it there."

On the second row is Scott McLaughlin, who sat at the top for the majority of the session, with Nick Percat alongside.

Following is yesterday's double winner Jamie Whincup, Chaz Mostert, Michael Caruso, Championship leader Mark Winterbottom, Craig Lowndes, and Will Davison. All five manufacturers are represented in the top 10, which is spread by 0.37sec.

Caruso: 'I have no regrets'