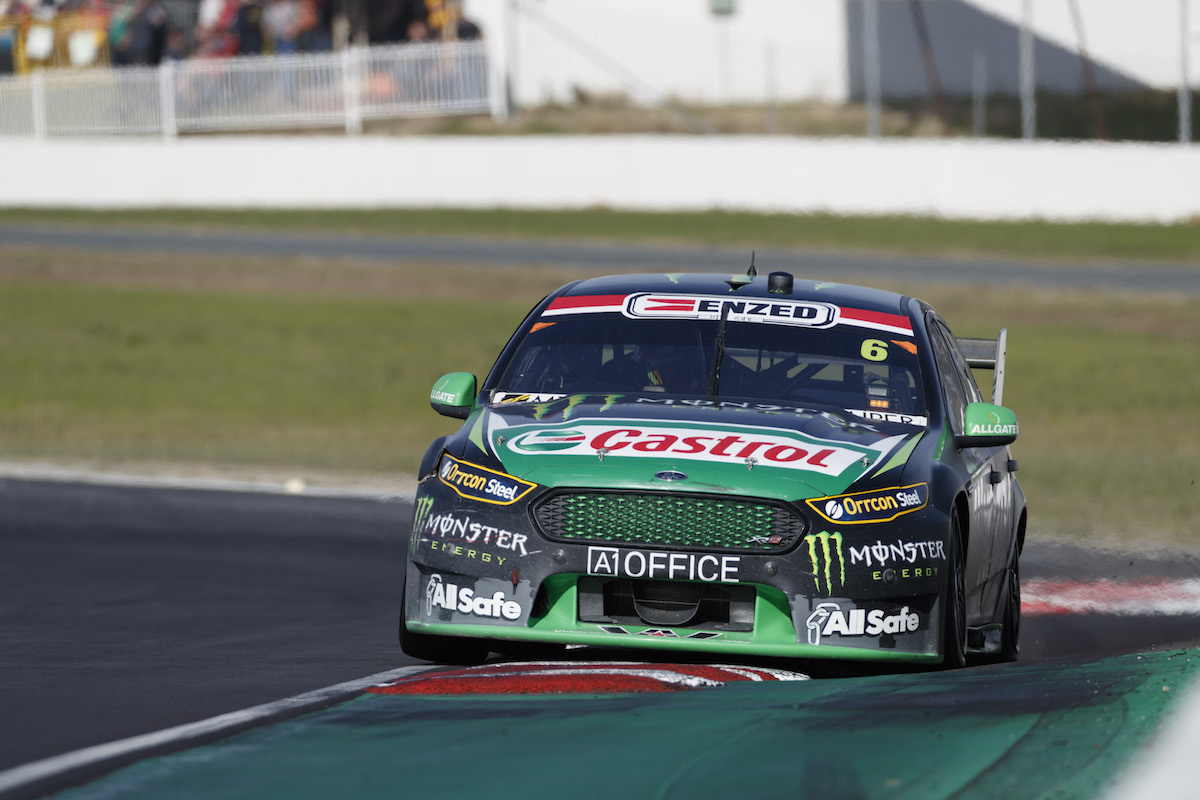 Cameron Waters feels today’s rookie test at Winton Motor Raceway will give him a boost before ending his debut Supercars season next week.

The young gun’s results have tapered off since his impressive fourth place finish at Bathurst with Jack Le Brocq, but he believes his team made progress out on track today with mixed conditions that allowed him to sample the Monster Energy Falcon in both the wet and dry.

Working with his regular crew, including race engineer Brendan Hogan and Prodrive chief engineer Nathaniel Osborne, the group worked through a standard plan to learn as much as possible before the final round and off-season.

“It rained a little bit this morning, which was good, it was good to actually drive the car in the wet because you don’t actually get to do it that often,” he said, adding that it also rained at the end of the day with an hour to go.

“It was a really good day testing, just worked on some things I’ve been struggling with at the last few rounds; we’ve made a few little improvements with that.

“It’ll be good to now go to Homebush and put what we learned to use.”

Waters estimated he completed 90 to 100 laps and had a good tyre bank after DNFs at Sandown and Gold Coast – and the team wasn't scared to use them with the switch to new compounds for next year.

The concrete-lined Coates Hire Sydney 500 street circuit is one of the toughest on the calendar, so coming in with that added confidence is a benefit for Waters.

“You need to have confidence in the car on a street track because you’re on the kerbs and rubbing up against the walls, so that’s pretty key around those places – particularly through Sydney. So what we learned today should help me around Sydney, I think.

"It should help me everywhere – but Sydney particularly.”

After Chaz Mostert’s season-ending injury last year, Waters stepped into the Prodrive Ford Falcon FG X as a stand-in. But the Sydney finale was the one main game round Waters didn’t get to sample, as rules prevented him from running in both the Supercars Championship and Dunlop Series – the latter of which he won the title.

He believes the opportunity to have a rookie day was valuable given how close the category is and how limited time behind the wheel has become.

“As a rookie it’s pretty tough, and rookie days do help a fair bit because you don’t really get to drive the car that much – any chance to get in them and try some of those things you might have a question mark over, it’s good to go to a test day and do that. Hopefully for me it helps me a little going into Homebush.”

Waters sits 17th in the championship with his other season highlight ARMOR ALL Pole Position early on in Perth.