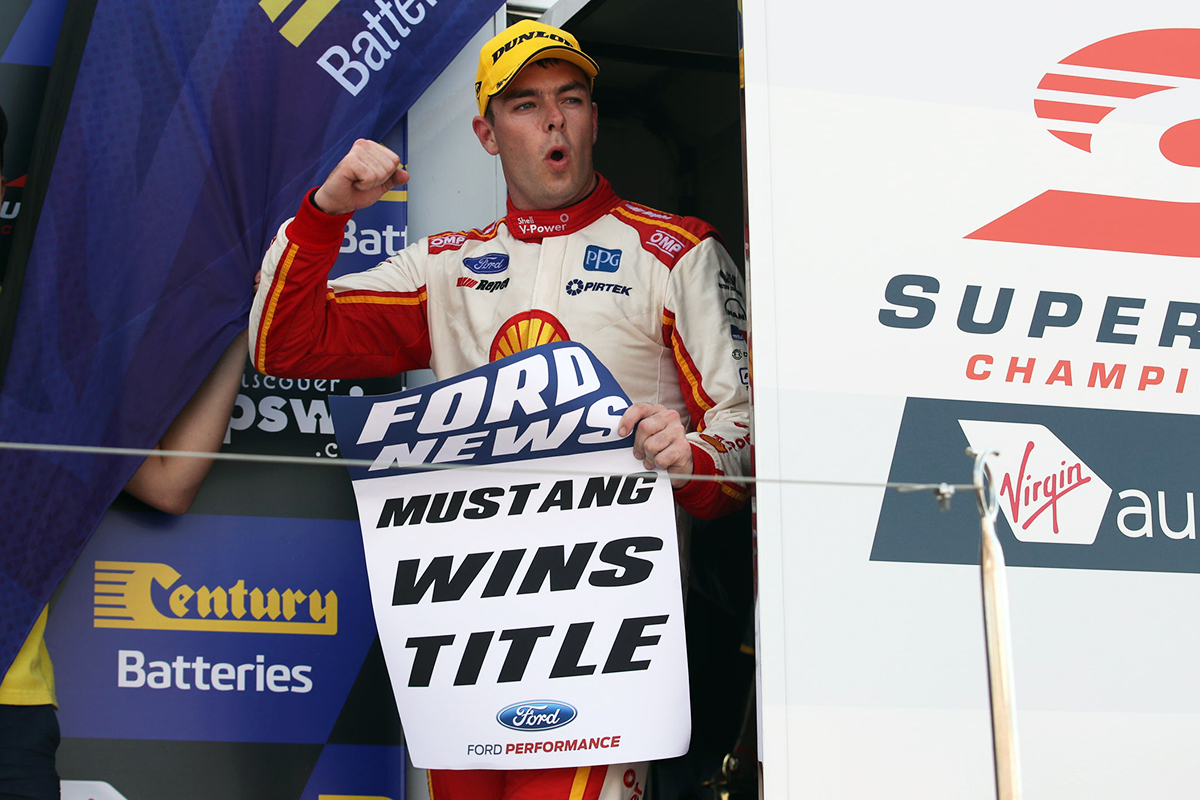 Scott McLaughlin and Shell V-Power Racing boss Ryan Story have issued humorous responses to the $13,000 in fines dished out on Sunday.

Race winner McLaughlin was hit with a $10,000 punishment for taking a Ford poster onto the podium, celebrating the marque wrapping up the manufacturers’ title.

The move breached regulations stating that “no promotional or marketing material is permitted on the podium or to be held aloft in front of the podium at any time”.

He was also docked $3,000 for performing a burnout past the pit entry on his slowdown lap; a rule designed to protect those waiting in the victory lane area.

Do you guys take @ARMORALLAusNZ pole cheque’s as terms of payment? 🤪 https://t.co/7gRoaTgFE8

Responding to news of the fines, McLaughlin wrote on social media: “Do you guys take ARMOR ALL Aus & NZ qualifying cheques as terms of payment?”.

McLaughlin has claimed 13 ARMOR ALL Pole Positions so far this year, each worth $1,000.

Team boss Story meanwhile posted a photo on Instagram of the victory celebrations, quipping that it was an “incredible moment and the most expensive poster I own”.

Incredible moment and the most expensive poster I own 😂 #vasc

Sunday's victory was the 14th of McLaughlin's Supercars title defence.

Speaking before the fines were handed down, McLaughlin lauded the effort behind wrapping up the manufacturers’ title, which is determined solely on race wins.

“It’s two-and-a-half, three years of hard work,” he said, referring to the development of the Mustang, for which Shell V-Power Racing acted as the homologation team.

“For everyone here in Australia, Ford Australia and also Ford Performance in the [United] States and everyone that’s been on the project.

“It’s a really proud moment, unfortunately Mark Rushbrook from Ford Performance wasn’t here, but to win the title so early is very cool.

“Obviously it’s shown that we have been fast and won it.

“I’m proud to do it for our team and I feel like we’ve added to a lot of those wins this year and it was nice to bring it up with our car.”

In addition to McLaughlin’s 14 wins, Coulthard has two for the season and Tickford Racing’s Chaz Mostert one.