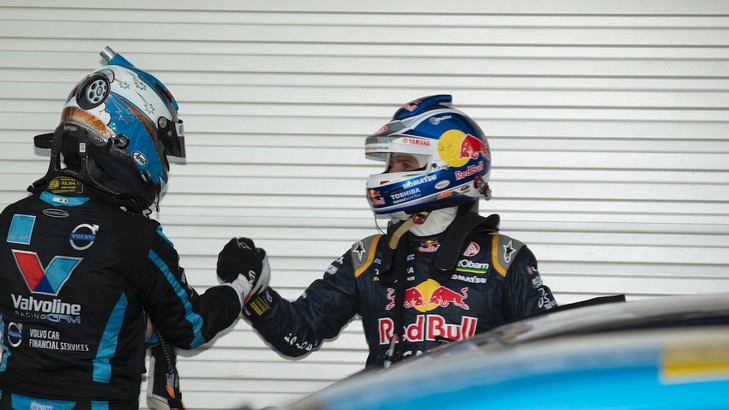 After stunning fans and pit lane by qualifying his new Volvo S60 on the front row for the second race, McLaughlin held his own through the 125km race, with Whincup on his tail for the 39 laps.

Winner Craig Lowndes jumped from ARMOR ALL Pole Position and didn’t waiver, crossing the line 4.7 seconds ahead of McLaughlin.

The young kiwi was almost in the wall battling with Whincup, but drove up the inside on the final turn to a crowd on its feet.

“My boys, I can’t thank them enough!” McLaughlin enthused on the grid. He jumped on the bonnet of the Valvoline-backed Volvo S60, something usually done by the race winner.

“Amazing, Richard (Hollway, enginner) and the crew, and the fans – you’ve been playing the Volvo jokes but I guess they’re gone now. I’ve never been this happy second!

“I was an idiot, I slowed down too much I should’ve blocked (Whincup) a bit better. He got me, we went side by side racing, I plucked it into first, gave it a bit of jandal, got by him and f*** yeah!”

“The crowd’s happy, that’s the main thing,” he said getting out of the Red Bull Commodore.

“It’s all about going hard. We went hard at the end, Scotty did a great job, hard and fair.”

Even Lowndes was enthralled in the battle as he sailed across the finish. “I had the victory but was watching these guys hammer and tong!” Lowndes, who has always paid credit to McLaughlin, said.

It was an action-packed race, with James Courtney losing a passenger door after contact – he crept up between Scott Pye and Lee Holdsworth, but his Holden Racing Team Commodore came off second best.

Lowndes leads Whincup, Winterbottom, McLaughlin and Coulthard in the points accumulated from the day's two races.

Jamie Whincup  ›
15' Red Bull Racing Australia ›
2014 Clipsal 500 Adelaide  ›
Stay In The Know
Sign up to the Virgin Australia Supercars Championship Newsletter
We use cookies to ensure that we give you the best experience on our website. If you continue to use this site we will assume that you are happy with it.Ok