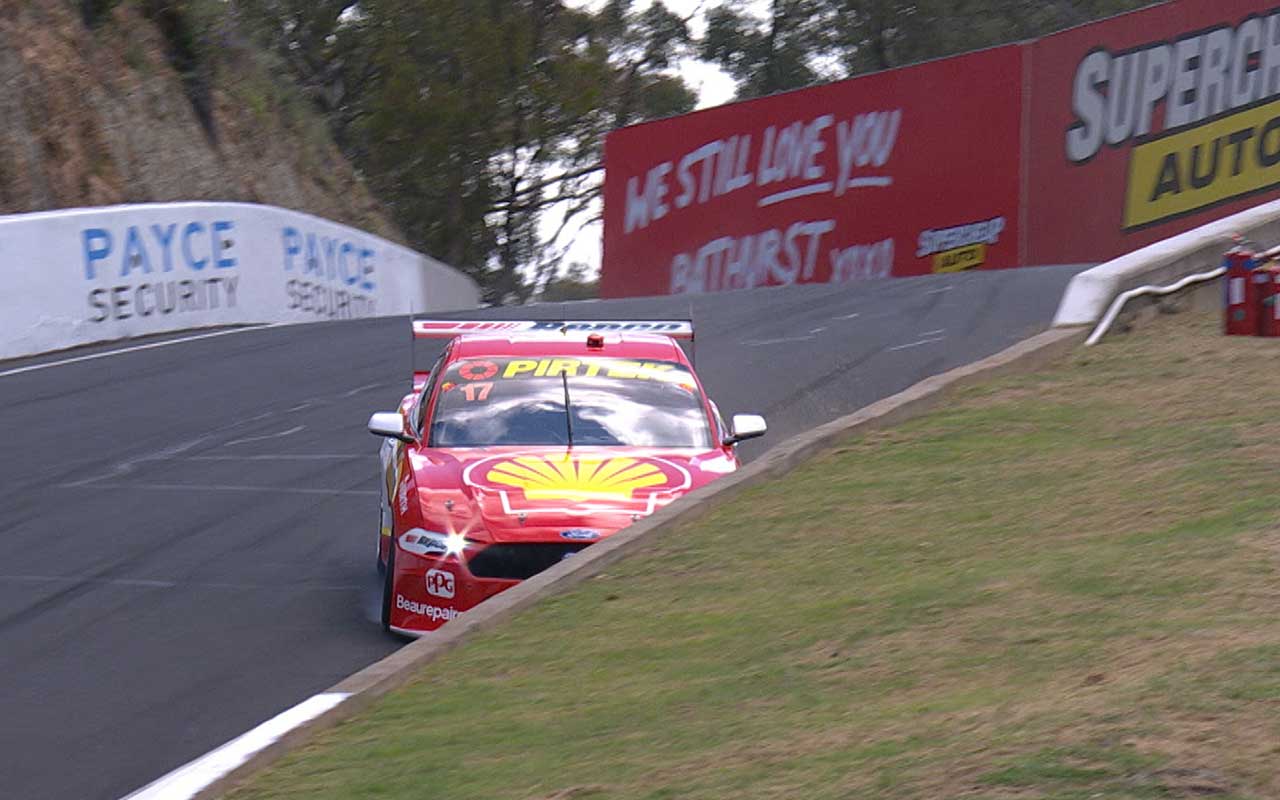 Scott McLaughlin has topped the last practice session before ARMOR ALL Qualifying at Bathurst, despite crashing out in the dying minutes.

McLaughlin led the way as the field headed out for their final preparations for this afternoon’s 40-minute qualifying session.

With intensity levels soaring, McLaughlin looked poised to become the first driver to dip into the 2:03s this weekend when he made a mistake on the run to Forrest’s Elbow.

The Shell V-Power Racing Mustang speared side-on into the fence and spun, before limping back to pitlane with apparent left-rear suspension damage.

“I just ballsed up the downshift, that was all it was," McLaughlin said.

“We’re using the engine braking so much that as soon as you miss one you’re out of the groove.

“That’s all I did. I tried to half recover it, but as soon as it plucked the bottom arm out [on the wall] I was a bit of a passenger.

“But I think we’ll be right. The car felt mega, I was six tenths up…”

The incident, which occurred with less than two minutes on the clock, means the true pace of several contenders could still be hidden as yellow flags scuppered a series of fast laps.

Lee Holdsworth was third ahead of Tickford Racing teammate Cameron Waters, who shapes to be in the hunt for provisional ARMOR ALL Pole; he and co-driver Will Davison have already topped three sessions thus far.

McLaughlin led the field for the majority of the first 30 minutes of Practice 5 until Chaz Mostert upped the stakes with a 2:04.7582, lowering the benchmark by more than six tenths.

From there, Waters and Jamie Whincup had turns at the top until McLaughlin’s effort.

Whincup ended up fifth from Shane van Gisbergen, Mostert and an impressive Alex Davison in eighth for Team Sydney.

A number of drivers missed a chunk of track time, with Todd Hazelwood a late starter as his Brad Jones Racing crew completed repairs following a Practice 4 crash for rookie co-driver Jordan Boys.

Garry Jacobson missed the entire second half of the session, with an engine change required on his #35 Matt Stone Racing Commodore.

“We had an oil leak yesterday we were monitoring… we thought we were managing it right and then it just got too much,” he said.

“We’ll go back to our spare engine. I’m grateful we have so much practice [on Saturday] after qualifying today.”

David Reynolds was a disappointing 20th, having spent time in the garage in search of a fix to set-up woes.

ARMOR ALL Qualifying will get underway at 4:05pm today, setting the grid slots from 11th to 25th, with the fastest 10 drivers making it through to the Shootout tomorrow afternoon.