Scott McLaughlin extended his streak of ARMOR ALL Pole Positions at Phillip Island ahead of Race 10 of the Supercars season.

It means McLaughlin has taken the last six poles at the Victorian circuit, through qualifying sweeps in 2016, ’17 and ’18.

Following the penalty that dropped him from second to 14th in Saturday’s race, Jamie Whincup led early with a 1:30.6050s.

The Shell V-Power Racing Falcons did not set indicative times on their first runs, Fabian Coulthard going off at the Southern Loop.

McLaughlin went straight to the top with his first proper effort eight minutes in, his 1:30.2070s four tenths clear.

Michael Caruso, Whincup and Rick Kelly all trimmed that advantage back to two tenths by the time there was seven minutes left on the clock.

Reynolds then got within 0.0470 seconds of McLaughlin, before drivers set out for their final runs.

Inside the final minute, Whincup set the fastest time through the first sector, before McLaughlin blitzed the second and third.

While Whincup did not improve, McLaughlin went on to record the session’s only sub-1:30s lap.

“It’s awesome. I’m very lucky, I’m driving a very good car in a great team, and prior to that I was driving a great car as well,” he said.

“That lap was OK. At Turn 1, I wish we could have gone a little bit better there, I’m always chasing more.

“Today was harder because there was less grip on the track, it was very slippery out there, so it was quite loose, driving like a go-kart almost and just having a lot of fun.

“I’m living the dream. I can’t wipe the smile off my face.”

Reynolds will share the front row with the championship leader, while Coulthard, Kelly, Whincup and Caruso will complete the top six.

“He ran a different set-up and was miles faster than me, so we stole his ideas and implemented them to our go. Thanks brother.

“My lap was alright,” he added. “The first set of tyres, the car was fundamentally different, so I had to get used to that.

“On the next set I had a big stab, went a bit faster and ended up second, so an awesome job by the team.”

“It’s nice again,” Courtney said. “We didn’t quite get the most out of it in that last run, I went into Turn 1, had a bit of a push and dropped a wheel off, which was a bit annoying.

“The second run went pretty good. It’s nice to be in the top 10 again, I didn’t like being back where we were last year yesterday. It’s a lot easier from where we are today.”

In a tightly-packed group behind Coulthard, Shane van Gisbergen and Mark Winterbottom rounded out the top 10 ahead of Chaz Mostert, Scott Pye and Craig Lowndes.

The power steering issues that plagued van Gisbergen in Race 9 were fixed in time for the session.

“It’s actually a problem now,” he said of the steering being fixed.

“Yesterday it wasn’t ideal, but you had such good feel of everything, and then today the problem is fixed but I’ve got no feel in the steering.

“I’d gotten used to 250km [with the problem] and then it’s completely different this morning.

“But the car’s fine, we just weren’t quick enough.”

Nick Percat missed the bulk of the session as Brad Jones Racing continued to work through the front-splitter issues that marred his Saturday race. 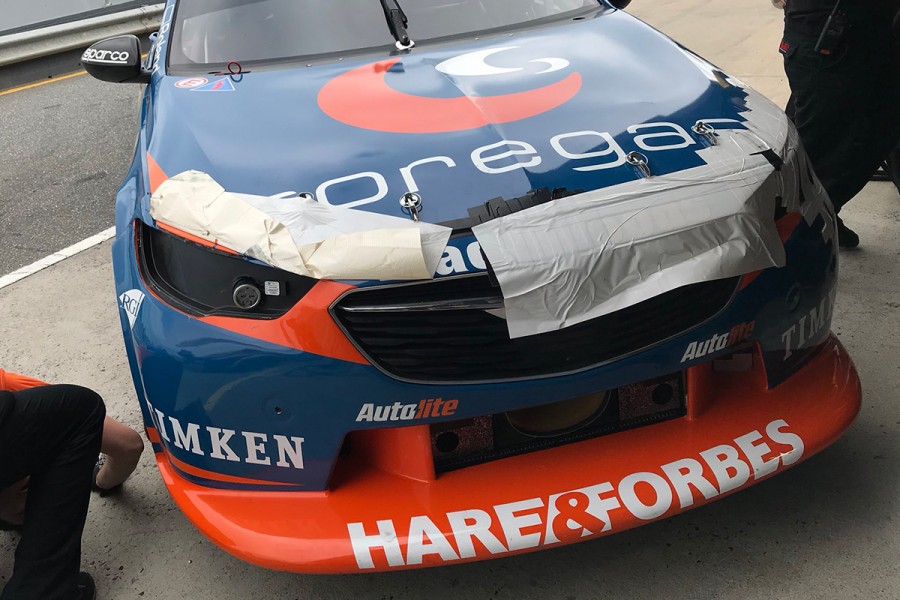 Percat finished at the foot of the times with an effectively-token 1:32.4937s.

“We only had one of the type of bar we ran yesterday and we destroyed that, so now we’ve got one of our old ones on and it’s a bigger problem than it was yesterday,” team owner Brad Jones said.

“I'm not sure what we'll do, but we’ll try and address it before the race.”