Scott McLaughlin has claimed ARMOR ALL Pole Position for the opening leg of the Vodafone Gold Coast 600, with title rival Shane van Gisbergen to start ninth.

The Shell V-Power Racing driver turned a 1:10.3744s to lead the way in the Top 10 Shootout, while provisional polesitter van Gisbergen recorded a kerb strike.

That left the Red Bull Holden Racing Team driver without a time, and starting from the fifth row of the grid.

McLaughlin's Ford will share the front row for the race later on Saturday afternoon with Jamie Whincup's Holden.

With the result, McLaughlin has also secured the ARMOR ALL Pole Award grand prize for a second-consecutive season, moving to 12 for the year.

The seventh driver out, McLaughlin put 0.3559 seconds on the erstwhile benchmark set by team-mate Fabian Coulthard.

That kept him ahead of David Reynolds and Whincup, who followed and closed the gap but could not get within two tenths.

It was all down to van Gisbergen, who triggered the sensor at the beach chicane and had his lap scrapped.

Van Gisbergen will start ninth, alongside James Courtney who suffered a similar fate earlier in the single-lap runs, but qualified lower in the regular session. 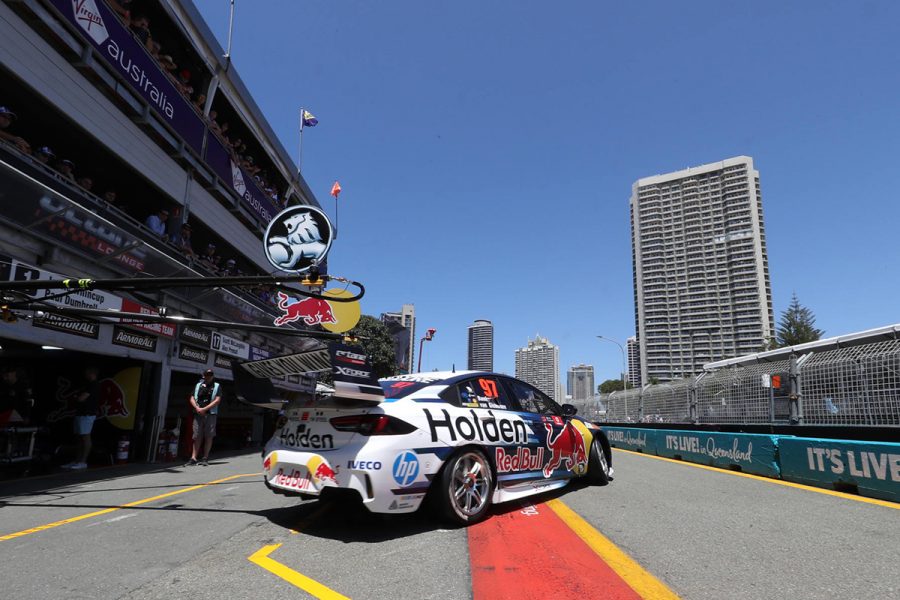 “I just pushed too much. It’s a shame, the first sector I mucked up and was just trying to make it back,” van Gisbergen said.

McLaughlin starts the 102-lap race trailing van Gisbergen by 19 points in the fight for the Supercars Championship.

“I felt we could have done it in that first qualifying and just didn’t put the lap together, but to do it in the Shootout is fantastic,” McLaughlin said.

“It’s a great prize, obviously, being on pole, but we need to do it in the race. We’ll give it a good hard crack.”

“I was happy with my lap,” Reynolds said.

“We made a little change to get a bit more turn to find the couple of tenths we need it, but it made it really edgy and unpredictable.”

Through the first half of the runs, drivers gradually improved on the existing benchmarks to go fastest.

They will sit fourth through to eighth, ahead of van Gisbergen and Courtney.

“They’re joking with all those hop things aren’t they?” Courtney, fifth provisionally, said when informed of his infringement by television commentators.

“It just ruins it for everyone. There’s better systems.”

Waters was the first driver out, with roaded tyres on his Monster Ford, swiping the tyres at the first chicane on his way to a 1:11.3938s.

Beyond the top 10, Rick Kelly and Mark Winterbottom will start 11th and 12th.

Craig Lowndes will be 21st, after incurring a five-place grid penalty for impeding Richie Stanway in the closing stages of qualifying.