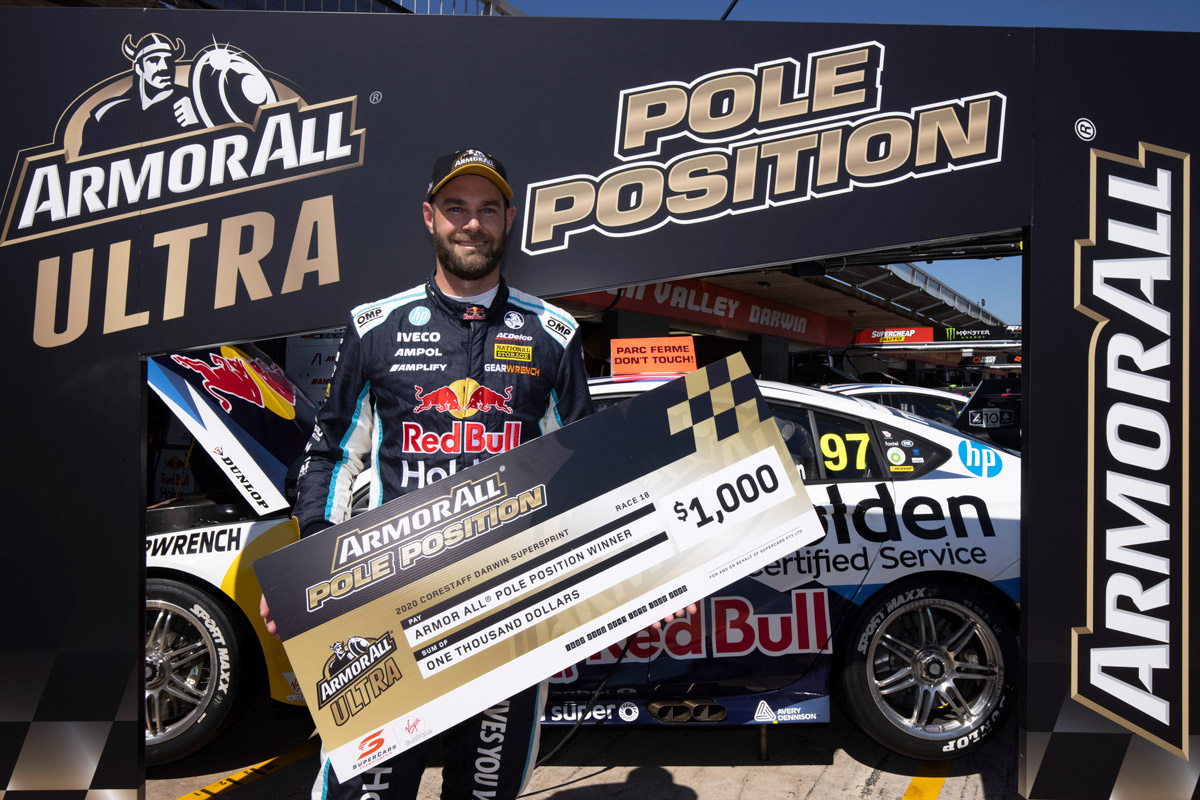 Scott McLaughlin and Shane van Gisbergen have split the ARMOR ALL Pole Positions on Sunday at the CoreStaff Darwin SuperSprint.

The pair of 10-minute qualifying sessions both featured a thrilling conclusion, with just fractions separating the two key contenders.

In the first hitout, van Gisbergen was one of few who did an initial run, setting an early 1:06.5851s benchmark.

McLaughlin scored pole for Race 17 of the season with a 1:06.2585s right at the end, while van Gisbergen improved to be just 0.0565s adrift and secure second.

Van Gisbergen then turned it up further in the second session, clocking 1:06.2898s to be 0.0302s clear of McLaughlin and score the Race 18 pole.

The Holden star had on Saturday struggled to 11th in qualifying and eighth in the race, but was boosted by receiving a fresh engine overnight.

“I really just have to thank the guys, they put in a big effort changing the motor last night and then Shippy [engineer Grant McPherson] going through the set-up.

“We just had to go back to basics and the car was awesome right from when I left pitlane, so just can’t thank the guys enough and just made me much more comfortable.”

Van Gisbergen ran directly behind the two Shell Mustangs during his crucial lap, gaining a slipstream down the long front straight.

“I just tried to stick with these guys,” he said.

“I know that they’re always quick in quali and we were lacking a bit of straightline but no problem today, and then I had a slipstream too so even better.”

Team 18 enjoyed a strong showing in both sessions, with Scott Pye and Mark Winterbottom third and fifth on the Race 17 grid.

Winterbottom went even better in the second session to be third, missing pole by just 0.0329s, while Pye will start that race from eighth.

“I thought the car was better in the first quali, I probably didn’t do as good a lap. The second one we just detuned it a bit but smashed the lap,” said Winterbottom.

“I’m rapt. As a team, although our race didn’t go that great yesterday, we’re attacking the timeboards, we’re getting credibility and we’re learning, we’re moving forward.

“Now we have got to turn that into trophies and try to get some good results.”

Percat improved to fourth in the Race 18 session, having run early believing the track would become slower throughout the session.

The top 10 on the Race 18 grid will be completed by Chaz Mostert, Waters, Whincup, Pye, Anton De Pasquale and Heimgartner.

Coulthard managed just 16th in the second session, while David Reynolds struggled in both, securing 17th and 12th on the respective grids.

The two 38-lap races will complete the CoreStaff Darwin SuperSprint this afternoon.