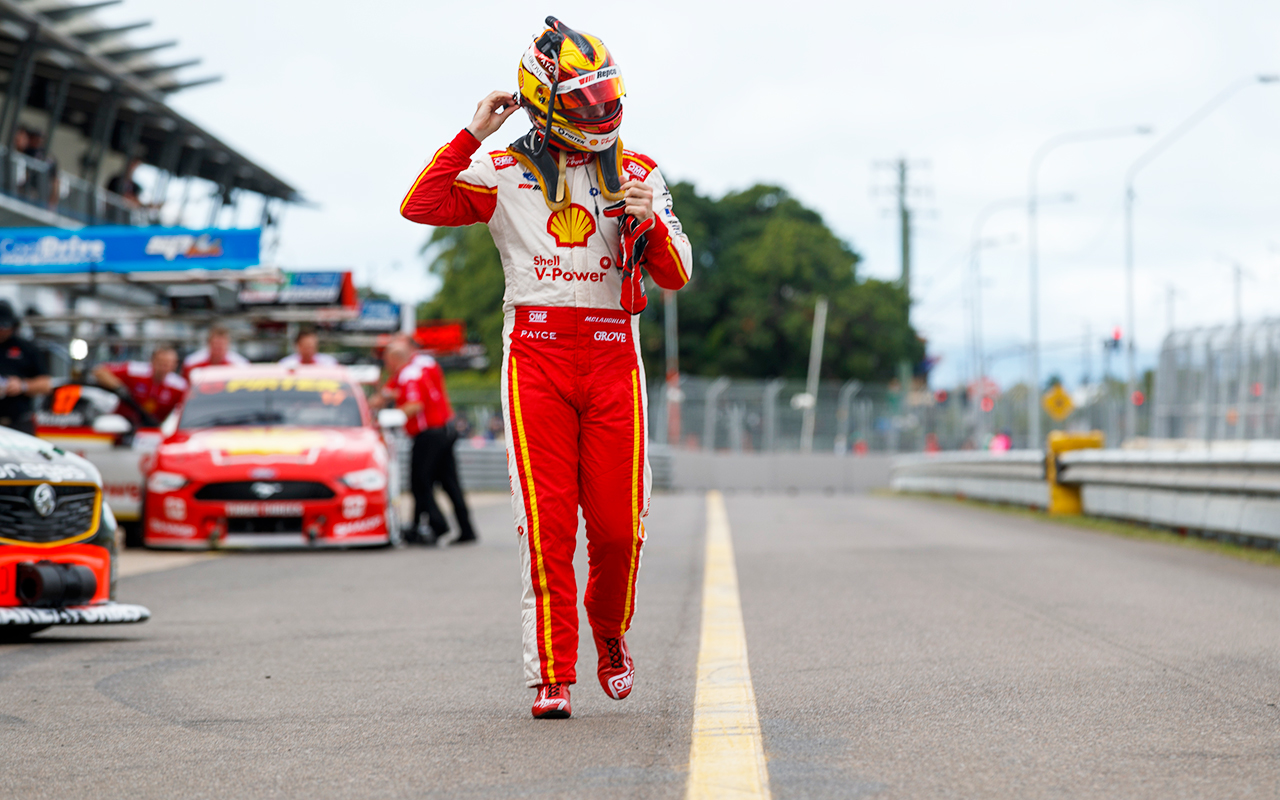 Scott McLaughlin has opened up on his passionate response to a clash with David Reynolds at the Watpac Townsville 400, labelling their current dynamic “a good rivalry”.

The duo collided on the opening lap of the rain-hit Sunday race as Reynolds attempted an inside pass into Turn 2, with left-front to right-rear contact hampering both cars.

McLaughlin went on to finish 11th, ending a six-race winning streak, and labelled 20th-place finisher Reynolds a “desperado” in a post-race television interview.

Reynolds has been outspoken about the strength of the equipment at McLaughlin’s disposal amid a dominant run for the reigning champion in 2019.

McLaughlin quipped before Townsville that he’s been “copping it from Reynolds… I don’t know what I’ve done to Reynolds”.

While the Holden driver subsequently deflected suggestions of a brewing feud, McLaughlin labelled it a “good rivalry” on the latest episode of his Balls and Bumpers podcast.

“Dave says he wants to be friends with everybody and all of that sort of stuff, but he’s competitive, we’re all competitive, we all want to beat each other,” he said.

“In this sport you’re going to get to a point where you don’t like someone, you can’t like everyone, that’s just BS. It’s a rivalry, it’s a good rivalry.

"It’s not going to affect me going for a move on him or racing him side-by-side because I think it’ll just be the same, but it’s probably a bit different off track."

McLaughlin went down to see Reynolds about the Townsville incident twice post-race, in what appeared a large reaction to what officials had deemed a racing incident.

“I just wanted to know what happened. I just felt the hit in the rear, so that’s how it is,” explained McLaughlin.

“Honest, I went down there and got yelled at left, right and centre by the whole garage pretty much.

“So I just walked off, they told me to look at the footage, I did, and I came back with the footage and then it was just, I may as well bang my head against the wall.

“We’ll just move on. I’m passionate, I want to go well, I want to do the job for my team.

“I’m not just going to sit there and say ‘that’s all good, we got hit, it stuffed our whole race, whatever’."

McLaughlin and Reynolds remain at odds over who was at fault in the incident, with the Holden driver adamant his rival moved under brakes.

On his own podcast, Below the Bonnet, Reynolds also reflected on the incident and post-race confrontations, saying: “Of course he wasn’t happy, which I can understand.

“His day hadn't gone his way, so he's looking for someone to blame. He's trying to blame me and I'm saying, 'I'm trying to blame you, you moved under brakes, you’re not allowed to'.

“It might have been a foot to half a metre, [that's what] I'm saying. It was all I didn't need to happen, is someone to move under brakes.

“If he'd come up to me and said 'I'm so sorry man, I was pulling out to pass [leader Cameron] Waters’ I would have gone 'okay, you were trying to make a move and you didn't see me, completely understandable'.

“But Waters was so far in front of us that that wasn't a possibility.”

McLaughlin surmised: “I was overly cautious, a bit of water, I was worried about the wet lines and that sort of stuff, backed off a little bit and Dave probably saw an opportunity.

“I believe he made a gap, he didn’t actually go for one. It shows when he’s hit my rear wheel there... he hasn’t gone up beside me or anything like that.

“He says I moved, I don’t believe I moved, if anything it was a millimetre, which sometimes when you brake pretty hard, things move around, especially in those conditions.

“But I’m not really stressed. Rivalries are good for the sport. This has been a massive talking point for a lot of people.

“For me, I’m still leading the championship, that’s what I’m worried about, and Davey’s probably hurt himself more than it’s hurt me.”