Saturday's running got underway with a 30-minute session, from which the top 10 skip the first phase of knockout ARMOR ALL Qualifying.

McLaughlin led the way with a 53.3841s in his Shell V-Power Racing Mustang, despite sitting out the closing stages.

He finished with a 0.0809-second advantage over the Red Bull Holden Racing Team's Whincup, while Chaz Mostert took third for Tickford Racing.

McLaughlin and then Mostert took the field into the sub-54s bracket during the first 10 minutes, the latter's 53.7021s the benchmark.

That stood as the time to beat into the final 10 minutes, with a mid-session McLaughlin effort to improve coming unstuck at Turn 1.

A gain from McLaughlin came with eight minutes to go, a 53.3841s putting him three tenths clear.

Mostert trimmed that advantage by a tenth, and McLaughlin opted against running again in the closing stages.

Whincup got within 0.0809s but McLaughlin could not be unseated.

"The car feels nice. To do that and save a set of greens is really good," McLaughlin said.

"I reckon the track has lost a fair bit of grip and it’s lost some blackness," he added.

"I reckon it’s less grippy in places, so you’ve got to adjust your lines so you stay on the grippier stuff."

Whincup had to navigate Q1 on Friday but avoided a repeat on Saturday. 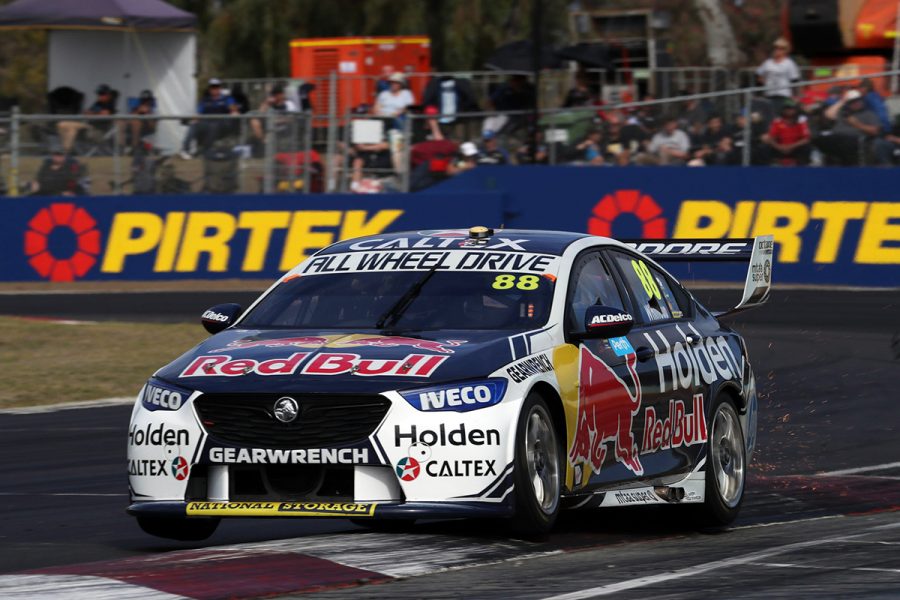 "We’re still trying to learn the car. There’s limited testing, limited laps on new tyres so we’ve got to try everything we’ve got," he said.

"We made the car much slower in the middle of that but then got it back to having good performance at the end.

"The guys next door have raised the game. They’re putting down some crazy-good lap times, so we’re trying to hunt it down, which is only a good thing."

Mostert took the same position in which he finished Friday's race, third, ahead of Shane van Gisbergen and Fabian Coulthard, the winner of the opener.

Andre Heimgartner was the lead Kelly Racing Nissan in 11th, missing out by a scant 0.125s.