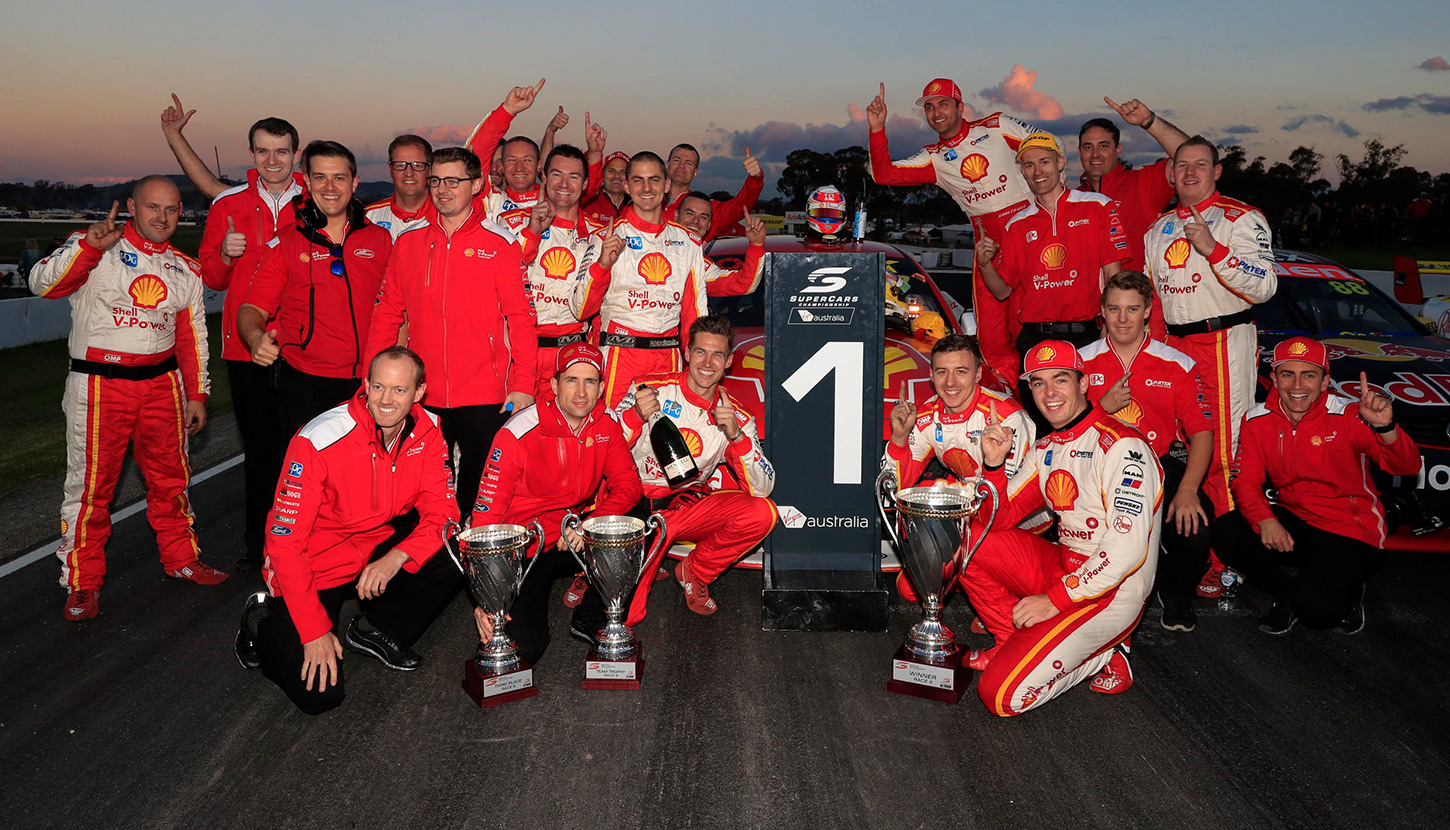 Scott McLaughlin edged closer to the lead of the Virgin Australia Supercars Championship with a commanding win in Race 9 at Winton.

McLaughlin looked unstoppable throughout the 40 laps as he beat home Jamie Whincup, Fabian Coulthard and David Reynolds, who charged from 14th to fourth.

“I’ve got a fantastic car under me that just about drives itself,” smiled McLaughlin, who is now second in points, just 10 behind team-mate Coulthard.

Whincup spent his entire second stint holding out Coulthard, who was unable to find a way by despite having superior speed.

“I don’t like to race like that,” admitted Whincup. “We need to improve the car to find more speed so we can race hard.”

Pole-sitter McLaughlin held the advantage off the start, with Chaz Mostert and Whincup slotting in behind.

The tyre changes for the front runners came early – Coulthard heading to the lane as soon as the window opened on lap five.

Mostert and Whincup waited just one more lap, while leader McLaughlin did two as he made the most of clean air.

The Shell Ford rejoined comfortably ahead of Mostert, who continued to give chase until a rare driveline failure on lap 15 put him out of the contest.

“It’s in the transaxle there somewhere. It feels very clunky and there’s a loss of drive,” said Mostert.

“I feel sorry for the boys. It’s upsetting for the team to go out with a mechanical issue.”

Reynolds, Will Davison and Craig Lowndes (who started just 19th) filled fourth through sixth at the flag after all running long first stints.

Garth Tander was seventh ahead of Shane van Gisbergen, who lost ground with a slow right-rear tyre change and subsequently found himself in the thick of the action..

Mark Winterbottom and Nick Percat rounded out the top 10 after the latter was involved in a controversial last-lap clash with James Courtney.

Courtney earlier dropped to last after an opening lap tangle with James Moffat, but too ran a long first stint and was one of the fastest on track during the closing stages.

The Boost Mobile Holden’s race ended in the Turn 4 gravel after side-to-side contact with Percat fired Courtney off to the left.

Percat started sixth but struggled for a balance with his Freightliner Holden following the pitstops.

Kelly ended up 16th, one place ahead of leading wildcard runner James Golding who put in an impressive drive for Garry Rogers Motorsport.

Like team-mate Mostert, it was a costly day for Cameron Waters who finished 22nd after speeding in pitlane yielded a drive-through penalty.