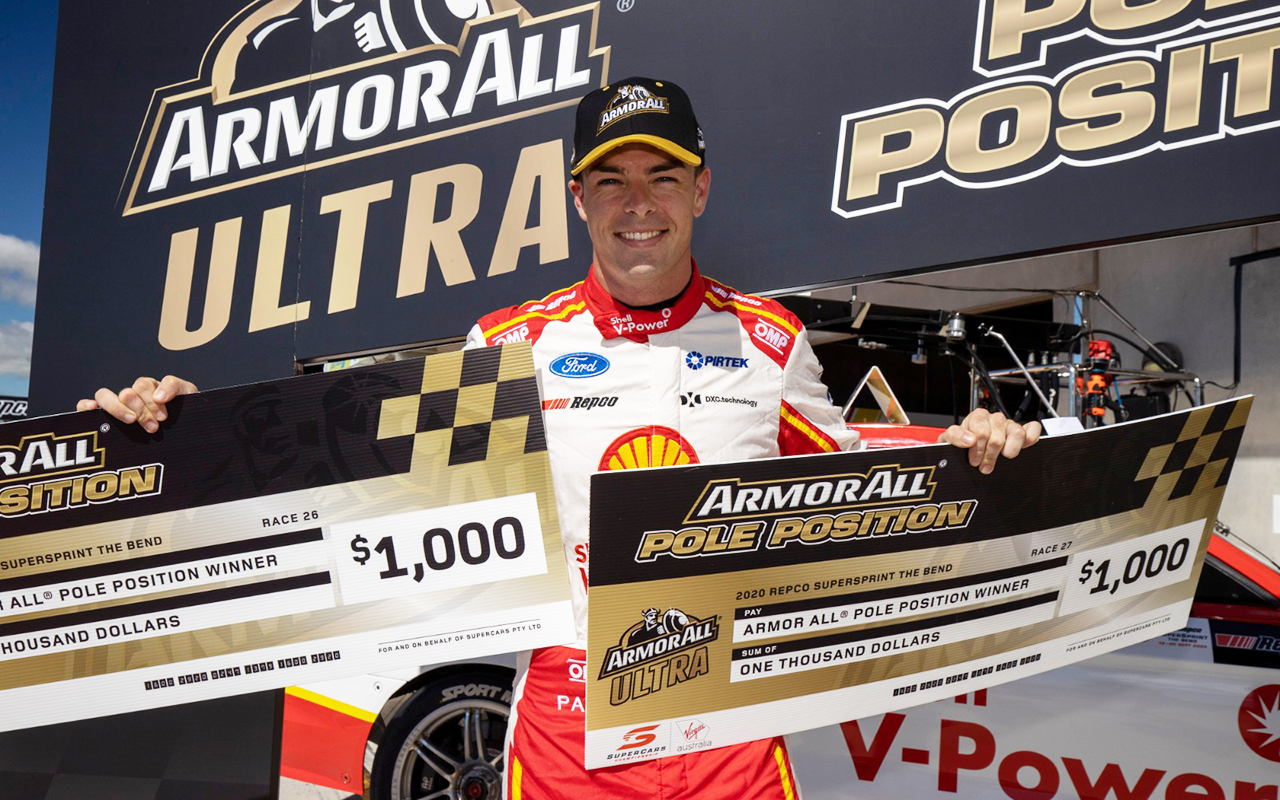 Scott McLaughlin will start both Sunday races at the Repco The Bend SuperSprint from ARMOR ALL Pole, as he continues his chase for a third straight Supercars title.

Bouncing back from a difficult Saturday that ended with a penalty and a 14th place finish, the Shell V-Power Mustang driver was too good in the twin 10-minute qualifying sessions.

McLaughlin recorded a 1:48.0726s in the first session that set the grid for Race 26 of the season, just 0.0694s clear of Shane van Gisbergen’s Red Bull Holden Commodore.

McLaughlin’s chief title rival Jamie Whincup meanwhile was just 11th after making a mistake at Turn 17 on his single hotlap.

Whincup fared better in the second hitout and will start that race from third ahead of Coulthard, Brad Jones Racing’s Nick Percat and van Gisbergen.

McLaughlin now has 12 poles for the season and is a strong chance to increase his championship lead in the afternoon’s 24-lap races.

“[We made a] massive change in qualifying to give me confidence in the rear and it felt really good,” he said.

“Obviously it was a pretty crazy race yesterday and hopefully we can have a good couple of starts and see where we are at the end of the first lap.”

Whincup meanwhile faces a tough task in the opener to move forward from 11th on the grid.

“To be honest I think it all started with starting the lap, I didn’t get a really good outlap,” he reflected of the first session.

“The car was good through the first couple of sectors but couldn’t go on with it, and I made an error as well which was a double-whammy.

“The field is so tight at the moment if you make a small error or the car is not perfect and boom, you lose two spots.

“We maximised the second run, that’s probably as quick as we were going to go, P3, but I’m disappointed we didn’t maximise the first.”

Saturday podium finishers Jack Le Brocq and Bryce Fullwood both struggled, failing to make the top 10 in either session.

BJR’s Macauley Jones meanwhile was one of the surprise performers – 13th in the first session and 10th in the second.

Tickford Racing had a mixed morning, with Cameron Waters its best contender in both, set to start the respective races from sixth and seventh.

James Courtney was last in the first session having failed to set a representative time, before improving to 13th in the second.

“Yesterday I was lifting through the kink,” he explained of his trouble in the first session.

“We changed the car and all the other boys were flat so, balls out, [I] had a crack, went through flat, got on the exit kerb, got a bit of knock off and then went deep into [Turn] 6.

“And then I missed another lap by one second, so that’s disappointing. It’s all on me.”