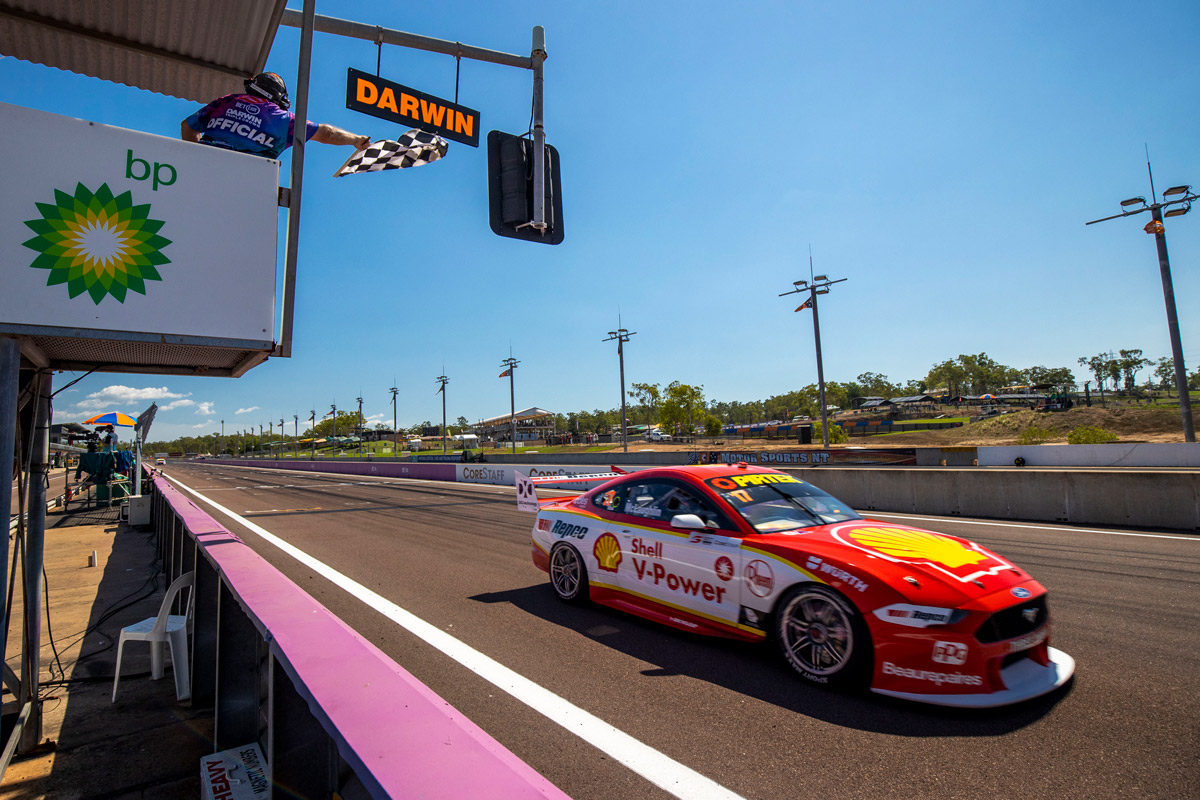 Scott McLaughlin extended his Virgin Australia Supercars Championship lead with a second win of the weekend at the CoreStaff Darwin SuperSprint.

It was a straightforward 38-lap contest for the Shell V-Power Racing driver, who made the most of his ARMOR ALL Pole to lead Shane van Gisbergen into Turn 1.

Shell Ford teammate Fabian Coulthard was the big winner at the start, leaping from sixth to third with a bold outside dive.

Coulthard was the first of the frontrunners to pit on lap five, with van Gisbergen in the next time by and keeping track position over his rival.

McLaughlin went a lap further before pitting but also kept his place over his key rivals, sailing on to a comfortable 50th career win.

Van Gisbergen was 9.7s adrift in second, holding off a fast-finishing Scott Pye who scored his second third-place finish for Team 18 in as many weeks.

“The car is sensational,” beamed McLaughlin, who stretched his points advantage over Jamie Whincup from 109 to 141 points.

“I got a pretty good start. As always, it was good, hard racing with Shane. I really enjoyed it but then our car, it just hooked up and took off.

“I knew Scotty [Pye] was going to come with fresh tyres there so I decided to try and pull a gap.”

Starting third, Pye lost a place to Coulthard off the start but rose to the lead by running a long first stint, not taking his pitstop until lap 26.

Despite losing valuable seconds with a minor off at Turn 7 on his in-lap, Pye rejoined from his stop in fourth, 3.5 seconds behind Coulthard.

He wasted no time closing the gap, burgling the final podium trophy from the Kiwi with a clean move at Turn 14 five laps later.

Pye then set about closing a three-second gap to van Gisbergen, finishing the race right on the tail of the Red Bull entry.

“The guys did an amazing job, the car is so much fun to drive now,” said Pye, who moved to Team 18 this season following three years at Walkinshaw Andretti United.

“It took me a little while to click with it and find the nuances with this car, going from what I was in, but for sure in the races I feel really confident.

“Following Shane, I was giving it everything I had, flashing the headlights… I wanted to get him so bad but just didn’t quite have it in the end.”

Coulthard finished fourth from Tickford Racing’s Cameron Waters, who spent the bulk of the race fending off the advances of Whincup.

Chaz Mostert came home seventh on the road but fell to 18th in the results thanks to a 15-second time penalty for spinning Nick Percat on lap 33.

The pair, who pitted on lap 17 and 18 respectively, had been in a spirited battle – Percat re-passing Mostert just prior to the contact at Turn 1.

De Pasquale had missed an early call to pit due to a radio issue and didn’t end up taking fresh tyres until lap 25, at which point he ran second to Pye.

Mostert wasn't the only one to cop a penalty, with Jack Le Brocq docked five-seconds for a tangle with Rick Kelly and Garry Jacobson hit with 15-seconds for spinning Macauley Jones.

A third and final 38-lap race this afternoon will complete the CoreStaff Darwin SuperSprint, with Shane van Gisbergen to start from ARMOR ALL Pole.