Shane van Gisbergen says Scott McLaughlin’s puncture made him “paranoid for the next few laps” during the second leg of the Adelaide 500.

The Red Bull Holden Racing Team driver won both legs of the Supercars season opener in the brand-new ZB Commodore, matching his 2017 result.

He was playing second-fiddle to Jamie Whincup, and his team-mate’s DNF meant the fight between van Gisbergen and McLaughlin would have been for the race win.

McLaughlin, though, slowed on the run to Turn 8 on lap 26 with a right-front puncture that is suspected to have been caused by a bolt on the circuit.

Having felt that he’d run over something through Turn 7, just ahead of McLaughlin, van Gisbergen feared the worst but was ultimately unscathed.

“I missed the apex at Turn 7 and heard a big twang, I ran over something metallic,” he said.

“And as I came through 8 I saw big smoke, so Scotty must’ve run over the same thing.

“That was a real shame, and of course I was paranoid for the next few laps, hoping my thing would hang together.

“But I definitely ran over something, no idea what it was. Hopefully we can have fairer battles for the rest of the year.”

Van Gisbergen assumed control of the race when Whincup stopped, but had David Reynolds come out right ahead after his second stop, when he already had Garth Tander right behind.

Reynolds was able to hold van Gisbergen out on cold tyres into Turn 4, but relinquished the place into Turn 9.

Asked by Supercars.com whether he would’ve been able to get past Reynolds if not on the Erebus Motorsport driver’s outlap, van Gisbergen said: “No.

“We had a little moment at Turn 4, I probably should’ve gone to the outside, but I had Garth right behind me, so I sort of covered,” he added.

“I knew I’d have one more shot through into 9 and sure enough he left the door open, which was a little surprising.

“He had a few laps newer tyres and my car wasn’t very good on traction.

“I had to really be good through 8 every time and maximise that, be good under brakes - which I think I was - and that made it hard to be passed.

“We detuned our car today [from Saturday], but in all the areas that people could pass us, we were good enough.” 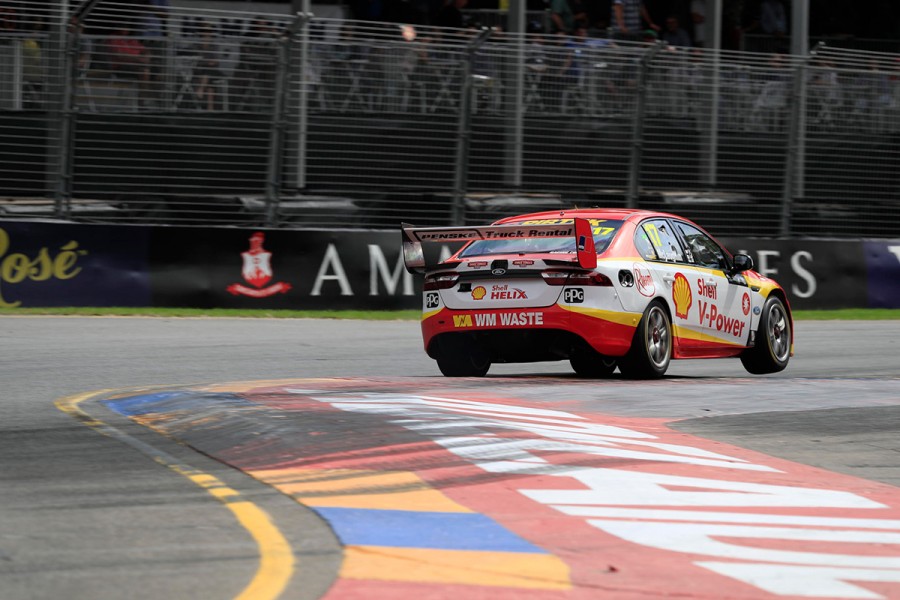 McLaughlin in the dark on puncture cause

Having finished third on Saturday, the puncture gave McLaughlin a slow trip back to pitlane and necessitated an extra pitstop.

McLaughlin rejoined after his third stop in 15th, but picked his way back through to 10th.

“I don’t really know,” McLaughlin told Supercars.com of the puncture's cause.

“It just went down into 8. It’s unfortunate. With no warning, it’s not ideal but it looks like it was a bolt.

“I didn’t see anything on the track, to be honest.”

The Shell V-Power Racing driver leaves the season opener fifth in the points, 93 behind van Gisbergen but 18 closer than he was this time last year.

“I was worse here last year,” he said. “Not much worse, but worse enough.

“Unfortunately it’s one of those deals. We’ve just got to rebuild and go again.

“I think we showed plenty of promise, we’ve got to find a bit more speed.”