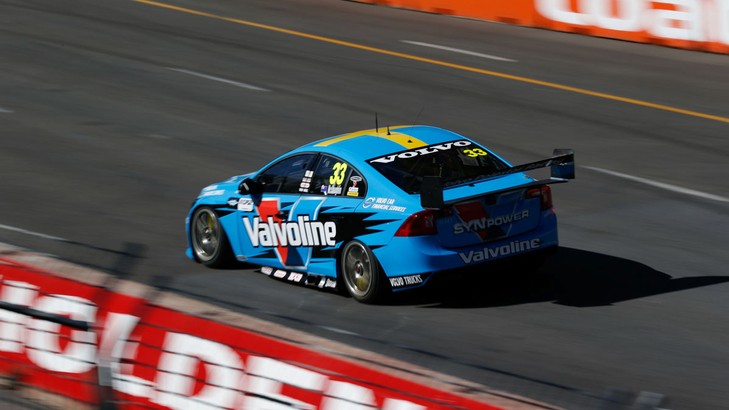 Despite spending most of the session in the garage while a power steering issue was fixed, Scott McLaughlin has made Volvo’s first V8 Supercars practice session at the Clipsal 500 Adelaide one to remember by setting the fourth fastest time.

“Far out, first session and we are in P4,” McLaughlin told v8supercars.com.au. “That’s awesome.

“I think it is a credit to the boys for getting me back out there,” he added. “We were on pretty good tyres, we had to try them and see what we had because we only had a little time.”

McLaughlin lost about half the 30-minute session in the garage while the power steering issue was being fixed. Team owner Garry Rogers said it was a different problem to the one that afflicted both S60s at the sydney.com pre-season test.

He revealed the team had also had power steering issues with the Commodores it ran last year.

McLaughlin said it was too early to make a judgement of where the Polestar-developed B8444S engine stood in relation to its competition.

“It’s hard to tell because I wasn’t around anyone. The biggest thing is it sounds different, it sounds cool.

“It feels a little fluttery right down low in the tight turns.”

McLaughlin’s effort outpointed sophomore V8 Supercars competitors Nissan and Erebus. Rick Kelly was sixth in the Jack Daniel’s Altima after sitting on top of the times early, while Lee Holdsworth was 16th in his Mercedes-Benz E 63 AMG.

Click here for full results from the first practice session at the Clipsal 500 Adelaide.

No Favouritism at HRT

Action Begins on the Streets of Adelaide

Thursday is Ladies Day at the Clipsal 500