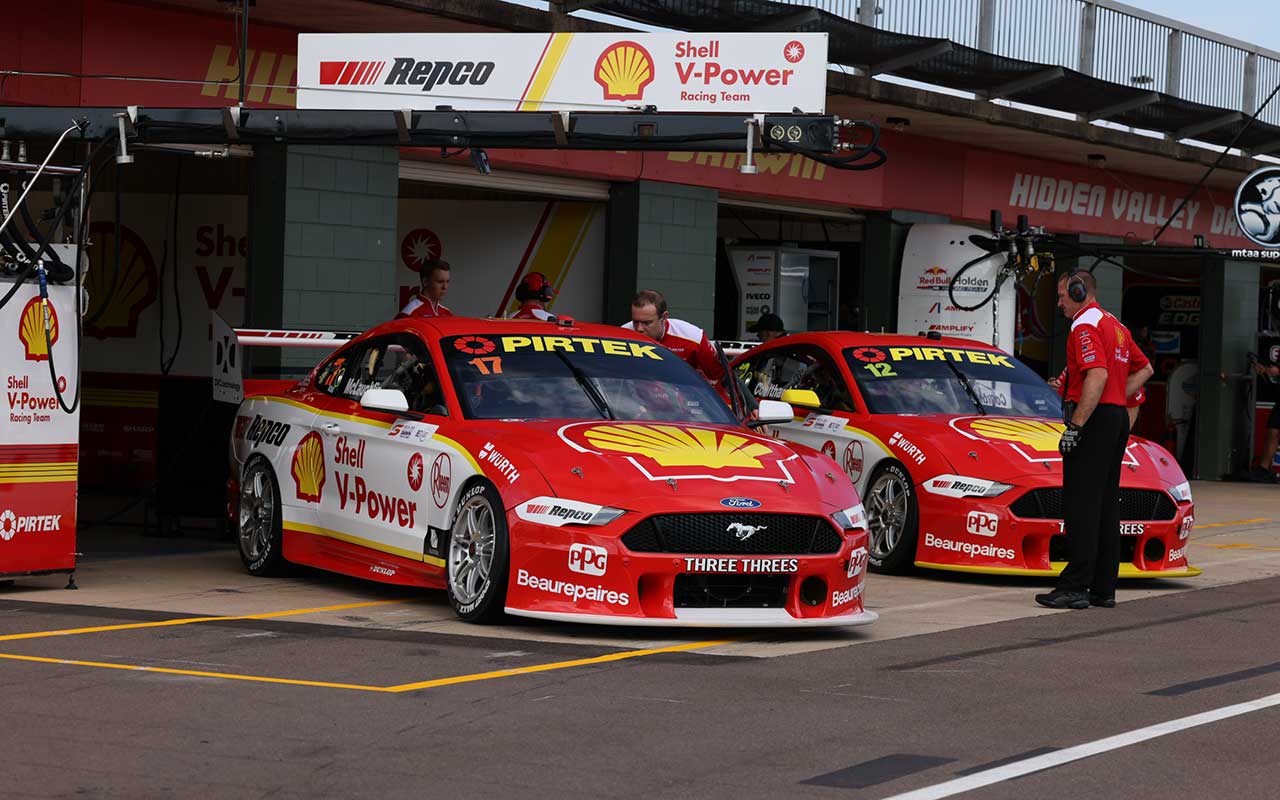 Scott McLaughlin turned the tables on Chaz Mostert in a dramatic second practice at the BetEasy Darwin Triple Crown.

Having been second to Mostert in Practice 1, the Shell Ford driver topped the second 30-minute hitout with a 1:06.4792s best.

Mostert was just 0.0357s adrift in second ahead of Cameron Waters, Scott Pye and Fabian Coulthard.

It was a rough session for the Red Bull Holden Racing Team, with Jamie Whincup crashing out at the 10-minute mark.

The seven-time champion lost the rear of his Commodore through Turn 7, sliding across the grass before making rear-on contact with the tyre wall.

"The car's been taily all day and I just lost the rear down the hill,” said Whincup, who set about helping his crew repair the damage.

“There's no run-off there so I went straight in the tyres. It's not a massive hit with the suspension, but it's still a lot of work to get the car out for qualifying."

Teammate Shane van Gisbergen, who complained of an unusual feeling in the rear-end of his car in Practice 1, ended the second session 15th after an early off at Turn 6.

Whincup wasn’t the only Supercars champion to whack the wall in Practice 2, with Tickford Racing’s James Courtney also caught out in the dying stages.

The right-front of the Boost Mobile Mustang went into the barrier at Turn 10, also leaving the Ford team with work to do ahead of ARMOR ALL Qualifying.

The final order of Practice 2 was clouded by the presence of both hard and soft compound drivers, as teams prepare for another weekend of strategically complex, mixed-tyre racing.

Many drivers tried both options in the second session, with McLaughlin setting his benchmark time on the softs before switching to the hard.

"The soft balance is pretty good. The hard balance is probably not exactly right. We expected that, it's just more of balance shift than we thought." he said.

"I'm happy with my balance, I think we can tune it on the bars which is ideal because we can do that during the race."

Unlike the recent Truck Assist Sydney SuperSprint, all cars must use hard tyres for this afternoon’s three-part qualifying.