McLaughlin followed a Saturday victory with his third win of 2018 and the 18th of his career, leading the bulk of the 250km and finishing 0.6687 seconds ahead of David Reynolds.

With the win, McLaughlin moves from 48 points ahead of closest-challenger Reynolds in the standings to 60 clear of the Erebus driver after 10 races.

The pair shared the front row of the grid, with polesitter McLaughlin keeping the lead after beating Reynolds into Turn 1.

He then edged away to be more than a second clear by the time the Safety Car was called for James Courtney’s stricken Commodore on lap seven.

A slightly-delayed caution call meant Fabian Coulthard, Shane van Gisbergen and Chaz Mostert were among those to pit one lap before it was deployed.

The rest of the field followed, Nissan in particular with shorter fills, giving Rick Kelly and Michael Caruso track position in first and third.

Reynolds sat between them, the trio all jumping McLaughlin, who had to wait before he could merge back into the lane in what became fourth.

As Kelly pulled away from Reynolds, extending his advantage to nearly three seconds, Reynolds, Caruso and McLaughlin ran in close proximity.

McLaughlin initiated the second round of stops when he pitted on lap 26, followed by Reynolds one lap later, Kelly two later and Caruso three.

The Shell Ford rejoined right behind Reynolds - the pair ultimately jumping the longer-filling Nissans - and looked set to pounce on warmer tyres.

Reynolds held on around the outside of Turn 2 and 3 on his outlap and then cemented the place on the inside at Turn 4.

It took three laps for McLaughlin to find a way past, doing so at Turn 2 for the effective race lead, in a carbon copy of his Saturday move on Jamie Whincup. McLaughlin, like in the opening stages, managed a steadily-growing advantage, his lead 1.3s with 10 of the 57 laps to go.

“I’ve had an awesome rocketship all weekend,” he said.

“We had to fight a bit there. Ludo [Lacroix, engineer] said to back off just that lap and I said ‘give me one more lap and we’ll try and get past him’ and we did.

“Everyone knows I need to be consistent all year to be able to get it [the championship] done, which we didn’t do last year, and today was a good start.”

Reynolds conceded he didn’t have an answer for McLaughlin, but still took his third podium of 2018.

“I had a lot of understeer in that first couple of laps and he just snuck past me, there wasn’t much I could do about it,” he said.

“He’s very fast here, they should rename him Phillip McLaughlin or something.

“My team did a good job. In practice we were nowhere and to turn it all around, using the set-up from the second car, is fantastic.”

Kelly was 5.5s behind McLaughlin and Reynolds when the second round of stops had played out, Nissan’s repeat of Saturday’s strategy netting a similar return.

The Castrol-backed Altima looked set for back-to-back podiums, but faced the threat of a closing Coulthard on the run home.

While Coulthard cut the gap, Kelly had enough left to withstand that pressure and keep third place, putting all three brands on the podium in both Phillip Island races.

The result is also Kelly’s first dual-podium weekend since the Victorian circuit’s round in 2009. 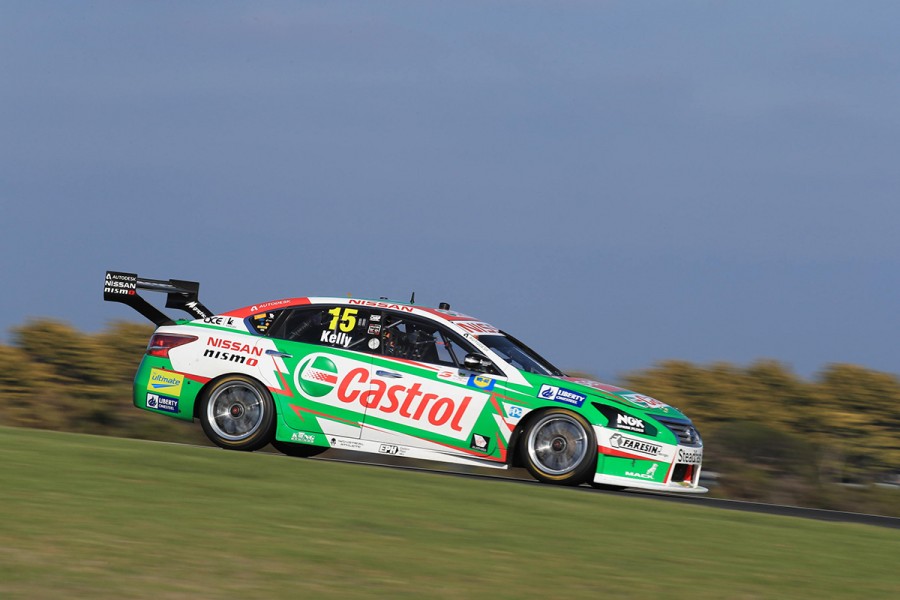 “We were so excited to be on the podium yesterday, but to finish third today we’re a little flat because we led the race and pulled away from the field in the middle stint, but couldn’t pit as early as those guys with the fuel we had on board,” he said.

“But a double podium for us is very exciting. It’s an incredible feeling for us. We don’t have some of the resources those guys have got but we’re doing our best.”

Caruso was a further six seconds behind in fifth, his best result of the season.

The three Triple Eight Commodores had a relatively muted day, other than a clash between Shane van Gisbergen and Craig Lowndes at Turn 11 three laps from home.

Lowndes looked set to be the team’s best finisher in sixth, but was caught by van Gisbergen on significantly fresher rubber in the closing stages.

Van Gisbergen was the last driver to make their second stop - on lap 36, 10 laps later than McLaughlin - and rejoined in 10th.

He passed Garth Tander, team-mate Jamie Whincup and Mostert, then ranged up behind Lowndes.

A tap on the back of the Autobarn Commodore sent Lowndes off-road exiting Turn 11; van Gisbergen waited for him to rejoin, and made a move stick exiting Siberia two laps from home.

Van Gisbergen leaves Phillip Island third in the championship, with Lowndes and Whincup fourth and fifth.

Mostert and a quiet Whincup crossed the line eighth and ninth, while Tander rounded out the top 10 ahead of Scott Pye.

Brad Jones Racing pair Tim Slade and Nick Percat took 12th and 13th, ahead of Andre Heimgartner and Mark Winterbottom, who had an off-track excursion at Turn 2 in the final stint.

Percat’s 13th came from the rear of the grid after a weekend plagued by front-splitter problems, contesting the race with one of Slade’s spares fitted.

Anton De Pasquale ran eighth early on, but had to double stack behind Erebus team-mate Reynolds during the Safety Car stops.

That dropped De Pasquale to 18th, and he was eventually the first rookie home in 16th.

Courtney was two spots ahead of De Pasquale in his Walkinshaw Andretti United Commodore in the early going, but lost drive and slowed on lap six.

He stopped on the inside grass at pit entry, prompting a Safety Car period the following lap.

“I was pulling the lever but no gears were working.

“We think the final drive, or the crown-wheel and pinion I think it’s called, something technical like that, has exploded.

“That was disappointing. It started out pretty well, but it is what it is.”