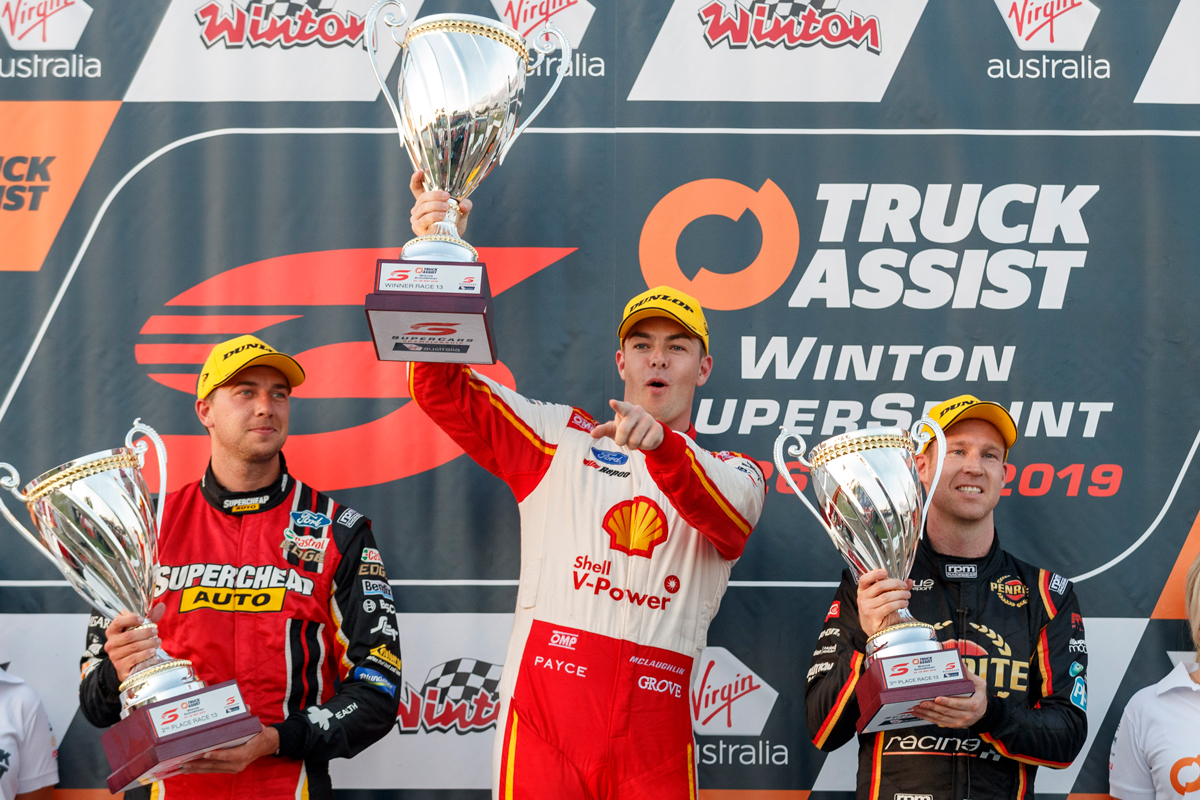 Winton winner Scott McLaughlin says his decision to shortcut three corners after being knocked off the road on lap one was a matter of safety.

McLaughlin had overtaken team-mate Fabian Coulthard for second heading into Turn 5, only to cop a bump in the left-rear from his fellow Kiwi.

That sent both Shell Mustangs into the outfield; Coulthard rejoining at the following corner and dropping to 23rd, while McLaughlin emerged at Turn 8 with the lead.

McLaughlin then immediately backed off to let James Courtney and David Reynolds through, slotting back into third.

Coulthard copped a 15-second penalty for his hit on McLaughlin and finished 15th, while McLaughlin took the victory, extending his championship lead to 232 points.

As has been the case in previous years, drivers’ briefing notes for Winton state that “cars running off at T5 must rejoin prior to the T9 flag post”.

While that meant McLaughlin went unpenalised, the move proved a hot topic post-race, with even McLaughlin admitting a car taking a shortcut is “not what you want to see”.

Asked whether it was fair to take a shortcut and win, McLaughlin said: “It’s a hard question because I felt like I had so much momentum going off.

“One thing for me is – for next year, I don’t know what they’re going to do, and it’s been there for ages – is the ditches [in the infield].

“That was a big problem in this case and then obviously wet grass, slick tyres, so I was going off there at a rate of knots.

“By the time I had gathered it up, I half went left and next thing I know, Courtney and a few others are turning the corner (Turn 7) and I wasn’t prepared to go the wrong way.

“So I just went straight through; for my own safety, for everyone else’s safety.

“I wasn’t going the wrong way on the field and I basically said to myself, ‘if I cop a penalty, whatever,’ but it was just one of those things.

“So that was my decision at the time, it was pretty hard to make a decision at that rate of knots and whatever but the bottom line for me (was) I wasn’t going against the field.”

A shortcut controversy last occurred at Hidden Valley in 2015, where David Reynolds went off at Turn 5 and rejoined at 7 on his way to victory.

Although he went unpenalised, rules at the circuit were tightened up for the following year, with drivers informed they would be sanctioned for a similar infringement.

“There’s a lot of tracks that have a lot of different loopholes,” said Mostert.

“It’s completely in the rules [for Winton], as long as you rejoin by Turn 9 flag post, it’s all good.

“I don’t know if his team-mate (Coulthard) was on the same rule or whatever, but it is what it is.

“At the end of the day as long as no one got hurt, like Scotty said, it was the best decision to make sure that there was no more crashing.”