Scott McLaughlin claimed a fourth-consecutive Supercars victory, completing a sweep of the Perth SuperSprint from 19th on the grid.

The Shell V-Power Racing driver had a tough start to Sunday, after winning on Saturday, failing to get out of the first phase of ARMOR ALL Qualifying.

McLaughlin had only won from beyond the first two rows of the grid once - from 13th on the Gold Coast last year - but got the job done from 19th.

With a pair of victories at Phillip Island and now Barbagallo Raceway, McLaughlin leads Shane van Gisbergen by 158 points in the championship after 12 races.

He led home David Reynolds by eight seconds, the Erebus driver surviving an off at the very last corner, while Craig Lowndes raced from 25th to complete the podium.

Van Gisbergen was slow away from pole, dropping in behind team-mate Jamie Whincup and Chaz Mostert into Turn 1.

The Safety Car was called after just four laps, to retrieve James Golding’s Commodore from the Turn 1 gravel, prompting the entire field other than Will Davison to pit.

In a congested lane, Mostert, Reynolds and Andre Heimgartner jumped Whincup, while van Gisbergen had to double stack and fell to 18th.

After the restart, Davison lost the lead to Mostert and faded down the order, sporting damage from a Turn 6 clash with Michael Caruso on lap two.

Mostert and Reynolds cruised away at the front of the field to be more than four seconds ahead of the pack of Heimgartner, Whincup and McLaughlin.

The Shell Ford of McLaughlin was a big mover early, gaining several places as he dodged a Turn 5 melee on the opening lap.

From 19th he was up to 12th before the Safety Car was called, then gained another five places in pitlane.

Whincup started the second round of stops on lap 26, followed by Mostert, Heimgartner and McLaughlin the next time around and Reynolds on lap 33.

It was McLaughlin who came out at the front of the group, with a fuel-timer issue leading to a slow stop for Mostert, who dropped out of contention.

By lap 50 of the 83, McLaughlin led Reynolds by eight seconds, with Heimgartner third, two seconds further back.

Whincup had lost places to James Courtney and Lowndes on fresher tyres, while the likes of Rick Kelly and van Gisbergen had already pitted for a third time, committing to four stops.

After making their third and final stops on lap 60 and 61, McLaughlin and Reynolds were first and second, split by six seconds.

With 10 laps to go, Reynolds had that gap back to two seconds, but that was as close as it got. 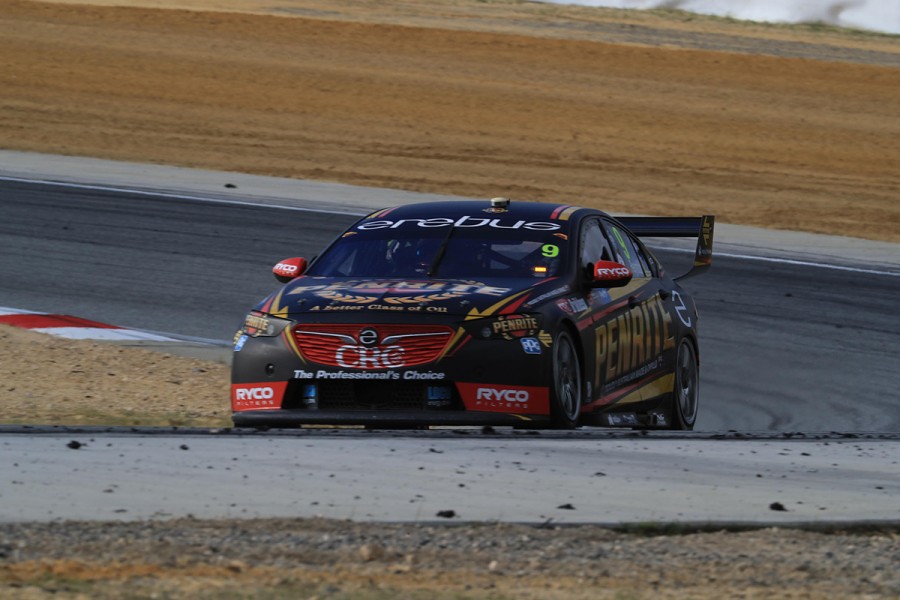 McLaughlin edged away again to be three seconds clear, even before Reynolds fired off and through the sand at the final corner.

“I’m stoked. I couldn’t believe it. These guys just gave me an unbelievable car and the strategy was on point,” McLaughlin said.

“We made it difficult for ourselves but brought it back.

“I joked to DJ [Dick Johnson] before we went out and said ‘I reckon we can win this thing’.

“Sort of deep down I was like ‘maybe’, but I didn’t bloody think I was going to do it!”

Reynolds was able to get back on track and keep second place, his fourth podium of 2018 to remain third in the championship, 168 points behind McLaughlin.

“It was a pretty dick move on the last corner of the last lap, but luckily I had a gap to Craig and we maintained second,” Reynolds said.

“I was a good race from Scott. He had a lot of pace, but it was the best performance I’ve had here.”

From the back row of the grid, Lowndes moved from 25th to 21st before the Safety Car, fell to 23rd shortly after it and then worked his way back into the top 10 by lap 23.

He made his second stop on lap 31 and third on lap 60, showing good pace on used tyres through each stint to pick up places.

Lowndes ultimately passed Courtney for third place at Turn 6 on the penultimate lap.

“The car was really good, for me to be able to do the long stints in the middle was really important to close the gap to the guys in front,” Lowndes said.

“We had good battles throughout the race but I can’t thank the guys and girls enough for giving me the car to do what I did.” Courtney held on for fourth, while four-stopper van Gisbergen and Whincup took fifth and sixth in their Red Bull Holdens.

Van Gisbergen sat 12th after taking his fourth stop with 18 laps to go, but made his way up to fifth place by the end.

The Kiwi’s final position gain came after a clash with Heimgartner on the run to Turn 3 on the final lap, forcing the Nissan off track.

That meant Heimgartner also lost places to Whincup and Percat, who finished sixth and seventh.

Kelly crossed the line in 10th, ahead of Mostert and Simona De Silvestro, the Swiss driver taking her best Supercars result.

Stewards will investigate an incident exiting Turn 5 on the opening lap that appeared to be prompted by contact between Richie Stanaway and Scott Pye.

It resulted in Pye being spat out of the pack, with Fabian Coulthard, Mark Winterbottom and James Golding all in the ensuing concertina.

They were all able to continue, but Winterbottom picked up suspension damage from side-to-side contact with team-mate Stanaway and finished a lowly 21st.

In addition to the first-lap melee, Coulthard ran off at Turn 1 on lap 27 on his way to 16th, one spot behind Pye.

Golding went around and into the Turn 1 gravel trap on lap four, causing what was the only Safety Car period, while running between Todd Hazelwood and team-mate Tander.