Scott McLaughlin beat Jamie Whincup to take his second victory of the 2018 Virgin Australia Supercars Championship, in the opening leg of the WD-40 Phillip Island 500.

Last year’s title protagonists, and the top two drivers in the 2018 points, slugged it out across 250km, with Whincup leading until McLaughlin found a way past with 17 laps to go.

Shell V-Power Racing’s McLaughlin went on to win by 0.8960 seconds and take the championship lead, while Nissan’s Rick Kelly rounded out the podium in his 500th Supercars start.

Sharing the front row after Fabian Coulthard was excluded from ARMOR ALL Qualifying, polesitter McLaughlin and Whincup ran side-by-side through Turn 1 at the start.

Whincup braved it on the outside, which set him up to take the inside line and race lead at Turn 2.

As Whincup edged away from McLaughlin at the front, the pair pulled well clear of third-placed Shane van Gisbergen during the first stint.

The margin between the leaders got out to 1.5 seconds before McLaughlin closed to be within four tenths by the time they pitted together at the end of lap 17.

Whincup’s Red Bull HRT crew did just enough to get moving before the Ford dropped, McLaughlin having to yield and then prop at the pit-exit cone, losing a second in the process. 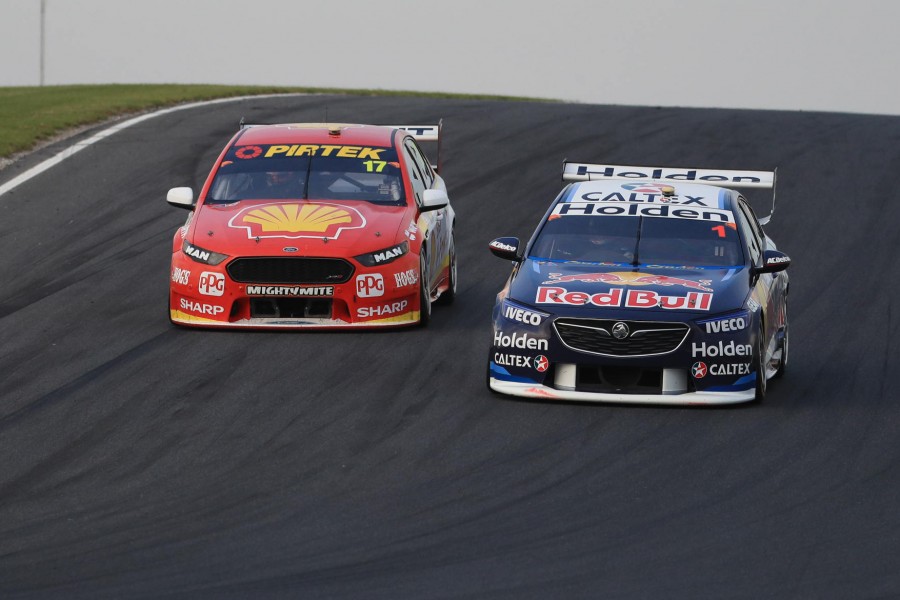 Like in the first stint, McLaughlin chipped away at Whincup’s initial, cold-tyre advantage and the pair stopped together again on lap 31.

Once more, the crews could barely be separated in the lane, Whincup keeping the ascendancy with McLaughlin having to slot in behind, with 25 laps to go.

McLaughlin couldn’t find a way past Whincup, even with modifying his technique through the last corner to get a better run onto and down the main straight.

Finally, with 17 laps to go, McLaughlin pounced on a minor opening left by Whincup through Southern Loop to slice down the inside and take the lead.

By the end of the lap he was eight tenths clear of Whincup, with the margin only varying slightly on the run home.

With his 18th career victory, McLaughlin displaces Whincup at the top of the standings, and will start Sunday’s second leg with a single-point advantage.

“I was working on him for ages and I needed to get closer into [Turn] 1,” McLaughlin said.

“I was good there, but his thing was so fast down the straight, even in the tow he was pulling away from me.

“Anyway, we had a lot of fun. I think the battle between Shell V-Power Racing and Red Bull is fantastic and I’m glad to be a part of it.

“I always have great battles with Jamie, obviously last year was amazing, but it’s always sweet when you get on top.”

The podium is Whincup’s seventh of 2018, all in succession after his Race 2 DNF in Adelaide.

“At the end of the day those guys did a better job,” Whincup said.

“There’s no parity issues, nothing about carbon bonnets or anything, they just did a better job and we’ll work harder next time.”

Rick Kelly sat sixth early but jumped up to third during the first round of stops with a slightly-shorter fuel fill.

The Castrol Nissan had the pace to make the most of that track position in the middle stint, keeping third after the second stops.

He crossed the line in third - a late flurry putting Kelly 2.5s behind McLaughlin - for his first podium since the 2015 finale in Homebush, and the first for an Altima since Michael Caruso’s Darwin ’16 victory. 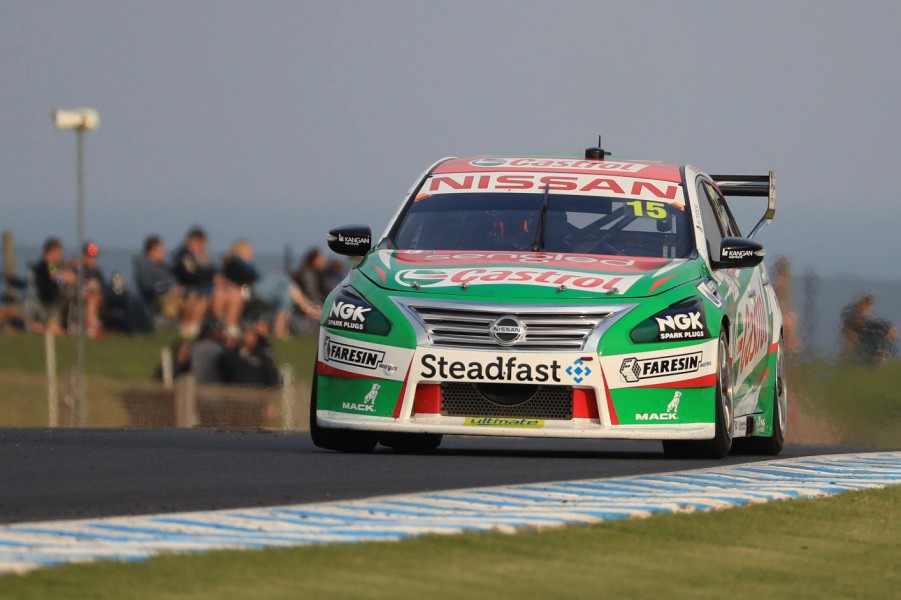 Van Gisbergen could not go with Whincup and McLaughlin, and then started to suffer intermittent power-steering outages.

Seen trying to stretch his arms out off the wheel on the front straight, van Gisbergen soldiered on in fourth place, having been jumped by Kelly.

Triple Eight evaluated fitting a larger steering wheel to reduce the ratio and inputs required at the second stop but left the 2016 champion in situ for the run home.

Van Gisbergen was caught by stablemate Lowndes, who had an easy passage past into Turn 1 with six laps remaining to take fourth.

Lowndes closed to within one second of Kelly, but dropped off on the last lap to let van Gisbergen back past.

Reynolds and top rookie De Pasquale crossed the line seventh and eighth, while Will Davison and Scott Pye rounded out the top 10 in a chain that also included Tim Slade, Garth Tander, Coulthard and Mark Winterbottom.

Coulthard started last, after qualifying second but being excluded from the session for a rear-wing breach.

He got up to 18th on the first lap, but found progress from there more difficult, and ultimately crossed the line in 13th.

Winterbottom fell to the bottom end of the top 20 but regrouped to finish 14th, two spots behind Tander.

Michael Caruso shared the last row of the grid with Coulthard and deployed an aggressive strategy that included pitting at the end of lap one to finish 18th.

Simona De Silvestro was turned around at MG by James Golding on lap eight, Golding handed a 15-second penalty as the pair finished 23rd and 25th.