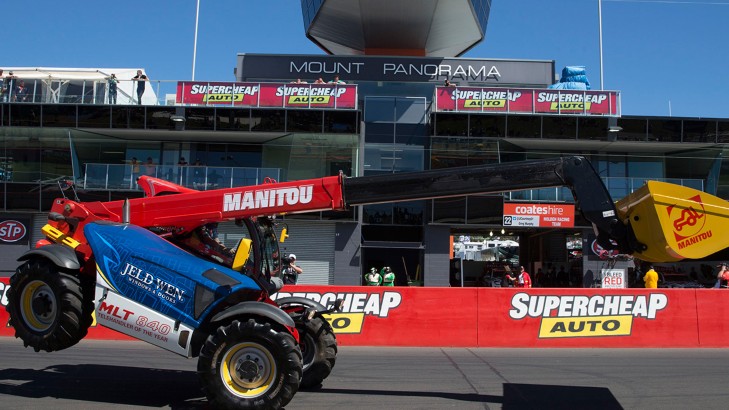 The Manitou Group and V8 Supercars today announced their continued partnership, which sees Manitou retain their position as the provider of recovery equipment at V8 Supercars Championship events.

This extends the relationship between Manitou and V8 Supercars into an eighth season, with the Manitou machines allowing fast track clean-up, which minimises disruption to V8 Supercars races.

Manitou Australia's Managing Director, Stuart Walker, says that the partnership between Manitou Group and V8 Supercars provides great value to the company, and he expects 2015 to continue the trend.

"It is fantastic to be able to continue the relationship with V8 Supercars. Our machines are purpose built for this kind of work, operating in rough terrain, always providing maximum reliability and ease of use," Mr Walker said.

"We're excited to have our Manitou brand involved in the sport, particularly with the new media deal providing more coverage than ever before. Our machines are used at V8 Supercars races, along with support races that require this specialised equipment, so we couldn't be more pleased."

V8 Supercars Director of Sport and Operations, Damien White said that the equipment provided by the Manitou Group means that on-track disruptions are minimised, whilst safety is increased.

"These machines mean our officials spend less time on the circuit, which is always a good thing. This also benefits racing, as any damaged cars are quickly removed, reducing the length of safety car periods," said Mr White.

"Our officials regularly comment on the ease of use of these machines, and we're very happy to be continuing the relationship into 2015 and beyond."

Manitou machines will make their next appearance at a V8 Supercars Championship event at the Tyrepower Tasmania SuperSprint, at Symmons Plains Raceway across the weekend of March 27-29.